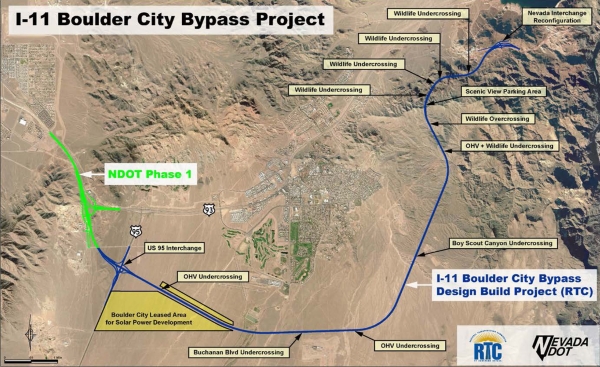 The expected completion of Phase 1 of Interstate 11 was confirmed for 2018, according to the Regional Transportation Commission and the Nevada Department of Transportation.

The RTC is constructing 12.5 miles of I-11 coming from south to north, starting near the Hoover Dam bypass bridge and ending just before Railroad Pass casino.

NDOT will construct the smaller portion of the I-11 bypass, building the beginning 2.5 mile stretch that comes from the north, from Foothill Road to Silverline Road, with a full diamond intersection change at Railroad Pass.

Tony Illia, public information officer for NDOT, said the portion of current U.S. Highway 95 that is in front of Railroad Pass will become casino property once the interstate is completed.

“We had a land easement over part of the Railroad Pass hotel-casino property for U.S. Highway 95, as currently configured. Under the new design, however, we will no longer be using part of that section of highway,” Illia said. “The new bypass interstate effectively turns it into an access road for the hotel-casino. As a result, we released our easement to the Railroad Pass hotel-casino, as required under Nevada Revised Statute 408.160 once an easement is no longer used for highway purposes.”

When the Federal Aid Highway Act of 1956 was passed by President Dwight D. Eisenhower, it cost about $2.4 million per mile to build a stretch of interstate. Today, Phase 1 of the Boulder City bypass project will cost $318 million, according to Illia, which translates to $21.2 million per mile.

I-11 will be one of 10 interstates being built in America during the next 10 years.

The RTC has a set schedule of construction, according to Public Affairs Administrator Monika Bertaki, who said the construction is being done in 12-hour shifts.

NDOT’s construction plans are relatively the same, according to Illia, who said the agency has 110 workers on site who work from 6 a.m. to 5 p.m. Monday through Friday.

Within the Phase 1 plan for NDOT is restoring the railroad tracks severed by U.S. Highway 93. To do that, NDOT will build a 180-foot steel-truss bridge, allowing the main freeway to pass underneath, according to Illia.

NDOT’s portion of the bypass is scheduled to be completed in January 2018 while RTC’s portion is expected to be done in late 2018.

Neither agency said they have encountered anything that would push back completion dates, and construction is on track.

Both said they are taking extra precaution with the naturally occurring asbestos that had many citizens worried about the project.

According to Bertaki, the RTC is using recommended EPA mitigation measures to minimize exposure to any dust. Those measures include reducing vehicle driving speeds, avoiding overloading trucks and cleaning equipment and vehicles to prevent tracking soil out of the work area, among others.

NDOT is taking some of the same preventive measures, according to Illia.

“We have installed work zone air monitors where samples are collected daily and analyzed in a state-of-the-art testing lab,” Illia said. “The project will shut-down work during extremely windy days, and all workers must clean their clothes and boots before exiting the jobsite by either changing clothes or using a High-Efficiency Particulate Air vacuum. “

Both agencies also require workers to take a three-hour, site-specific training course about naturally occurring asbestos given by a certified industrial hygienist.

On Nov. 5, a bill to extend I-11, the Surface Transportation Reauthorization and Reform Act of 2015, passed through the House of Representatives, according to a press release from Sen. Dean Heller. The bill passed, 363-64.

The act would allow the interstate to be extended from Las Vegas to Northern Nevada. Although funding is not yet available for the northern extension, Nevada lawmakers say federal funding eventually will come.

The main goal of having I-11 run from Canada to Mexico would be to help boost the economy, mobility and national defense systems, Heller said.

“(Thursday’s) House passage of the I-11 extension is very exciting news for the state of Nevada, and I am proud to see this project moving closer to becoming a reality,” Heller said. “Not only does this extension have the potential to open even more markets for tourism and trade, it means good paying jobs and an economic boost Nevadans are eager to see.”

Here are a few figures relating to the construction of Phase 1 of Interstate 11, which is set to be completed in the winter of 2018.