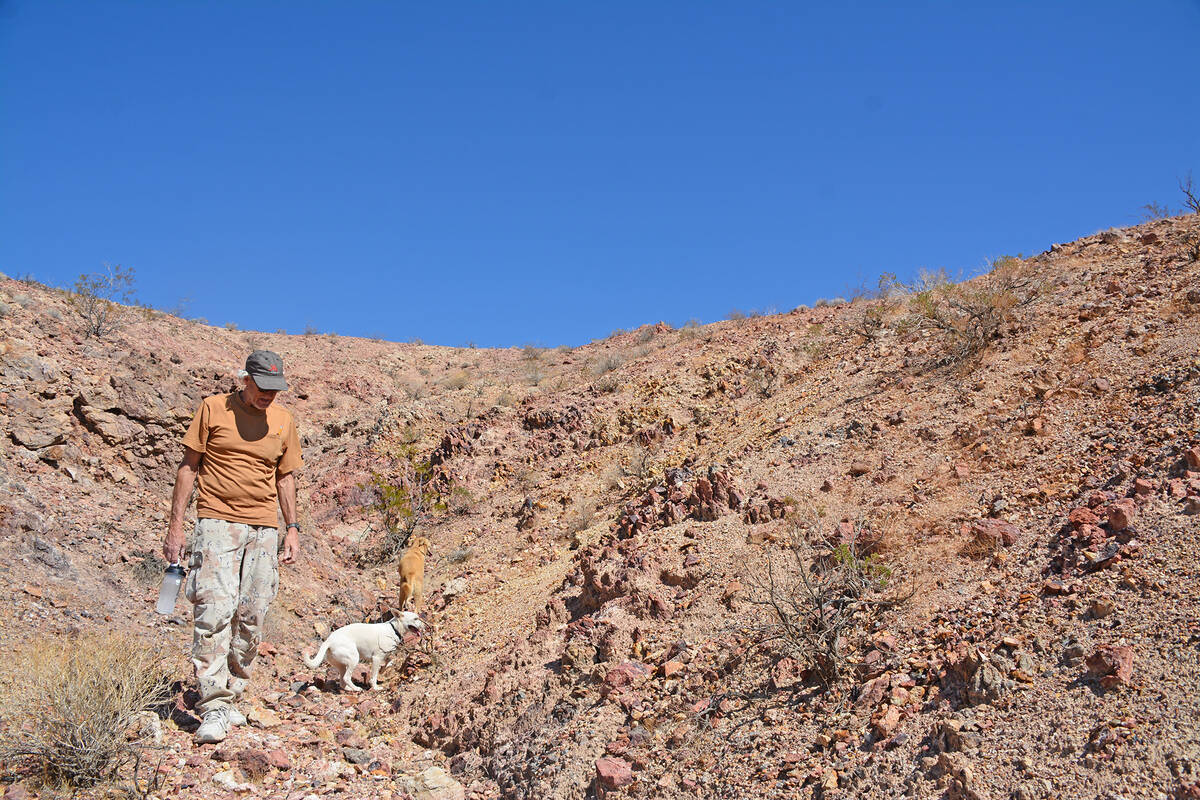 (Celia Shortt Goodyear/Boulder City Review) Charles Chaffee walks with his dogs, Luna and Sunny, around the site where he found a skeleton during a morning hike in the desert about a mile away from his neighborhood.

Charles Chaffee Resident Charles Chaffee recently found this right shoe in the desert near his home. It is part of some human remains he found in the area.

What started out as a usual morning hike turned into something bizarre when Charles Chaffee found human remains in the desert near his home.

Recently, Chaffee was hiking with his dogs in the hills behind his house when he found what turned out to be a femur bone. In the next several days and weeks he found more bones, clothes and someone’s belongings.

“I was hiking (on March 22) with my dogs up in the hills behind my house like we have done for months. … I saw something very white a few hills over so we headed over to see what it was,” he said. “Turned out to be a large bone the size of my femur. I sent a picture to my daughter, who has a nursing doctorate.”

Chaffee said his daughter told him it could be a human bone and he should probably report it.

“The Boulder (City) Police came to the house to check it out,” he said. “After Googling a femur and a bighorn sheep leg bone, we concluded it looked like a sheep bone.”

On March 24, Chaffee said he was out for his morning hike and saw “something very white up in a canyon.” He checked it out and found a rib bone by a riverbed below a canyon. He looked around and found more bones and clothes.

“Looking up, I saw more bones including an entire vertebra, two pelvic bones and more ribs,” he said. “Next was a large bone, ribs and the top portion of a shoe. Next was a shirt, torn, stained with blood and still buttoned. The investigation (then) found a pack of cigarettes and headphones in the shirt pocket. Next was the upper cap of a skull and the lower jaw with four teeth.”

Chaffee said he called the police, who came out to the scene and confirmed it was a human skeleton.

“Officers from Boulder City Police Department were called to a remote area in the desert, located about a mile from the nearest home,” said Communications Manager Lisa LaPlante. “The caller found human remains that appeared to be quite old … . There were no signs of trauma visible to responding officers. The Clark County coroner’s office removed the remains and their office is working to determine how old the remains are, the cause of death and the identity of the individual.”

LaPlante also said no identification was found at the scene.

Chaffee said while the police were there, he found two other sections of the skull and the police also took the first bone that was found in case it was part of the skeleton.

A week later, Chaffee was hiking in the same area to see if he could find anything else when he saw another bone.

“When I got there, it looked like part of the skull,” he said. “When I picked it up and flipped it over it was the … upper teeth. One tooth immediately fell out then I noticed it looked like there were two holes drilled in it where there are a couple of teeth missing. Might be they had dentures.”

During his hikes after finding the bones, Chaffee said he also found what looked like a spoon that had been used to cook drugs.

“It was by a campfire at the top of the hill where I found the remains,” he said. “Could have OD’ed, fallen, someone put the body there because it’s in a very remote place that you can’t see from the top or bottom.”

He also found the missing right shoe in a canyon, north of where he found the first remains.

All the bones and items have been turned over to the police department and the case is under investigation. According to the coroner’s office, the case is pending and no details have been released.