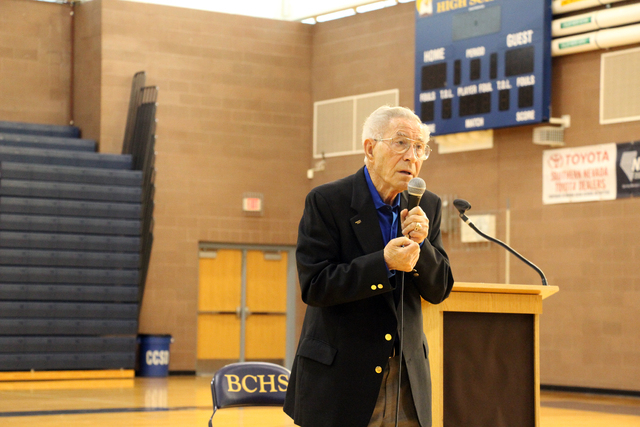 As the Boulder City High School auditorium fills up with students, teachers, parents and other residents of the community, Holocaust survivor and speaker for the evening Ben Lesser sits in front of the podium quietly surveying the crowd that has come to hear his story. As he stands up and is introduced, there is a silent respect in the air.

“You are the last generation who is privileged to listen to a live survivor,” Lesser begins. “The responsibility now falls upon you, and we hope that you will be repeating this to your offsprings and so on. We cannot allow this world to fire amnesia.”

Throughout his two-hour talk Tuesday evening, Lesser describes in vivid detail the horror he witnessed and experienced throughout his journey of being forced to abandon his home, the separation from his family and doing whatever he could to survive notorious concentrations camps Auschwitz, Buchenwald and Dachau.

“I was no longer Ben Lesser. I was 41212.” As he speaks of the Nazis, he refers to them as “monsters” who once were civilized, but had been dehumanized and brainwashed by Adolf Hitler, the man who used his mouth as a lethal weapon.

“They pulled children out of their beds and into dump trucks,” Lesser said. “These civilized, cultured people had machine guns at the end of each truck and as these parents were running behind screaming for the children and the children screaming for the parents, they opened the machine guns, fired and mowed down the parents. That resonated throughout Europe.” The Las Vegas resident also recounts meeting infamous German Schutzstaffel and physician Dr. Josef Mengele as he first entered the Auschwitz concentration camp.

“I did not know this doctor was Dr. Mengele, the Angel of Death,” Lesser said. “He decided who shall live and who shall die with the flip of his finger. Just like that.”

Out of seven family members, only Lesser and his sister Lola survived the Holocaust.

After his talk, Lesser received an incredible amount of applause from the audience and was greeted with many handshakes and gratitude.

“What he had to say in his living testament of depravity as well as strength of human beings was definitely eye-opening, and I think the message he had was inspiring and empowering to everyone,” BCHS student Sabrina Snow said.

Lesser found his way to BCHS through one phone call with teacher Canaan Petersen.

“Seizing the opportunity and bringing Ben in is incredibly special for this school and community,” Petersen said. “Eventually, these men and women are not going to be around anymore and we need to take this opportunity to listen, remember and spread his message.”

Lesser has established the Zachor Holocaust Remembrance Foundation that allows others to know more about his story and the Holocaust, while also serving as an outlet for people to fight against discrimination.

“If you work hard and study hard, there is nothing in this world that can stop you,” Lesser said. “No one in this wonderful country holds a gun against your head and says that you cannot do it, and I show how it is being done to succeed. If you learn that, you will have a wonderful life and a wonderful future.”

For more information on Ben Lesser, his story and the foundation, visit https://www.zachorfoundation.org.