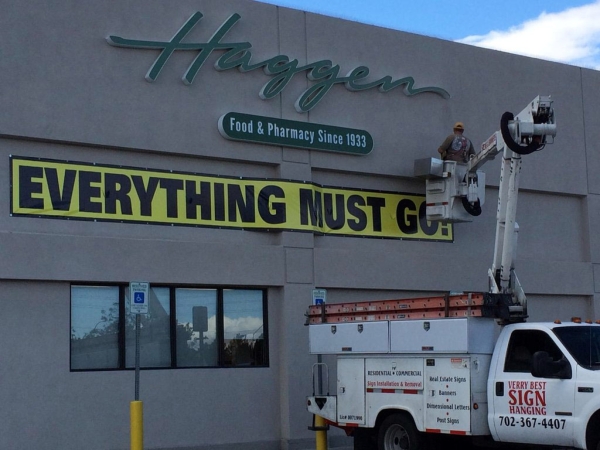 Boulder City residents’ frustrations continue to grow as they struggle with the lack of choice when shopping for groceries after Haggen closed late last year.

The Pacific Northwest grocery chain closed its Boulder City store in December after filing for bankruptcy, leaving Albertsons as the sole grocer in town.

Since then, residents said they have have seen prices increase, longer lines and less product in the store.

Jill Bunch, the owner of Chilly Jillyz, said she believes Albertsons is taking advantage of the situation.

“I think it’s difficult. I think that even though it is a small community that we live in, Albertsons is busy all the time,” said Bunch, who has been living in Boulder City for four years. “Lines are long and prices have increased. Supply is low and demand is high, and they know that.”

“You would think a small town would have more than one grocery store available,” said Las Vegas resident Tony Simpson, who was in Boulder City while visit Lake Mead National Recreation Area. “You have a lot of tourists coming in and out of this town, they shouldn’t have just one option. I had to wait what felt like forever to get to the front of the line because there was so many people. Some people are in a hurry and can’t wait 15 minutes to buy their groceries.”

Though that may be the perception, Albertsons officials say they are doing all they can to be a good community partner.

“Albertsons prices in Boulder City are identical to prices found at Albertsons locations throughout the Las Vegas area. Albertsons would never intentionally take advantage of customers, and daily we strive to provide an outstanding shopping experience, along with competitive pricing, to all customers,” said Nancy Keane, public affairs and government relations for the grocer.

She said they also work diligently to reduce customers’ wait times in line with their Three’s a Crowd program.

“Albertsons strives to monitor the number of customers in any given line at checkout lanes. If a line becomes too long, frontend managers are required to call for additional cash register assistance,” Keane.

Haggen entered the local market when it purchased the Vons on Boulder Highway as part of an agreement with the grocery store chain to acquire 146 stores from Albertsons and Safeway, a requirement from the Federal Trade Commission when the two companies merged.

Shortly after it opened, Haggen filed a lawsuit for more than $1 billion against Albertsons, claiming the company made “coordinated and systematic efforts to eliminate competition” and made “false representations to both Haggen and the FTC about Albertsons’ commitment to a seamless transformation of the stores into viable competitors under the Haggen banner.”

The resulting poor sales forced Haggen to file for bankruptcy and close 127 stores on the West Coast, including the Boulder City location.

The move left Boulder City, a town with a population that hovers around 15,000 people, with only one full-service grocery store.

According to Mayor Rod Woodbury, the city is working to improve the situation.

Woodbury said the Economic Vitality Commission of Boulder City has talked to different grocery stores, though the talks are still preliminary and no letter of intent has been signed.

“This is a big issue for the city and we are doing whatever we can to try and track the right people down and get suggestions going,” Woodbury said. “Obviously, I haven’t talked to every resident in Boulder City regarding this issue, but I have talked to a good 10 to 12. I agree with them we do need another grocery store in Boulder City.”

The fact that Vons and Albertsons were able to sustain business for long periods of time in that location are selling points, said Jeremy Foley, a third-party leasing broker for Cushman and Wakefield, which is representing the Haggen building.

“The demographics on paper are as strong as some operators might want to see. We have to walk them down the path of the tourist traffic this area brings, and how Vons was here for 30 years and Albertsons has been here for 17 years,” Foley said. “The market has supported two grocery stores in the past.”

According to Foley, the process is taking longer than usual because there is only so many grocery stores out there that are interested and can fill that specific space.

“It definitely is a process. We have gotten some nos and some maybes, but no yeses yet,” he said.

According to Jill Rowland-Lagan, CEO of the Boulder City Chamber of Commerce, a lot of time is being devoted to finding a potential suitor to take over the vacant store.

“There is no timeline as of right now to get a new store but we do have a couple people interested in the store,” Rowland-Lagan said. “There is traction in some of those things, and there is always going to be turnover in the life cycle of businesses. We are doing the best we can to help those business owners come to a conclusion.”

The location where Haggen once stood will continue to be boarded up until a resolution comes into play, according to Rowland-Lagan.

“We want the business community to thrive,” Rowland-Lagan said. “Obviously the best possible outcome is to have a vibrant, economic engine in downtown and along the business corridor.”