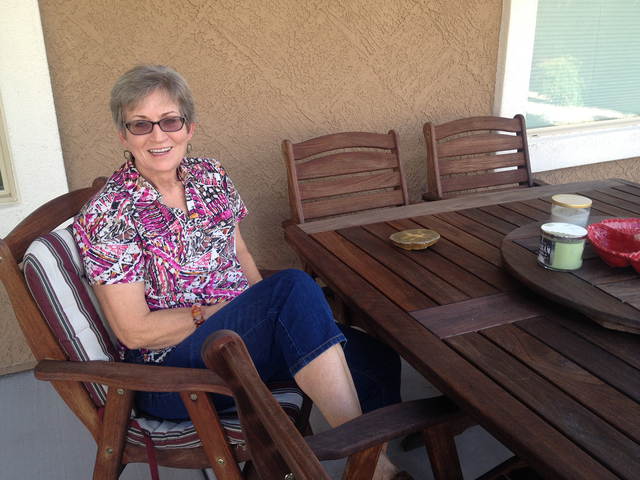 Chey Jones clings to her family and her faith when times are tough. As a lifelong Southerner, faith and family are two of the most important things in her life. It’s in her blood.

Even when she was diagnosed with breast cancer in fall 2000, the Memphis, Tenn., native knew she would pull through. There was never a doubt in her mind.

It was only a year after her son Cory, who was in his mid-20s, had been diagnosed with melanoma. It reached stage 4, and Jones said it was one of the most difficult periods in her life.

“It was a real struggle. We weren’t sure if he was going to survive,” she said. “He went through a lot of chemo. He took the most rigorous chemo you could take.”

After three months of intense chemotherapy and radiation that drained him physically and mentally, Jones said the doctors told her they would keep giving him chemo until either his organs failed or the cancer went into remission. Cory’s condition began to improve, and from then on Jones knew she could get through anything else that life threw at her.

Even after her own diagnosis.

Jones, who was working as a pesticide enforcement officer for the Environmental Protection Agency, was living in the Atlanta suburb of Stockbridge, Ga., with her husband, Ernest. During her annual mammogram doctors discovered a lump.

“They said the cells were just starting to spill over, so it was caught at a good time,” Jones said. “When I was diagnosed with breast cancer, I didn’t doubt for a second that I would survive. I recognized that I had cancer, but after your child has had it … it’s just something you can handle.”

Breast cancer runs deep in Jones’ family. Her 91-year-old mother, who has lived in the same Memphis home for 66 years, had breast cancer. She also lost a younger sister to the disease.

But Jones was fortunate in her diagnosis. She didn’t require chemotherapy, but was forced to drive 90 minutes round-trip across Atlanta every day for seven weeks of radiation. Still, she wasn’t phased by the sickness that nearly took her son’s life the year before.

“Sometimes I thought, ‘Did I even recognize that I had it?’ ” she said. “But I knew I would be OK because of Cory and because of my faith.”

Jones, 68, has gone to church nearly every Sunday since she can remember. She joined the United Methodist Church when she and Ernest moved to Boulder City last year. Even after spending her entire life in the South, a region where families trace their roots as far back as the 1600s, Jones said she never felt a stronger connection anywhere else than the one she felt in Boulder City.

Jones said she and Ernest had looked elsewhere to begin the next chapter of their lives, including the small town of Page, Ariz. But it they always came back to Boulder City, she said.

Jones credited the bighorn sheep as being a deciding factor in their decision to come to town, and not long after she and Ernest settled in their home, she saw a sheep trotting its way across the rocks in her backyard.

Jones also is immersed in a melting pot neighborhood. One of her neighbors is Greek, one is from New Zealand, and another is Italian. She said she never saw diversity like that in the South.

“There’s a much more varied population here. And I really like that,” she said.

Ernest Jones, her husband of 50 years, died earlier this year from sepsis with aspiration pneumonia. With her mother in Tennessee and her twin children, Cory and Caycee, in Georgia, Jones makes the best of her alone time in Boulder City. But she isn’t completely alone.

She is part of a group that walks around Veterans’ Memorial Park three days a week. She also can be found in and out of the shops in the historic district, and she stays active with church.

“She’s been received with open arms. She is so pleasant and so positive,” said the Rev. Sandy Johnson of the United Methodist Church of Boulder City. “She has really been loved by our community, and seems to be doing remarkably well.”

Johnson credited Jones with helping the church raise money for its Imagine No Malaria campaign earlier this year. Jones brought in a malaria survivor to speak, and she was influential in gaining more support for the campaign, Johnson said.

“She has been an absolute joy to welcome into this community. We are very blessed to have her here,” Johnson said.

Jones said she has experienced her share of hardships. Whether it was seeing her son suffer during his rigorous fight against melanoma or losing her husband, Jones remains optimistic about her future. In her eyes, it’s the only way to handle life’s challenges.

She said it helped her overcome her own bout with breast cancer, a disease that, according to the Breast Cancer Research Foundation, will claim the lives of about 40,000 women in 2014.

“You’ll start seeing (older) people in the store that look like they’ve been out playing tennis, or you’ll see (older) people with canes who are overweight and are barely moving. You start to recognize that there are differences in people as they age. You have to make the decision as to how you want to do it,” she said.

“She has definitely found home in Boulder City,” Johnson said. “She’s here for the long haul.”