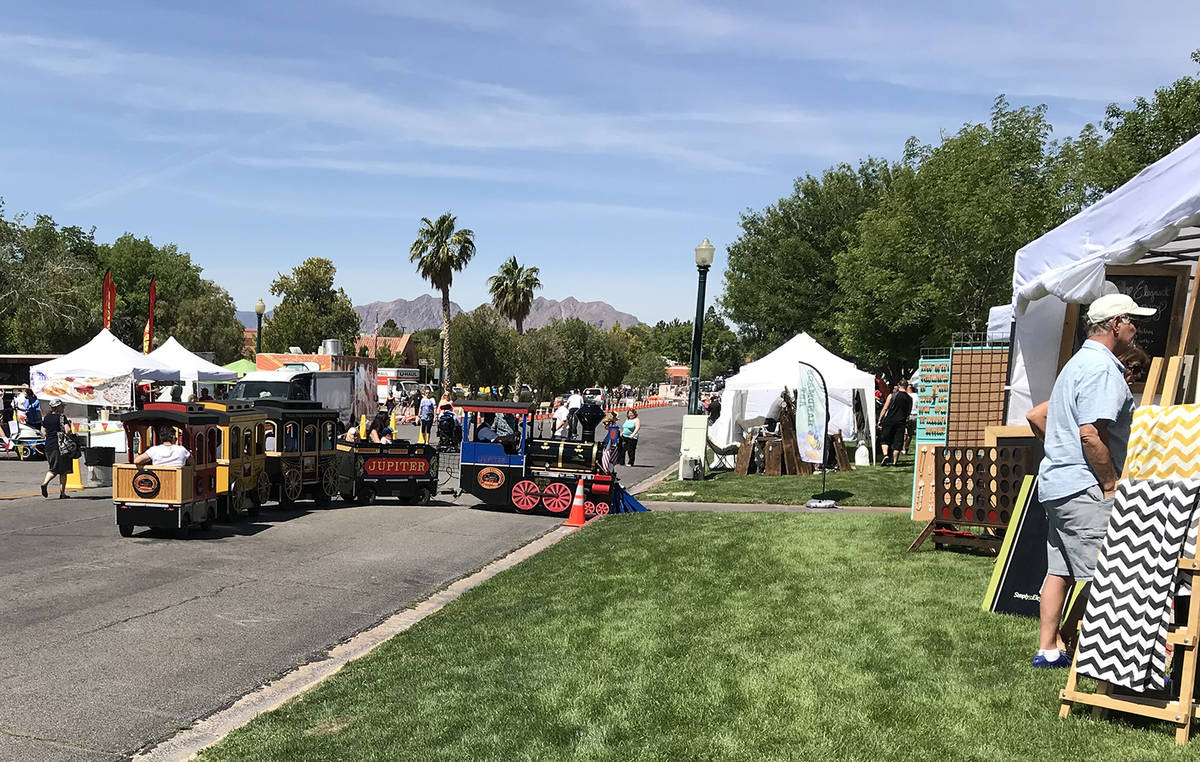 Spring Jamboree, presented by the Boulder City Chamber of Commerce, will be the first large-scale event to resume in Boulder City. It will be held May 1 and 2, and is currently limited to 5,500 people in the downtown parks at one time. 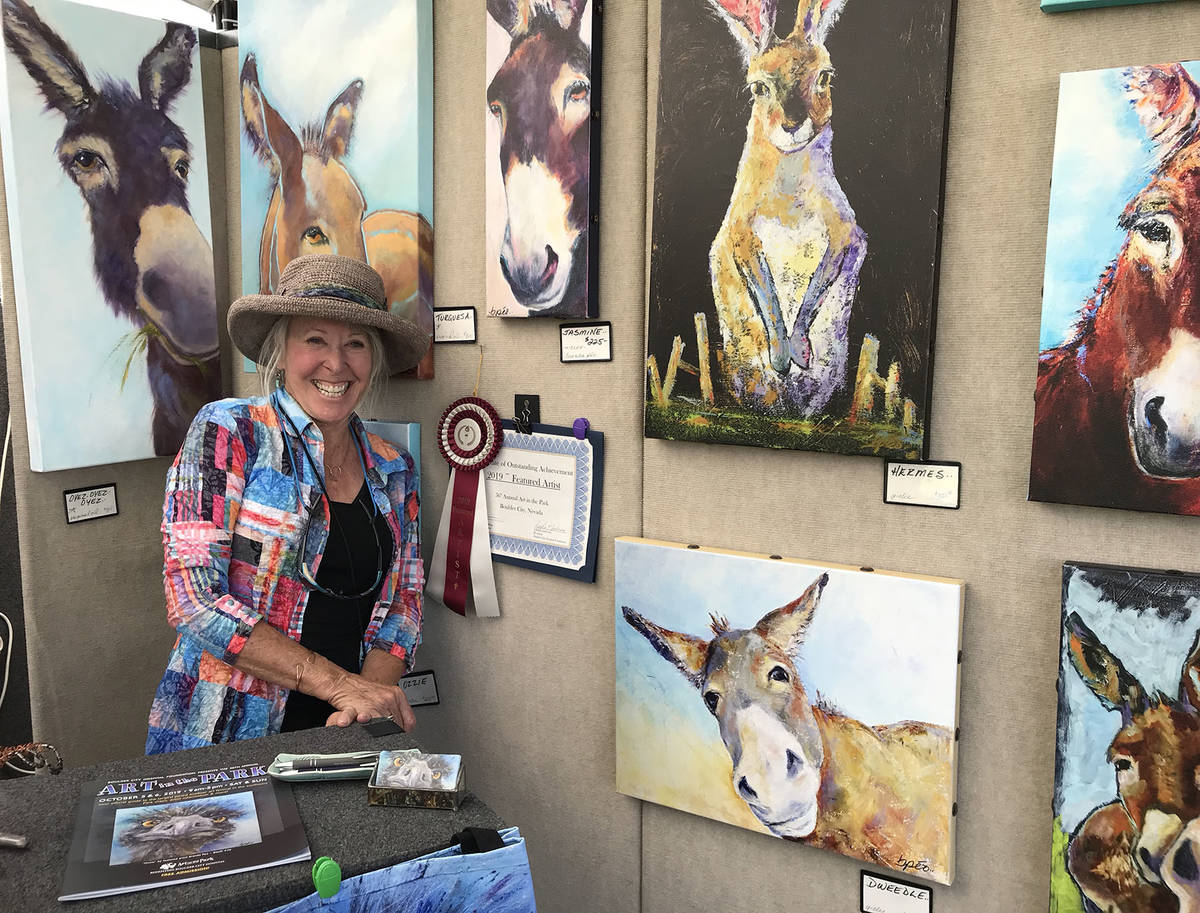 Art in the Park, a juried show presented by the Boulder City Hospital Foundation, is being planned for early October. The event features artists from throughout the Southwest, such as Brenda Peo, who displayed her work in 2019, and attracts about 100,000 people.

Spring Jam, the first large-scale event to be held in town since March 2020, will have many of the same features as in years past, including live entertainment, a car show, a rock and gem show, activities for children and booths featuring arts and crafts. But attendees also can expect to see more space between vendors, roving volunteers to help with COVID compliance and contract tracing, sanitation stations throughout the park, extra cleaning, no picnic benches or high-touch activities and fewer people at the event at one time, said Jill Rowland-Lagan, CEO of the Boulder City Chamber of Commerce, which sponsors Spring Jamboree.

Rowland-Lagan said the chamber has spent countless extra hours planning for the event and how to keep those attending safe, as well as roughly $5,000 extra for sanitation products, attendance counts and COVID-19 screenings.

Even with all their planning, Rowland-Lagan said everything is subject to change as the county takes control of COVID-19 protocols and guidelines.

“It’s day to day based on the plan approved (by the Nevada Department of Business and Industry),” she said, noting that a proposed plan for Clark County contradicts state standards regarding capacity limits.

As of this week, she says they can allow 5,500 people in the downtown parks at a time. Spring Jamboree generally attracts about 20,000 people.

Gov. Steve Sisolak recently announced that all statewide social distancing mandates will be lifted May 1 and local governments will take control. He said his goal is to reopen the entire state to 100 percent capacity by June 1.

“There is a lot of confusion about the phrase ‘local control,’” said Boulder City Communications Manager Lisa LaPlante. “Boulder City does not have local control in the state’s plan. Local control goes to the counties; in this case, it will be held and mandated by Clark County.”

Boulder City is holding off on increasing capacity limits and other limitations until Clark County releases its plans for reopening fully.

Rowland-Lagan said she knows how important it is for Spring Jamboree to be successful.

“All of our artisans and vendors are asking how to maximize their space and make everyone feel comfortable,” she said.

An event such as Spring Jamboree is important to them as they are “mostly mom and pop businesses who have not been able to work for a long time.

“Events have always been important for Boulder City businesses, but they also expand to other businesses,” Rowland-Lagan said.

Aside from helping businesses, it is serving as a model for future events, including the Best Dam Barbecue Challenge that will be held later in the month.

Rosenbaum said the club received approval from the state to hold the challenge Memorial Day weekend, May 28-29, and have it open to the public.

“It’s going to be almost identical to what we’ve had in the past,” Rosenbaum said.

As with Spring Jamboree, there will be a group of volunteers helping with contract tracing. During the event, they will be canvassing the area and asking people to answer several COVID screening questions. Once they pass those questions and share their name and contact information, Rosenbaum said they will be given a wristband.

“Unfortunately, it’s a part of life right now,” he said.

There will also be enhanced cleaning procedures throughout the two-day event.

As in past years, there will be food trucks, a marketplace and a car show, along with the approximately 30 teams vying for the title of state champion and $12,000 in cash and prizes as they compete in the categories of ribs, pork, brisket, chicken and total overall score.

Memorial Day weekend also will see the return of a ceremony to honor those who gave their lives while serving our nation in the military.

The Nevada Department of Veterans Services is planning for an event of some type at the Southern Nevada Veterans Memorial Cemetery on Memorial Day, as well as a flag-in event on May 29. The details of the ceremony are still being worked out as social distancing protocols remain uncertain at the moment.

“What we can relay is that we are working with our volunteer group that puts together the annual Memorial Day events each year and that we will honor our fallen, while making sure to keep everyone safe,” said Terri Hendry, communications director for the department.

In October, Boulder City Hospital Foundation will welcome the return of Art in the Park, which traditionally attracts about 100,000 people over two days and is one of the major fundraisers for the nonprofit medical facility.

“Now in its 57th year, Art in the Park has been a community anchor for nearly six decades and generations of residents and visitors make the drive to embrace one of the largest juried art festivals in the Southwest,” said Victoria George, director of marketing and community engagement for the hospital.

Additionally, the foundation will bring back its Heart of the Community Gala this year, although it will be held Dec. 11 rather than in May.

To raise funds while following stricter COVID protocols, the hospital foundation started its Night Under the Stars, an outdoor drive-in movie experience, that is co-hosted by Guardian Elite EMS.

On May 15, “The Greatest Showman” will be screened and “Grease” will be presented June 19. Admission is $25 per vehicle.