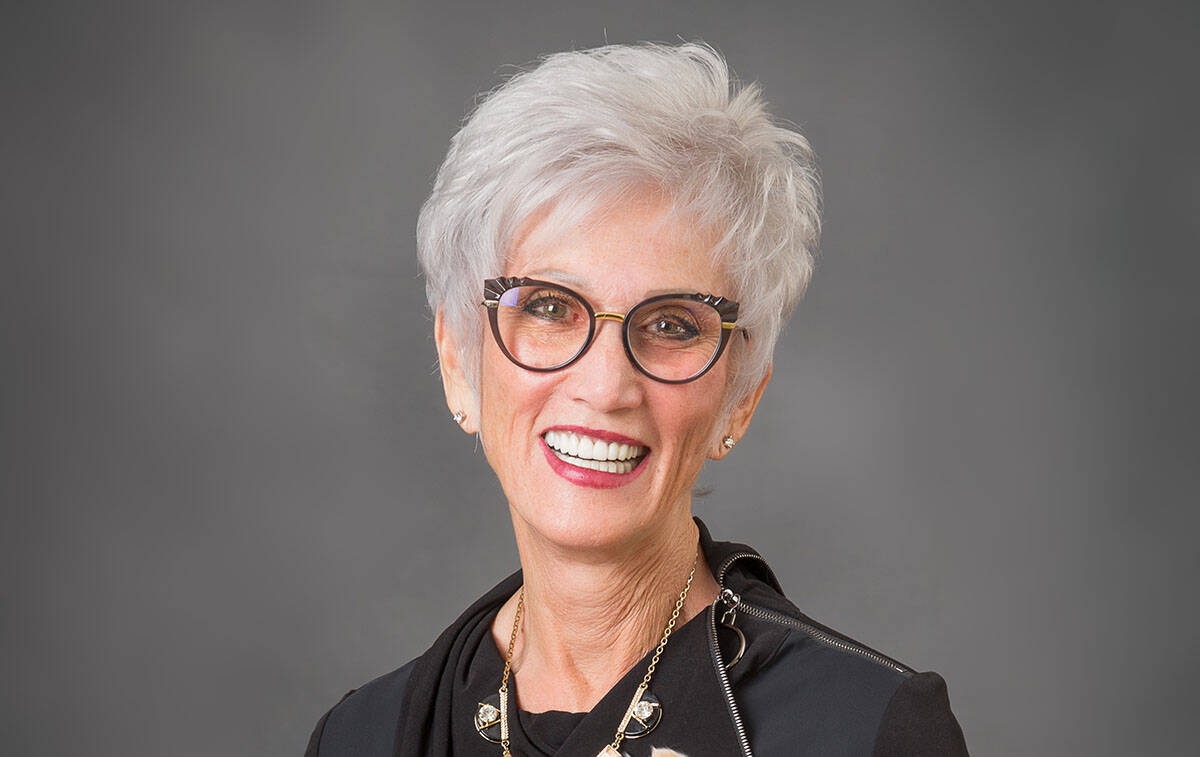 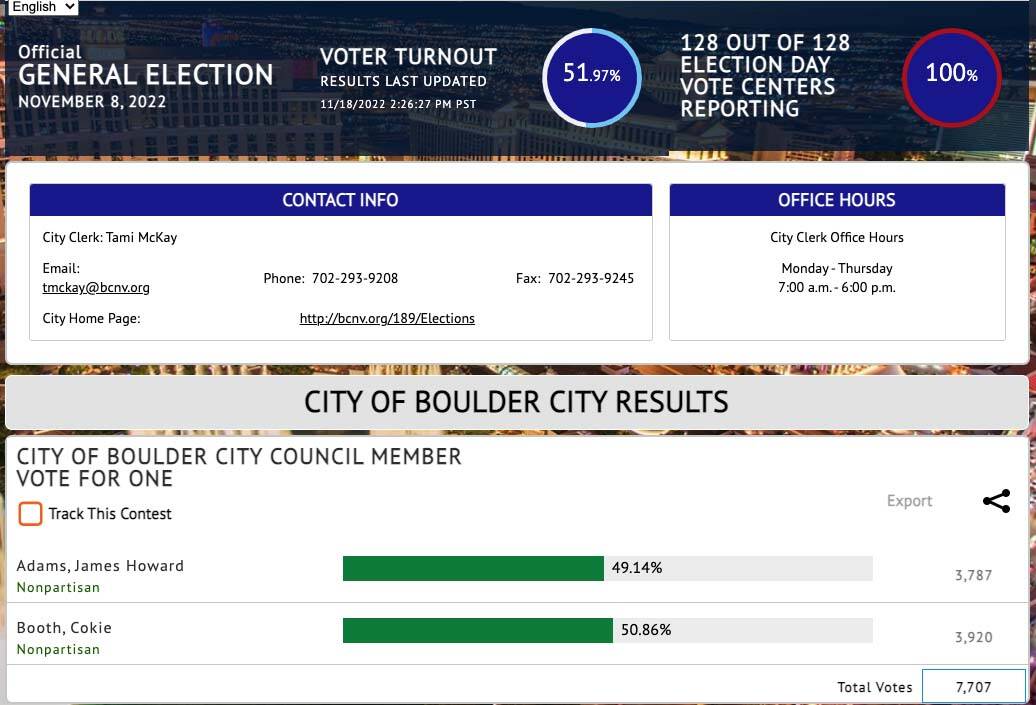 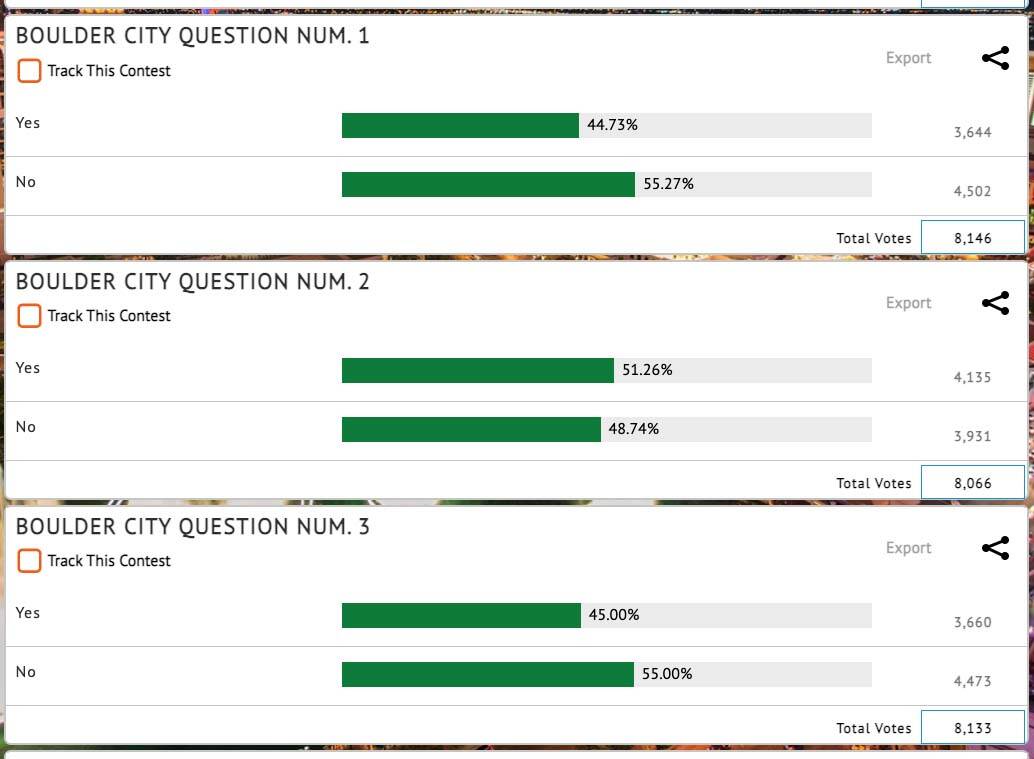 Also canvassed were the final tallies on the three municipal ballot questions, with voters approving to allow expanded clean energy technologies in the Eldorado Valley and against selling land for a grocery store or new public safety facilities.

Booth received 3,920 votes to James Howard Adams’ 3,787 votes. She, along with Mayor-elect Joe Hardy and Councilman-elect Steve Walton, will be sworn into office at a special City Council meeting at 7 p.m. Nov. 29.

“I love Boulder City and I truly appreciate everyone that helped me become the next city councilwoman,” Booth said.

“For those that didn’t vote for me, I want you to know we do have something in common and that is our love of Boulder City,” she said. “I am here to serve everyone.”

Adams, who served one term on the council, said he plans to continue serving the community.

“Looking forward, I plan to renew my focus on community support through the arts and music,” he said. “I also hope to continue serving our local Boulder City community in any way that I can, whether formally or informally, and wish nothing but success for the incoming council.”

Question 2 passed by 204 votes and will allow for the expansion of clean energy technologies.

“The expanded clean energy uses aligns with current uses in the area, aligns with the current zoning, is safe and has no negative impact. It should also be noted that even with the passage of this question, new natural gas generation facilities are not permitted; just existing facilities are permitted,” Tedder said.

Questions 1 and 3 did not pass with 55 percent of Boulder City residents voting no.

Question 1 pertained to selling approximately 16.3 acres of city owned land to develop a grocery store and Tedder said “staff and council have heard from many residents over the past five years who say they would be in favor of having another grocery store in the city.

“The city does not have the ability to construct buildings for lease to private enterprise like a private developer. Approval of the question would have made it easier to find a developer interested in building a store in Boulder City,” he said.

Question 3 pertained to spending as much as $7 million from the capital improvement fund to better public safety facilities including construction of a new police station and a training facility at the existing fire station.

“The police department on Arizona Street, originally built in 1932, is outdated for modern policing needs. It does not comply with state and federal standards, such as the Americans with Disabilities Act,” Tedder said. “City staff will identify other ways to fund a new facility or rehabilitate existing facilities without impacting the current level of service residents expect.”

“As for the fire training facility, housing such a facility in our city limits would have allowed training sessions to have been conducted on the job. We are committed to making sure our firefighters receive a high level of training as needed, even though they will need to travel to North Las Vegas and Henderson, creating scheduling concerns and increasing overtime pay in the city’s budget,” Tedder said.

Boulder City resident Craig Ullery relayed his opposition to certifying the election results due to his experience observing the polls at the Boulder City Recreation Center on Nov. 4 and 8 in a message he wrote for public comment.

“On Nov. 4, the observation area was 40 feet away from the intake tables and more than 50 from the voting booths rendering observation not meaningful,” Ullery wrote.

Ullery stated he filed a complaint with the secretary of state’s office because what he observed Nov. 4 violated the state’s code of “meaningful observation.”

He added that when he returned to the polling place Nov. 8, the observation area had been moved to about 30 feet from the intake tables and 35 feet from the voting booths.

“Other voting sites at Martha P. King Elementary, Albertsons on Horizon and the Galleria Mall in Henderson had observation areas within 10 to 12 feet of either the intake tables, voting booths or both.”

Washoe County spokesperson Bethany Drysdale has publicly stated the county’s security administrator reviewed the building’s security cameras and confirmed that no one entered the ballot room or registrar’s office during the time that the livestream was down.

Mayor Kiernan McManus closed the meeting by commenting about “elections in general.”

“Out of the 17 counties in Nevada, 10 of them have had either their registrar or voter or city or county clerks who administer the elections resign. That’s decades of experience we’ve lost in administering our elections, ” he said.

“I’ve been voted out, I accept that. I have no question about that,” McManus said. “People oughta get a clue about how these elections actually work.”