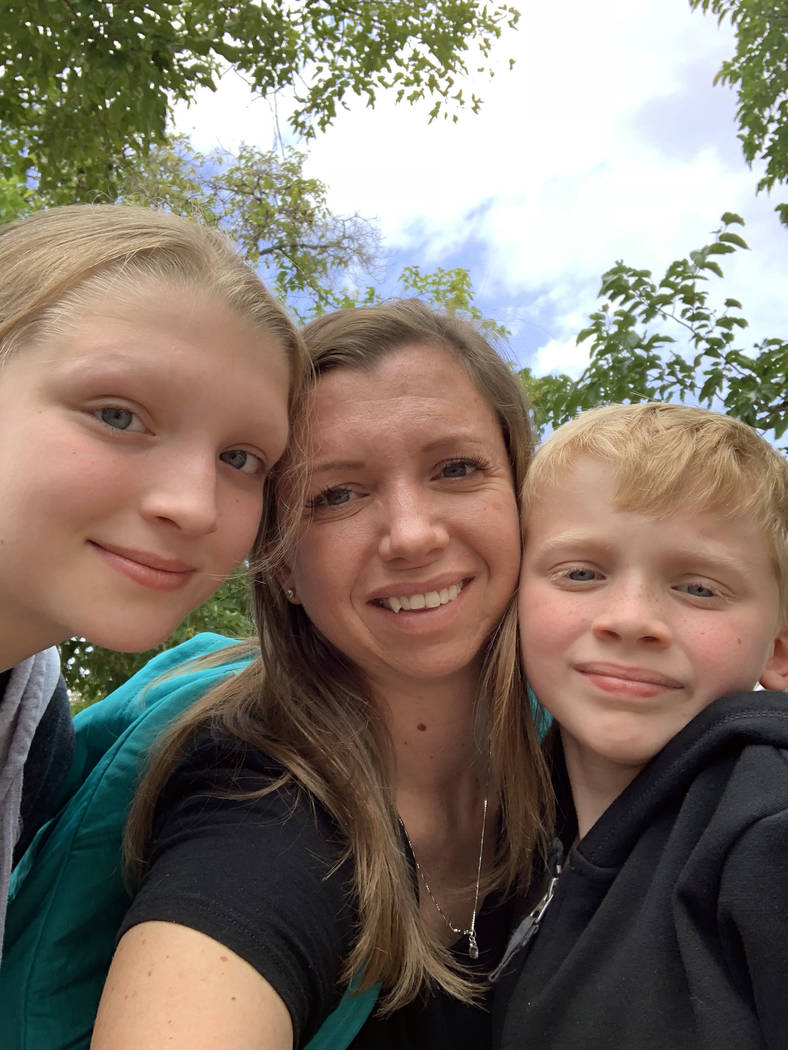 Katie Minucci When Katie Minucci, center, went through Boulder City's Breaking the Cycle Rehabilitation Court she said she was given her life back, including shared custody of her children, Hannah and Jacob.

Boulder City’s drug court helps people get their lives back as one local resident can attest.

“When I came into the program, my life was in absolute chaos,” said Katie Minucci. “They helped me rebuild my life.”

When she started the program at the end of 2015, Minucci had been charged with her second domestic battery offense. Her drug of choice was methamphetamine, but she said she also struggled with marijuana, alcohol and pills like Oxycontin and Xanax. She was homeless and her husband had divorced her. She had lost custody of her two children and there was a restraining order against her.

“For me, it was an opportunity of a lifetime to better myself. … It takes you out of your element and reintroduces you to your life,” she said.

The Breaking the Cycle Rehabilitation Court, formerly called Breaking the Cycle Drug Court, started in Boulder City at the end of 2014. It offers people who are in trouble with the law and suffer from substance abuse a way to rebuild their lives instead of going to prison. To date, 12 people have completed it with another three scheduled for commencement in February.

“We have a small sample size but ours would be 91 percent I believe,” he said. “The advantage of our smaller, more personal approach is that when we have one of our graduates get rearrested we were able to help with more appropriate counseling so to help avoid future problems … which seems to have worked.”

Miller said the national rate of participants reoffending is 75 percent.

One of the first things Minucci had to do was be put on house arrest, meaning she had to be at home unless she was going to court, work, counseling or an outing approved by the court. She was on it for 78 days.

“First thing we have to do is get them clean,” Miller said.

He said all the participants come in on house arrest and have some type of GPS monitoring and alcohol detection device. They also have random drug tests at least twice a week and individual and group counseling. All have the same requirements to complete the program, but the time to finish varies depending on participants’ needs and circumstances.

They also have to get a job.

Minucci finished the program in February 2017 and has been clean for three years, three months and counting. She works hard every day to maintain it.

“I attend several recovery-based meetings a week and I have a tight-knit support group of women who are also in recovery that I communicate with daily,” she said. “We are so close and they have become like family to me and are my social circle. I help others seeking recovery, too. The opportunity to give back is one of the best things about recovery.”

She also now shares custody of her children with her ex-husband and has a full-time job at Auto Specialists.

“Once you start doing the right thing, they’re supportive,” she said about her family. “They will do anything to help.”

Help one at a time

“The goal is to make Boulder City a better place one person at a time,” Miller said.

“… it puts a stop to revolving-door justice where those with substance abuse issues get arrested, go to jail to just get out and get rearrested,” he said.

Miller was able to start the program after the court received a $50,000 grant from the Boulder City Sunrise Rotary Club.

“I could see for a long time that there was a real need for it in Boulder City,” he said.

Unfortunately, the city did not have the resources.

Rotarian Doug Scheppmann said the club had been given some money from a benefactor and the members wanted to do something with it that could change lives. They brainstormed and decided to go to Miller to see if he had a program that could use the money.

“Once we had that money, we were able to put together a team,” Miller said.

“Now we have a constant funding source, so we can keep going,” he said.

Additionally, Scheppmann said the Rotary club still gives money and is working on a new educational program for it. The city also allocated $25,000 for it in its 2018-2019 fiscal year budget.

Miller said the program’s small size and personal approach allows them to help with appropriate counseling for successful and long-lasting results.

She said she had tried another program in Henderson, but it was faceless. She would just show up for drug tests.

“They know we care about them and are truly pulling for them,” Miller said.

Unlike other programs, Boulder City’s is open to anyone.

“You have to be high risk and high needs,” Miller said.

High risk means someone has had multiple contacts with the court system because of substance abuse and is unable to address them. High needs means substance abuse has cost them their family and job.

“Ultimately they can lose their lives,” Miller said. “That’s how risky their behavior is.”