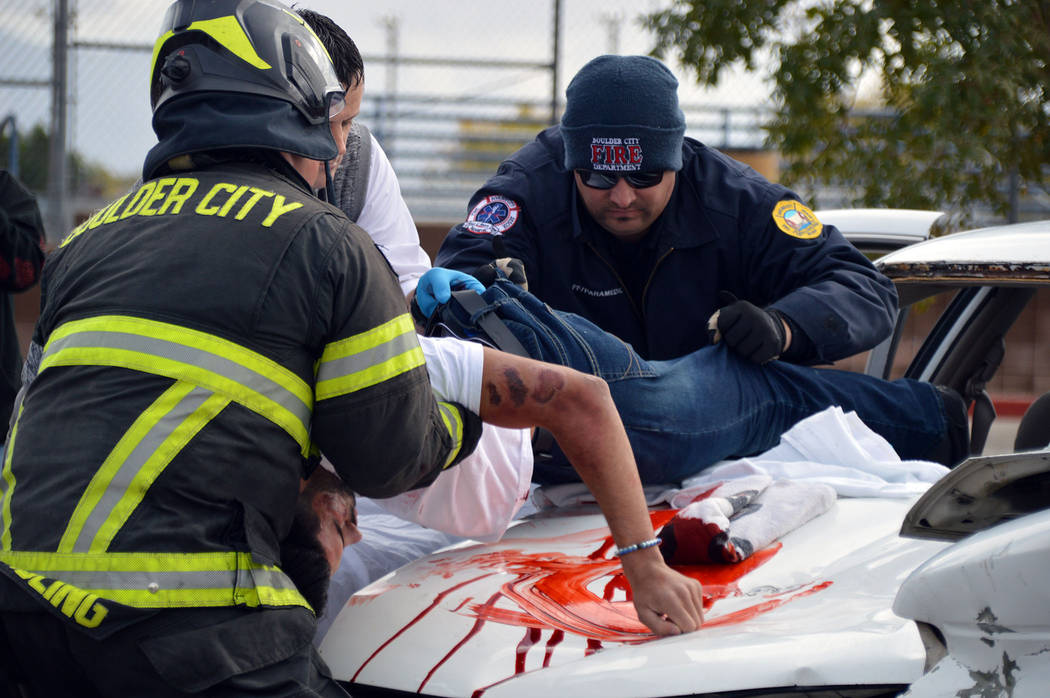 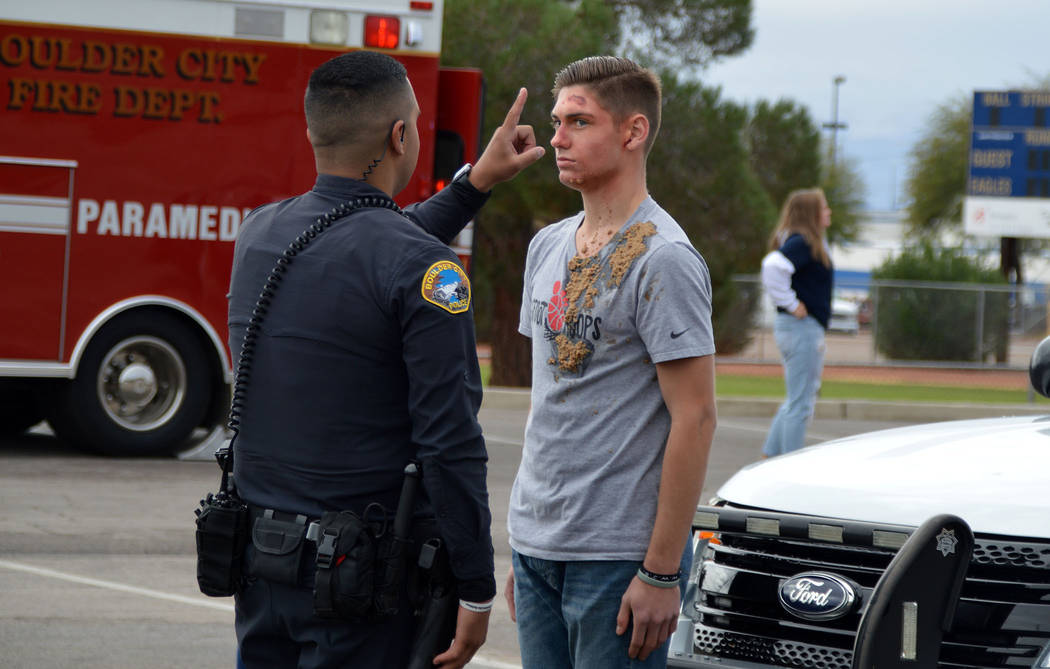 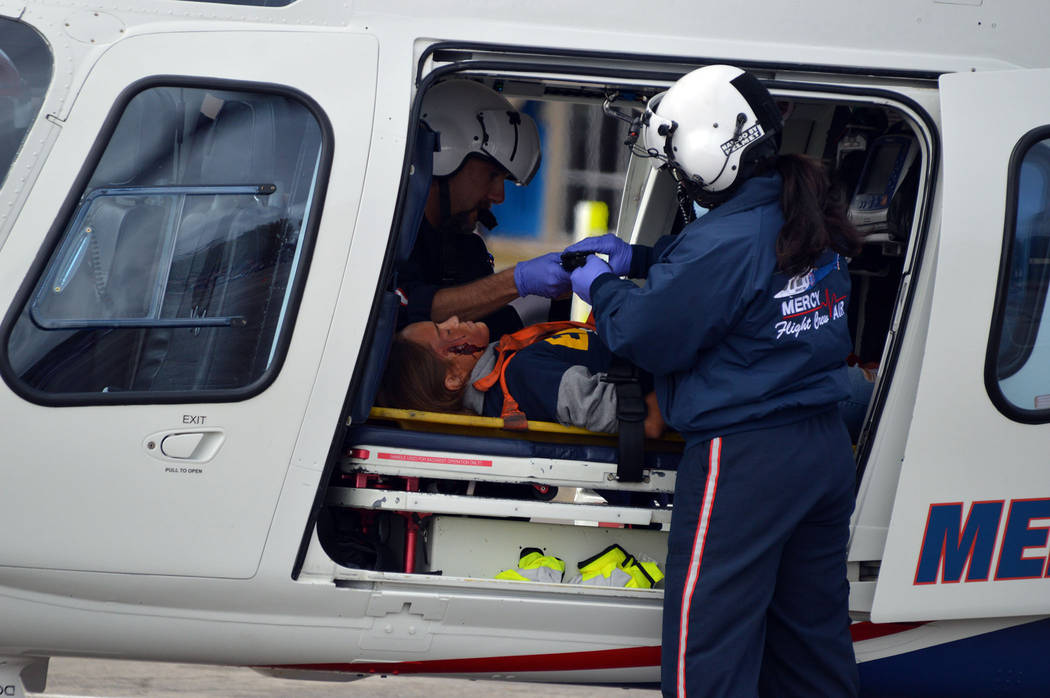 Celia Shortt Goodyear/Boulder City Review Boulder City High School senior Keely Alexander is strapped in to be lifeflighted by Mercy Air to a trauma center during the Every 15 Minutes presentation at the high school Thursday, Nov. 21. 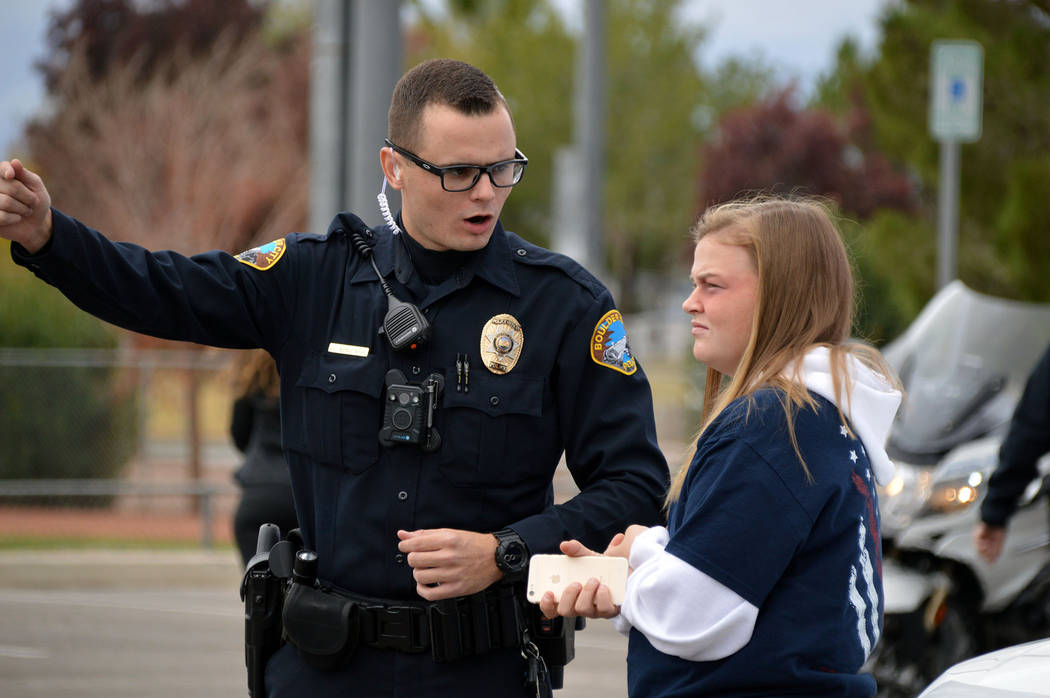 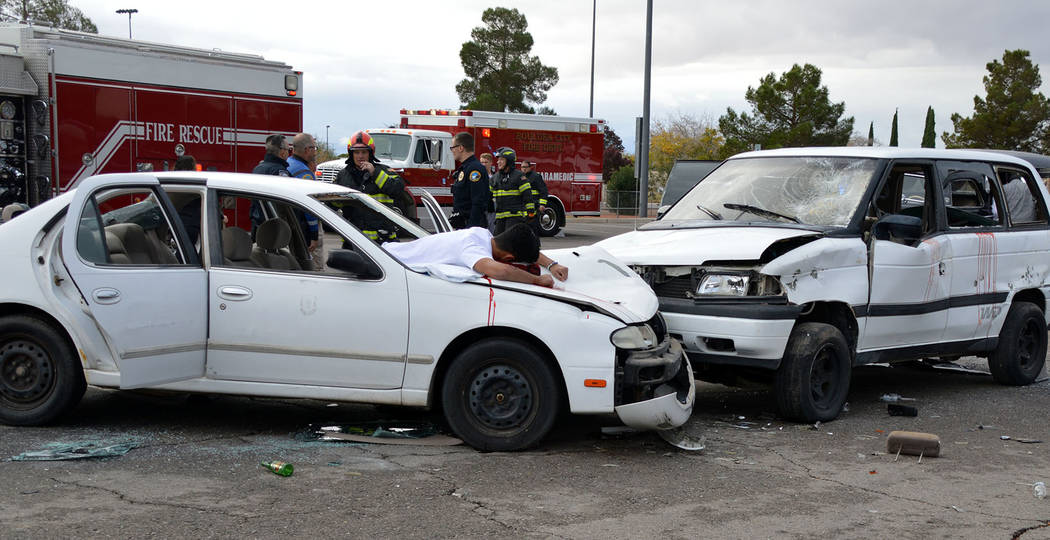 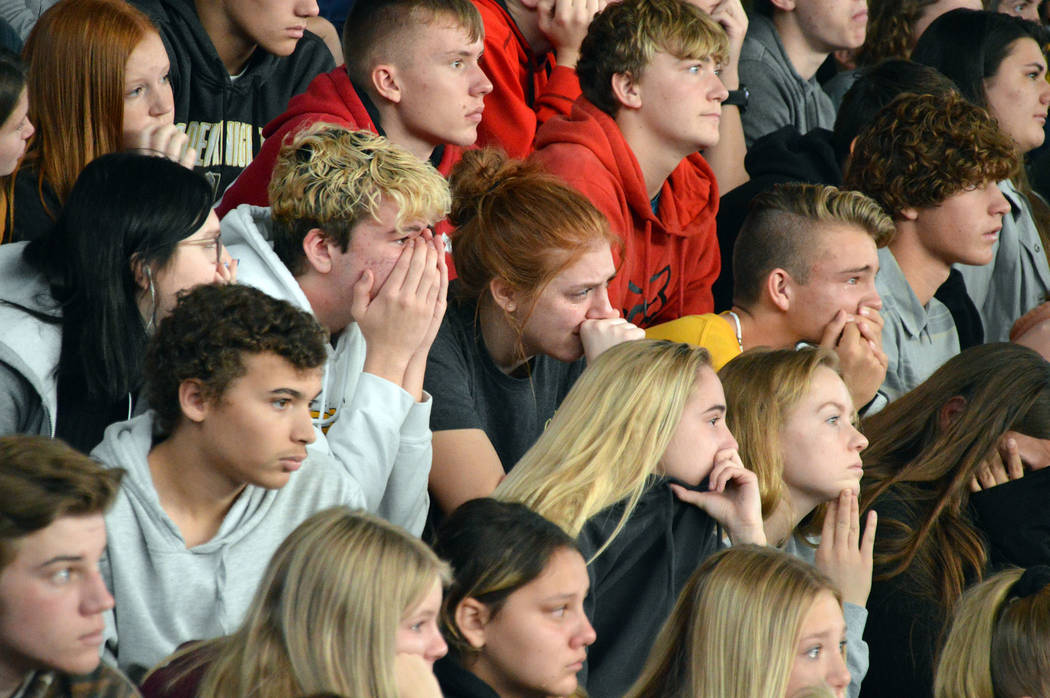 For at least eight high school students, last week was sobering and life-changing.

“I now know anything can happen at any time of the day,” said Trey Davis, a junior at Boulder City High School.

Davis was one of the eight from the school chosen to be part of a re-enacted car crash, a key element of Every 15 Minutes, a program for high schoolers that challenges them to think about safe driving, drinking, personal safety and the responsibility of making mature decisions. Its staged crash includes a real response from police and fire department personnel and a medical helicopter.

Davis was “dead on arrival” at the crash Nov. 21 in the school parking lot. During the re-enactment, he was placed on a gurney, put into a body bag and then driven away in a hearse.

Senior Keely Alexander was another student who “died.” She was airlifted from the accident to the trauma center. She described the experience as surreal.

“When I had to go in the helicopter and meet my parents (at the hospital) and then hearing the doctor pronounce me dead was terrible,” she said.

Barnes was “injured” in the accident and then transported by ambulance.

“I never realized it can happen even if you’re not drunk because someone drunk runs into you,” she said.

“You can be doing everything in your power and someone else can do something wrong and take everything away from you,” said Andrew Troupp, a senior.

Senior Sydney Krumm made the 911 call after the accident, and her sister Rachel Krumm was injured in it.

“I didn’t cry until I saw her get into the ambulance,” Sydney Krumm said.

“It’s kind of been putting things into perspective,” said Rachel Krumm, a junior. “It can happen to everybody.”

Senior Devon Walker said the experience showed him what could happen and changed his mindset about going to parties.

“It brought to my attention that one small mistake can really lead to something detrimental,” added Gavin Balistere, a senior. He was the “driver” who caused the accident and said because of the experience, he will not drive distracted.

The kids involved in the crash did not return to the school until the next day, Nov. 22, for an assembly, which showed a video of the collision, as well as its aftermath — the arrest, charging and sentencing of the driver, the death of their friend who was airlifted, and the parents being told their children had been in a car crash. The students and parents also wrote letters to each other.

Boulder City Police officer Dave Krumm, who has been the school resource officer for 10 years, said this was the fifth Every 15 Minutes program he has seen at the school, but the first one that his daughters have been involved in.

“Every year, I get emotional because I’ve been here so long and know the kids as mine,” he said. “It was hard to write that letter (to his daughters) and even harder to read the one they wrote to us.”

During the program Keely Alexander read her letter to her parents, and her mom, Enez Alexander, read the one she wrote to her.

“Never would I have thought my last day on Earth would be Nov. 21 … . I wish I could have helped more because you guys invested so much in what I do,” she said.

“Dad and I can remember the day you were born … . We tried to give everything in our hearts to protect our girls. Thank you for giving us, strength, resilience, commitment and girl power,” Enez Alexander said.

Principal Amy Wagner said she knew the accident wasn’t real but still experienced the emotions that come with it. She encouraged everyone to stop and think before making choices, especially before getting behind the wheel of a car.

“I watched them take all these kids out of the cars,” she said. “They put Trey in a bag. … They came to me yesterday and said I had two staff members who lost kids. I knew it wasn’t real, but the emotion was there. You make choices every single day. Stop and think.”