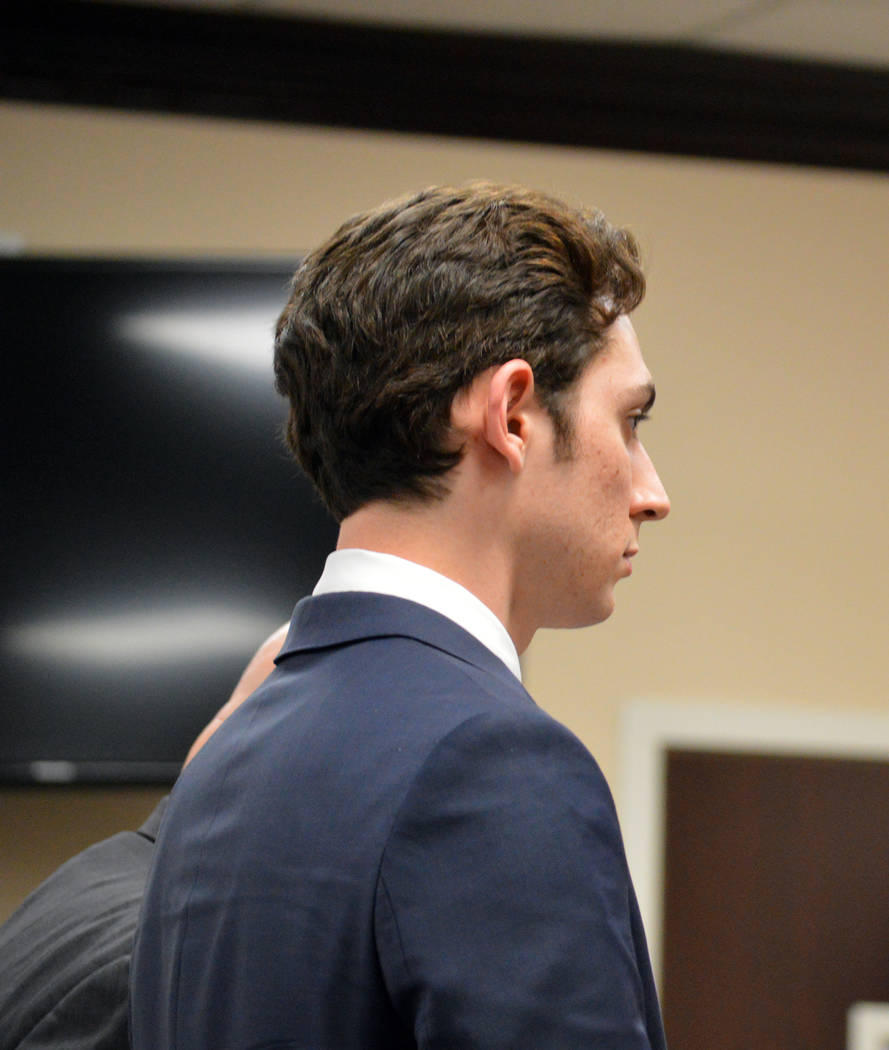 Celia Shortt Goodyear/Boulder City Review Devon Yslas listens to Boulder City Justice of the Peace Victor Miller during a status check Tuesday. Yslas is awaiting sentencing for one of his two charges of animal cruelty

The Boulder City Justice of the Peace is waiting to issue a sentence for an animal cruelty charge because of its seriousness and for the safety of all the parties involved.

In February, Devon Yslas pleaded no contest to two counts of cruelty to animals, one count of wanton waste of game (amended from hunting out of season), one count of unlawful manner of hunting with aid of artificial light, and hunting without a license or permit after he was arrested Sept. 7 on charges of unlawful camping and making a false statement to/obstructing a public officer.

During that arrest, officers spotted evidence in plain sight that connected him to the mutilation and death of several rabbits the day before in Bootleg Canyon Park.

At Tuesday’s, June 12, status check hearing, Judge Victor Miller said the serious nature of Yslas’ comments about having issues feeling emotions and that killing the rabbits gave him a way to feel emotions, the way the bunnies were placed with red gift bows near them, and how Yslas saved their ears after cutting them off made the actions seem “ritualistic.”

Miller said he wanted to know if Yslas had a psychological problem before sentencing him on one of the animal cruelty charges to ensure the safety of the community and all parties involved with the case, which is why he previously ordered a neurological and psychological evaluation.

“I didn’t want him to go to jail and be the same person after,” he said. “It wouldn’t be safe for the community. … I wanted those to be addressed before sentencing, and they are not.”

Yslas and his attorney, Erick Ferran, did provide a report from Dr. Lewis Etcoff, a licensed psychologist in Nevada, to the court Tuesday, but Miller said that it “caused him some concern” because it seemed incomplete.

“It addresses the neuro part of the report. … (But) I don’t think he was aware of the things in the statement of arrest,” he said.

Ferran said the testing was done late during the week before the hearing and that he did not have any contact with the doctor.

“I wanted the report to be what it was,” he said.

Prosecutor Amy Ferreria, chief deputy district attorney for Clark County, said she had the same concerns as the court.

“I’m concerned because it seemed like that’s all the doctor knows,” she said. “I don’t know if other things were said at the evaluation.”

Miller said they had two options in moving forward: the state could do its own evaluation or Etcoff could do one with all the facts of the case.

“It’s OK for him to do it if the doctor has all the facts and documents of the case,” Ferreria said.

Ferran agreed and said he would provide a packet with all that information to Etcoff.

According to his website, Etcoff has a clinical neuropsychology practice as well as provides forensic services.

The next court hearing is scheduled for 1 p.m. Tuesday, July 10.

For all of the charges brought against Yslas, except the first one of animal cruelty, Miller previously handed out four sentences that would run consecutively, according to court documents.

He is on house arrest and wears a monitoring system.