Max Lancaster/Boulder City Review The Boulder City Mobile Home Park at 1501 Nevada Highway was purchased out of bankruptcy court in Novembe2015 by developer Randy Schams. With his daughter Jackie Schams, who has been managing the property, it will be turned into a neighborhood of townhomes. 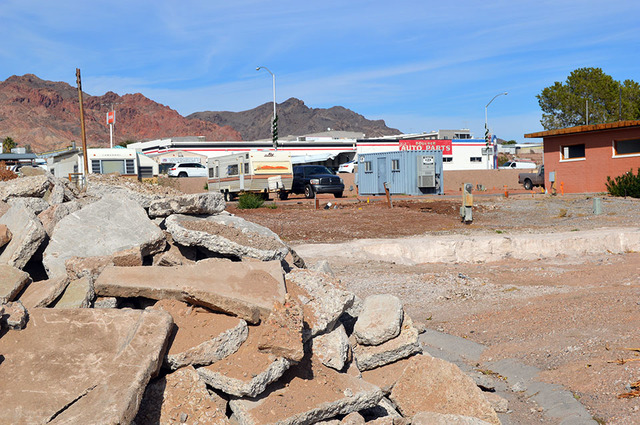 Max Lancaster/Boulder City Review The Boulder City Mobile Home Park at 1501 Nevada Highway was purchased out of bankruptcy court in November 2015 by developer Randy Schams. With help from his daughter Jackie Schams, who has been managing the property, it will be turned into a neighborhood of townhomes.

The Boulder City Planning Commission approved a variance to adjust setbacks to build townhomes on the site of the Boulder City Mobile Home Park on Nevada Highway despite public outcry during its meeting Wednesday night.

Commissioners voted 5-2 to approve the variance for the future 65-unit townhome development at the park developer Randy Schams purchased in November 2015 in a court-ordered bankruptcy auction.

The company also requested a reduction in the number of parking spots for recreational vehicles and boats from the required 13 to nine.

Boulder City Planner Susan Danielewicz recommended that the Planning Commission approve the variance because similar variances had been granted in the past and that the city zoning code did not adequately address the needs of townhomes.

“The zoning code is decades old and it was designed for apartments and condominiums,” Danielewicz said. “The code was imagining a project where people own a fraction of the property in the building but they don’t own the land under the property. A townhome and the land it is on will be owned by owner of the lot. We have 65 townhomes so we have 65 separate lots.”

Danielewicz was referring to the fact that if Schams were to build apartments or condominiums on the property, then a variance would not be needed since the code was intended for that use; however since each townhome is an individual piece of property a variance would be needed for each unit.

She went on to say that the property deserves a variance because it’s not the developer’s fault that city code did not adequately account for townhomes.

However, Danielewicz’s opinion did not mesh with residents at the meeting who overwhelmingly opposed granting any form of variance on the property.

Resident Neil Siniakin said that Schams’ property did not meet the criteria for a approving a variance, stating that the parcel did not have exceptional circumstances that the builder could not overcome, and that granting the variance was setting a precedent.

“A variance is not used to change code. If there was a problem, the code should have been changed a long time ago,” Siniakin said. “This variance does not meet the criteria. It does not have something unique about the land that the builder can not work around… and you are setting a precedent by using a variance to justify a variance.”

Danielewicz countered Siniakin’s argument by stating that uniqueness is not just defined by physical issues with the land.

“Unique does not just define land issues,” Danielewicz said. “A townhome is something that the city code did not account for and the property owner should not have to create a different product just because of dimensions or setbacks.”

She went on to say that granting a variance did not create a precedent because there have only been two similar variances granted in 20 years.

“You don’t grant a variance because of past precedent, but you also don’t ignore similar variances,” Danielewicz said. “Two townhome projects in 20 years does not make a code amendment.”

Resident Kiernan McManus said that approving this variance would set a bad precedent citing that Schams had received the same variance for his other townhome project on Cottonwood Cove.

“This developer has asked for this same variance before and you are setting the stage for you did this for me last time, so now you have to do it again,” McManus said. “Mr. Schams has a right to maximize his profits but not at the expense of the zoning code.”

Co-owner of BCMHP LLC, Jackie Schams, who spoke in public comment in defense of the project, said that she and her father were not trying to maximize their profit because they are not planning to build apartments or design as many townhomes as previously stated or allotted for the parcel, which is zoned R3 for multifamily residences.

“I am hearing a lot of talk about maximizing my dollar and creating a dense project, but in reality we could have put many more homes in the project,” Jackie Schams said. “If I really wanted to maximize my density, I would have created apartments, but instead we wanted to build nice affordable housing.”

According to city records, the townhome project as it is currently designed is only at 30 percent of its maximum density and the original plan would have had 76 units instead of 65.

Commission member Fritz McDonald, who, along with Paul Matuska voted no on the variance, said that he felt uncomfortable voting for something that was not backed by city code.

“I feel like we are doing this by the seat of our pants and I have a big problem not waiting to create a new city code,” McDonald said. “If the developer wants to make condominiums on his property, then that is his right, But if he wants to see this project, we should do it on our terms.”

“I don’t think this is flying by the seat of our pants. I think it is activity,” Leavitt said. “We can all agree that we wish the code were up to date but it is not and I don’t want to keep someone from using their property in an effective way.”

Member Cokie Booth said that the homes were an affordable upgrade to the community.

“Homes under $200,000 are affordable for single families and it is a nice layout,” Booth said.

Jackie Schams said that she hopes to keep townhome pricing under $200,000; however, she did not make any guarantees.

The Planning Commission’s yes vote caused members of the public to make claims of collusion.

“I am astounded that you think this is a property unique to our town,” resident Tracy Folda said. “Jim (Giannosa) and Cokie should have never been able to vote tonight because of their relationship with RPS homes.”

RPS Homes is a company owned by Randy Schams. Planning Commission Chairman Jim Giannosa had worked for Schams’ company as a project manager, but stepped down from the position Nov. 4.

Booth, who owns BC Real Estate, said that she has never directly worked with Schams, but had shown properties of his to clients.

She said that showing Schams’ property to her clients is not a conflict of interest because she makes the majority of her income from her clients who pick the houses they want.

“If my client wants to see a house by Mr. Schams, I will show them the house as I would do for anyone,” Booth said. “I do not work for Mr. Schams and I do not make my income from Mr. Schams. My clients are my income and they pick the house.”

Booth went on to say that she had previously showed clients houses in Our Place at Cottonwood, but had never sold one.

Giannosa closed the meeting on a fiery note after resident Ernie Koontz demanded that the chairman step down from his position for government abuse that benefited himself and RPS Homes.

“I have said I am available anytime to talk and not one person has taken me up on that offer,” Giannosa said. “Mr. Koontz you want to see my income? Come on over I will show it to you. I will even tell you why I left Mr. Schams, but before you cast dispersion about my character you should have the facts. You did not have the facts tonight Mr. Koontz. Meeting adjourned!”