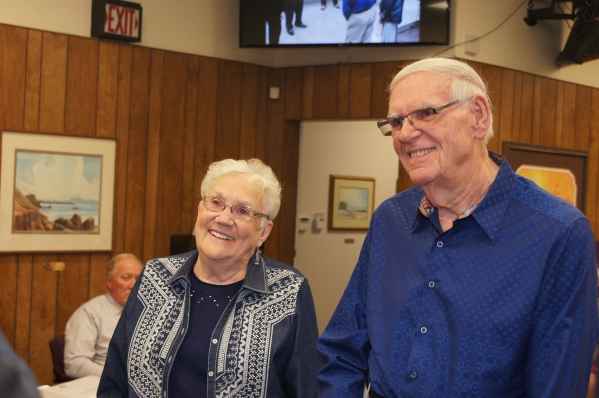 Darlene Burk had a vision when she and her husband, Vern Burk, founded the Boulder City Public Art Scape nine years ago.

Largely inspired by the art exhibits in Grand Junction, Colo., the Burks decided it was time to bring some of that art to Boulder City, the place they’ve called home since 1963.

Under their leadership, along with a board of directors, Art Scape has purchased or donated 32 sculptures worth more than $250,000 to Boulder City.

The sculptures, designed by artists from across the country, have helped make downtown Boulder City more attractive to the tourists making their way to and from the Hoover Dam. But after a decade of seeing their vision come to life, the Burks will relinquish their Art Scape duties in June.

Darlene cited age and health concerns as the reasons for stepping down.

“We’ve had nine years of enjoyment,” she said. “I’ll miss seeing the excitement when new things come in. There have been a multitude of little things that have worked together.”

Art Scape, a 501(c)3 nonprofit organization, purchased its first statue in 2007. “The Kiss,” as it is called, is a 2-foot-tall green and bronze statue of a frog blowing a kiss. It’s located on the corner of Arizona Street and Hotel Plaza.

Darlene said it’s one of Art Scape’s more popular statues, and she enjoys seeing visitors take pictures with it, along with the others as they make their way through Boulder City’s historic district.

“I see little kids riding the pig and kissing the frog on the corner. It’s been very rewarding,” she said.

Vern would drive to rock quarrys around Las Vegas to find the base that would eventually hold each sculpture. The rock would then be sawed and delivered the day a new statue would be placed in Boulder City.

He said his favorite statue is the one named, “If It Isn’t One Thing, It’s Your Mother,” an aggressive-looking sculpture of an explorer with a coon-skin cap trying to fend off a bear.

Darlene said Vern never got the credit she thought he deserved for assisting with Art Scape, even though he was an integral part of its success.

“Without Vern, I couldn’t have done it,” she said. “Vern is a very generous person, and he would work along with whatever we needed. He was just always there to back me.”

Although the Burks made their vision of an Art Scape in Boulder City a reality, they won’t have any involvement once they hand the reins over next year. Keeping the nonprofit status is Darlene’s most important requirement for whoever takes her place, and she’s confident that whoever replaces her will do just fine.

“My philosophy is, ‘When you turn over something to someone else, you need to give them the opportunity to exercise their thoughts,’ ” she said.

Harold Begley, who serves on the board, credited the Burks with being the driving force behind Art Scape to make it so successful.

“A lot of us helped all along the way, but Vern and Darlene have done so much for the city,” he said. “They originated it and they just poured their heart and soul into it. I think the city has benefited tremendously.”

Art Scape will buy at least one more statue before the Burks retire. Darlene’s hope is to get one that thoroughly depicts Boulder City. It will be placed in front of the Chamber of Commerce building.

“Darlene had a vision with art, and it was just a very pleasurable time for us. We’re happy that other people enjoy it as well,” Vern said. “We love Boulder City. And if you love something, whether it’s a city, a spouse, a child, or a car, you devote thought, energy, time and your resources into it.”