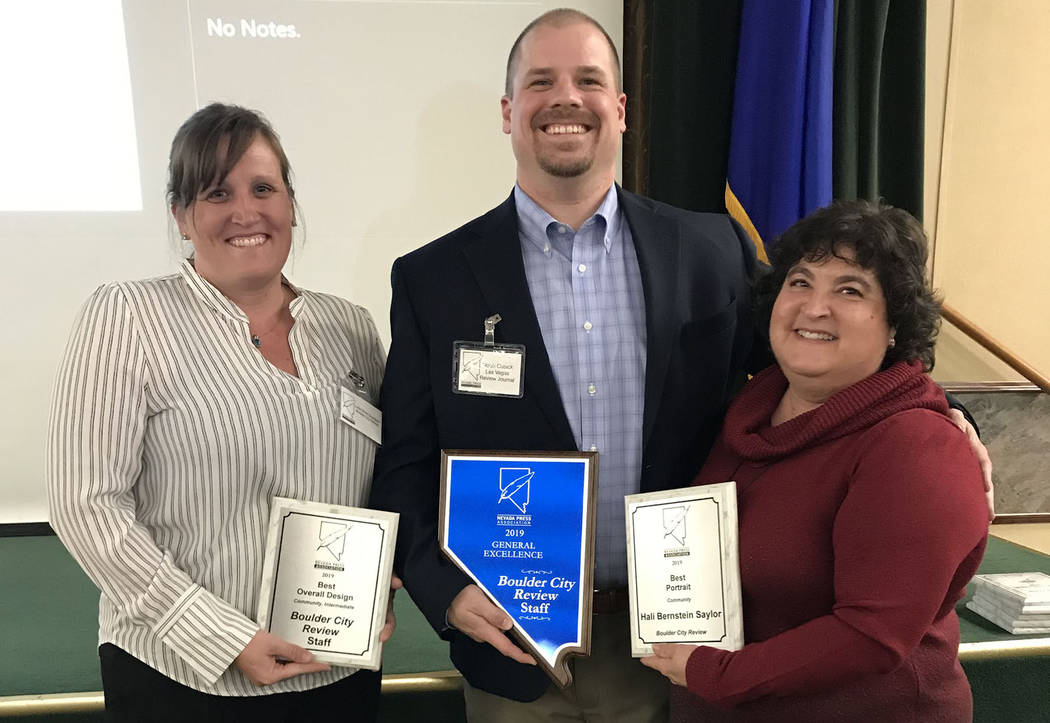 For the second consecutive year, the Boulder City Review has earned the top award for general excellence for a publication its size by the Nevada Press Association.

The award, along with 10 others, was presented Saturday, Sept. 21, night during the association’s annual convention, which was held in Ely. In all, the paper received three first-place awards, five second-place awards and three third-place awards in the 2019 Better Newspaper Contest.

“The honor of winning this award for the second consecutive year has more impact because of the competition we were up against,” said Publisher Noah Cusick. “The other newspapers in our category had a very strong showing and that makes this even sweeter.”

In addition to general excellence, the paper received the top award for overall design, which vied in the combined intermediate-community category, and Editor Hali Bernstein Saylor received first place for her portrait of Dale Ryan and his Christmas decorations, both second consecutive top awards in those competitions.

In presenting the paper with first place for overall design, judges commended the staff for its use of colorful photos.

“This image really shows the energy and enjoyment the subject experiences around building his holiday display. The image quality and editing are both excellent. Photo really draws the viewer into the subject,” the judges wrote about Bernstein Saylor’s photograph of Ryan.

The judges said Shortt Goodyear’s photo at the animal shelter captured “how much they are involved in their work and the puppies’ faces are adorable … a really good image in terms of storytelling.”

The staff was presented with a second-place award for page one design and its editorial page, which competed in the combined intermediate-community division.

“It’s clear that the writers in Boulder City know the issues and, better yet, the people in their community. It’s a pleasure to read a paper that knows its words can make the community better and uses them for good,” the judges wrote when singling out the editorial page.

Shortt Goodyear received second place in featuring writing for her piece on the city’s K-9 unit, which was called “engaging” by the judges.

Bernstein Saylor also placed third for her feature photograph of spring along the Colorado River.

Members of the Arizona Press Association judged this year’s contest.