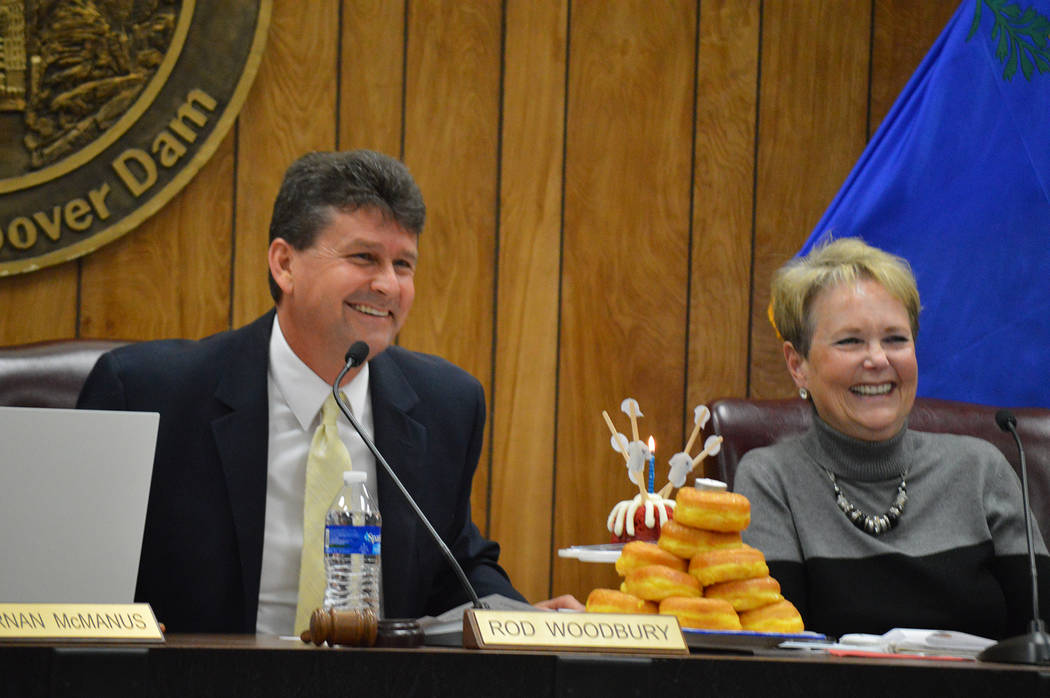 (Celia Shortt Goodyear/Boulder City Review) Mayor Rod Woodbury was recognized for his upcoming birthday at the City Council meeting Tuesday, March 12. His family brought him a cake and doughnuts for everyone else at the meeting.

City Council is still divided about moving forward with another step for the proposed aquatic center.

At its meeting Tuesday, March 12, council approved a resolution in a 3-1 vote declaring the necessity of incurring bond indebtedness on behalf of the city and calling a bond election for June 11. Councilman Kiernan McManus voted against it and Councilman Warren Harhay abstained.

“This is a procedural resolution required by bond counsel and it’s to ensure we are notifying the public of the upcoming bond question on the June election ballot,” said Boulder City Finance Director Diane Pelletier. “This is for the aquatic center.”

McManus expressed concern because the city was being asked again to approve something that was “way more” than the original amount.

“When it was originally submitted, it was at $21 million,” he said. “Then went to 27. Then 37. Now we’re at 40. The total cost of this will be approximately $80 million to the taxpayers over the life of these bonds if they were to be approved for $40 million. Isn’t that correct?”

Pelletier said that it was correct because of the interest rate used in the net calculations, but it does not mean the city will issue all of the $40 million in bonds.

At the Feb. 26 council meeting, City Manager Al Noyola said the original estimate from the architect for the pool was just for construction costs. Once all the other elements were added, the total amount grew.

McManus said he was also concerned that neither the resolution nor the ballot question were not specific as to what the project was and its location. The ballot question asks whether the city be authorized to issue up to $40 million in general obligation bonds for the purpose of acquiring, constructing, improving and equipping recreation projects as defined in NRS 268.710, including an aquatic center.

He motioned amending the resolution to specify it was a replacement for the municipal pool and should only be located in Broadbent Park.

Noyola cautioned changing the wording to pool because then it meant that was the only thing that could go there. It would not included any function outside of the pool such as offices, office furniture and the mechanical room and its equipment.

McManus’ motion died for lack of a second.

McManus also said he could find no state requirement for this proposed resolution and believed this was something the council could do after the election if the question passes.

“It is a requirement,” said City Attorney Steve Morris. “It is recommended by bond counsel. The voters will (still) have to approve it (the ballot question). … We are following the advice of bond counsel in this regard.”

City Clerk Lorene Krumm said she had talked to the city’s bond counsel and asked that same question: if the city had to take action on this resolution because the bond issue was on the general election ballot.

“He advised me that it is required by law,” she said.

Additionally, Krumm said that if they don’t follow what the bond counsel says to do, it will not respond favorably to the bond request.

McManus said that info should have been in the council’s agenda packet.

“I don’t see any reason to question it,” Councilman Rich Shuman said about the resolution.

He said since the council was moving forward with the ballot question it was “more than appropriate” for them to follow the bond counsel’s recommendation.

“In order to be consistent with the position I took at the last council meeting, I cannot vote ‘aye’ in this particular resolution,” Harhay said. “But correspondingly, I cannot vote ‘nay’ as well because I don’t wish to hold the process up.”

After the resolution passed, McManus also questioned whether it was valid because it passed with a two-thirds majority. He cited NRS 350.020 section 3, which mentions that majority.

Morris said he would look into that issue.