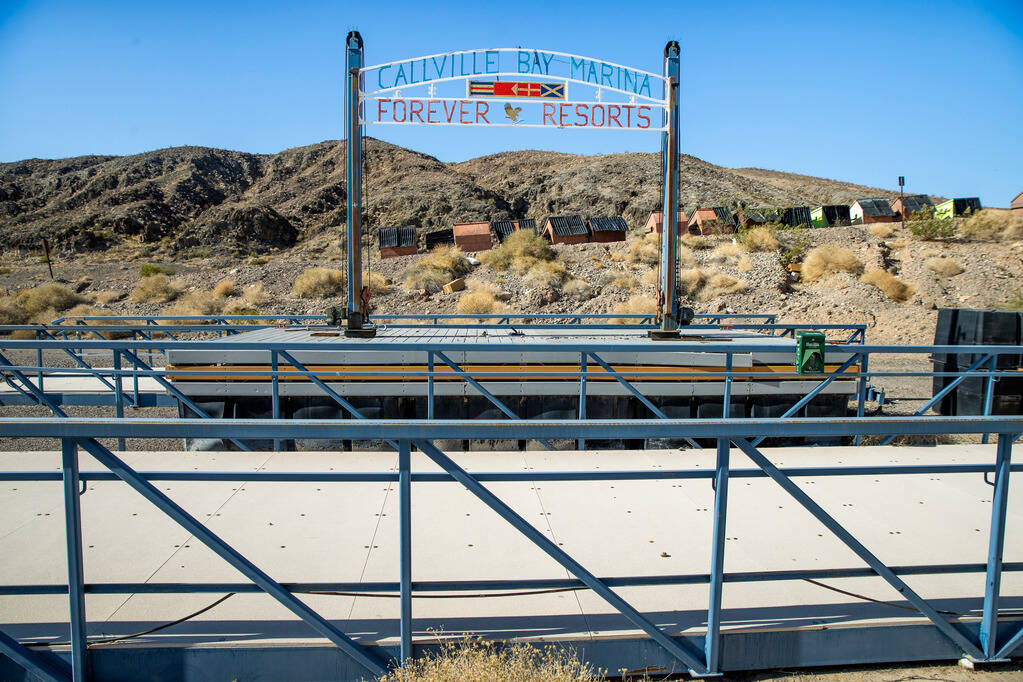 (L.E. Baskow/Las Vegas Review-Journal) An old floating dock for the Callville Bay Marina and Forever Resorts sits high on the bank in Callville Bay along the shoreline at Lake Mead National Recreation Area in May. A new adaptive ramp is being added to provided greater access to the water.

Lake Mead Mohave Adventures said in a press release that the Mobi-mat provides a way for boaters to launch watercraft at Lake Mead and keep the reservoir accessible to the public.

“The Mobi-mat is a patented, roll-out polyester beach access mat, designed for creating boat launches and accommodating light and medium vehicle traffic on supporting but unstable grounds such as sand, soil, mud and gravel on the shoreline of lakes,” the release said. “These mats are recognized by the most demanding expeditionary units in the world as amphibious landing roadways. The Mobi-mat assures vehicle mobility once on shore, whatever the vehicle load.”

The installation of the ramp took place Jan. 18. Details on its availability have not been announced.

The National Park Service is undergoing a review process to determine how to handle the repositioning of boat ramps and possibly permanent closures as the water level at Lake Mead continues to decline.

The public comment period on the proposal ended Sunday, Jan. 22.

The park service closed the launch ramp at Echo Bay in May, which left Hemenway Harbor as the only official launch ramp on the lake, which sees roughly 7.5 million visitors a year, about 20 percent of whom are boaters.

On Jan. 19, Sen. Jacky Rosen, D-Nev., sent a letter to National Park Service Director Charlie Sams detailing her opposition to part of the proposal that could shutter all boat ramps at the lake.

In the letter, Rosen said her office has heard from nearly 600 Nevadans who have expressed concern over that option, which would effectively curtail boating access to the reservoir that sees more than 7 million annually.

“Concept 3 is not a solution, but rather will greatly reduce recreation and visitation and shut the doors of small businesses in Southern Nevada, depleting critical revenue streams for local economies,” Rosen wrote in the letter.

She called on the park service to develop “creative and sustainable solutions” without removing access completely and said that she would look for ways to secure the funding needed to find a “viable path forward for the Lake Mead National Recreation Area.”