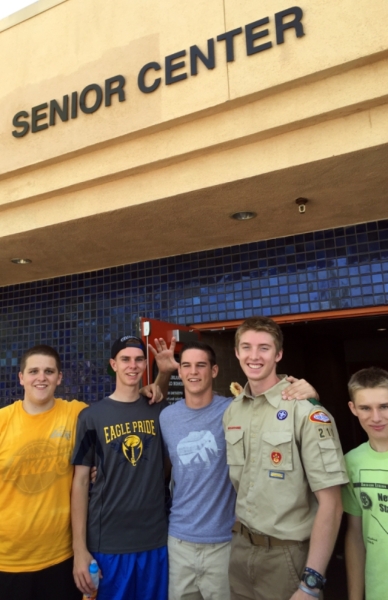 Brian Johnson of Boulder City takes the words of the Boy Scout oath to heart, especially the part about helping other people at all times.

The Boulder City High School senior and member of Troop 211, sponsored by the Lakeview Board of The Church of Jesus Christ of Latter-day Saints, recently coordinated an Eagle Scout project that will help the hundreds of local residents who use the Senior Center of Boulder City.

His project involved cleaning out “years of stuff” from the basement so that it can be turned into a useful space and renovating the foyer.

Johnson said he had been looking for an Eagle Scout project when his grandmother, Susan Johnson, president of the senior center’s board of directors, said they could use a “helping hand” getting the facility renovated.

Brian Johnson said his project involved removing dated wallpaper from the foyer; patching, retexturing and painting the walls a light color; and sanding and restaining the baseboards.

“It’s beautiful. They did such a lovely job,” said Erma Hall, who volunteers at the center twice a week and serves on the board of directors.

Hall said she believes the brighter foyer will help provide a welcoming presence.

“People will notice. We have the same people come every day,” she said.

Victoria Mason, executive director of the center, said the foyer hadn’t been touched since the building was the old library. It was dark and dingy, she added.

Mason said all of the medical equipment that the center has to loan to seniors in need is stored in the basement. It was so overcrowded that staff and volunteers couldn’t see what they had.

“We can walk through the aisles,” Mason said. “Now, we have to keep it that way.”

Hall and Mason praised the Scouts and volunteers for their enthusiasm and hard work.

Tackling the basement was the biggest priority for the workers. Johnson said they formed an assembly line to haul out “hundreds and hundreds of boxes.”

Johnson said one of the most interesting aspects of working on an Eagle Scout project was that he wasn’t actually able to work. His role was to supervise and delegate tasks to those he recruited to help him.

“It was a great experience learning how to lead without working,” he said.

About 60 people, including 21 of Johnson’s fellow Scouts and the foreign exchange student of a friend, helped.

“I couldn’t be more grateful for every single one,” he said.

Now that the project is complete, Johnson has to turn in paperwork and wait for a review where he will be interviewed about his project and experience to determine if he is ready to become an Eagle.

Of earning the Eagle Scout designation Johnson said, “It’s hard to find a better program to provide the fundamental skills for a boy to become a man.”

Johnson has been involved with the Scouts since he was 8.

He said being a Scout has been an “amazing” experience. He said he treasures the friendships he has made and values the skills he learned while earning multiple merit badges.

The son of Charlaan and Martin Johnson of Boulder City, he vice president of the student body at Boulder City High. He was a member of the soccer team and plans to join the track team this year.

After graduating from high school, Johnson said he plans to go on a mission for his church.