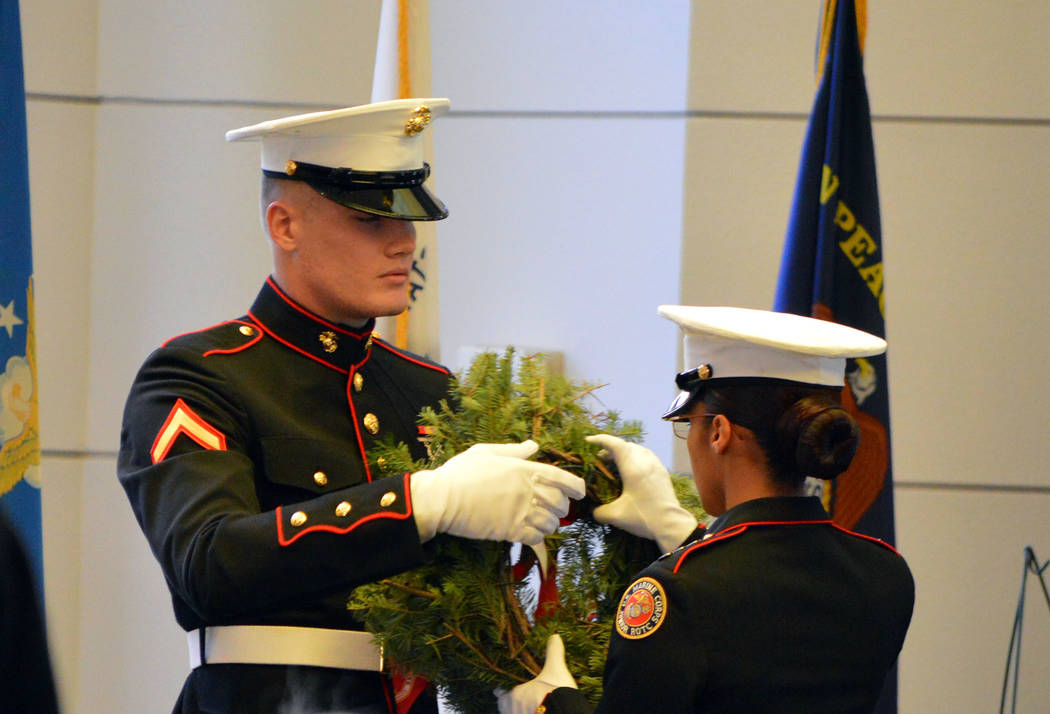 (Celia Shortt Goodyear/Boulder City Review) A United States Marine Corps Pfc. passes a wreath to a USMC Junior ROTC member during the placement of ceremonial wreaths, symbolizing pass the torch to the younger generation, during Saturday's Wreaths Across America at the Southern Nevada Veterans Memorial Cemetery. 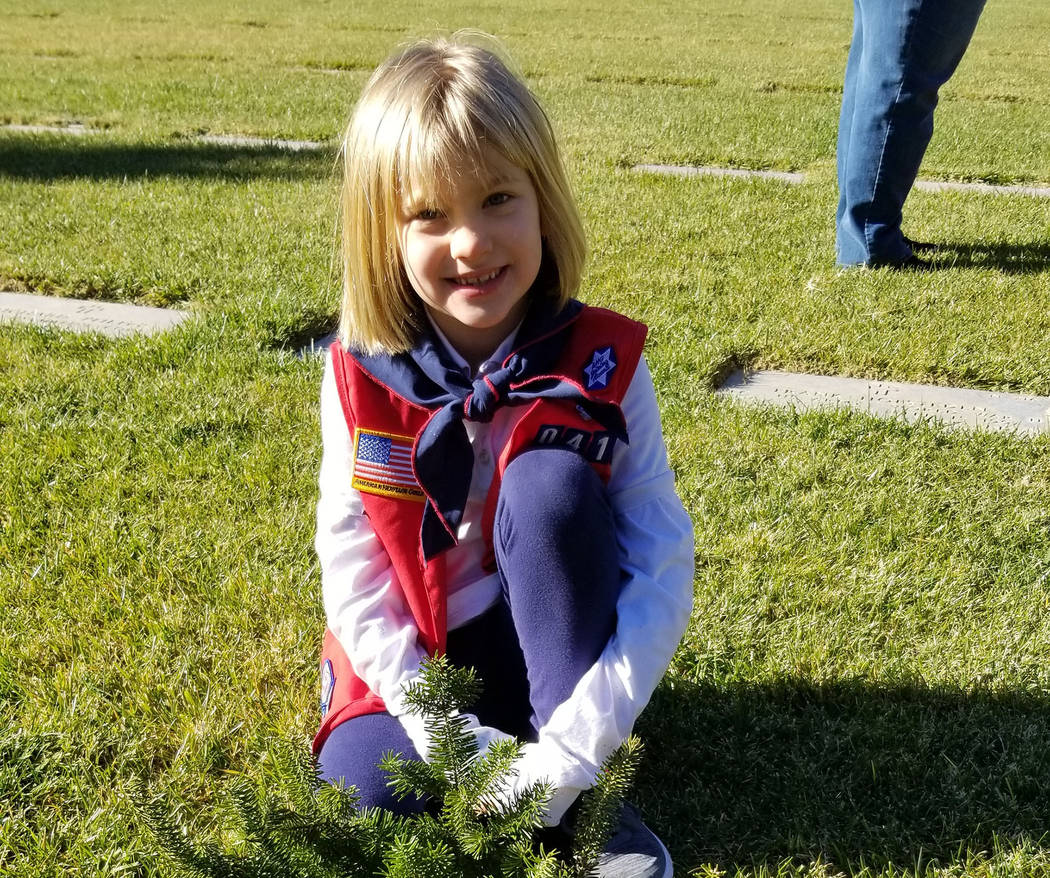 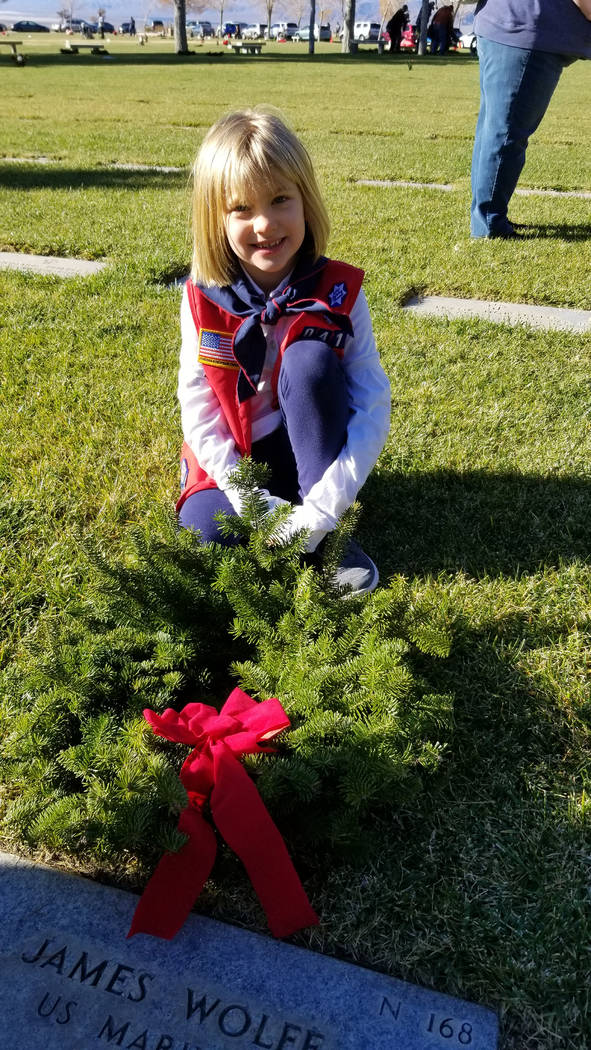 Saturday was a day to honor veterans’ sacrifice through the local Wreaths Across America program at the Southern Nevada Veterans Memorial Cemetery in Boulder City.

The National Wreaths Across America Day is a part of a program that remembers and honors veterans by having volunteers place wreaths on their graves. Its mission is to remember, honor and teach by coordinating and carrying out these ceremonies at cemeteries all over the United States, including Arlington National Cemetery.

In Boulder City, the day featured a program, followed by a time for the volunteers to place thousands of wreaths on veterans’ graves. For some it was their first time participating.

“I’ve wanted to do it for years, but I didn’t know who to contact,” said JeAnne Blackman of Henderson.

Blackman has two husbands buried at the Southern Nevada Veterans Memorial Cemetery, both of whom served in the U.S. Navy. This year, her friend’s church sponsored wreaths for both of their graves.

Blackman said the program is fantastic, and she plans to participate in Wreaths Across America each year.

All three women are also involved with Quilts of Valor and are members of the group Quilters for Veterans for Sun City Anthem.

“This year, we (the quilting group) were able to sponsor 152 wreaths to add,” said DeFrancesco.

Mandeville’s husband, David, died Sept. 10, 2017, and is buried at the cemetery. She said she was going to place one of those wreaths on his grave.

Eight-year-old Cub Scout Ben Williams was participating in his third Wreaths Across America and said he enjoyed laying the wreaths on veterans’ graves because it shows his and others’ respect for them.

At this year’s ceremony, volunteers laid more than 5,000 wreaths on graves at the Southern Nevada Veterans Memorial Cemetery.

Prior to placing the wreaths, there was a program featuring Las Vegas City Councilman Steve Seroka, a retired U.S. Air Force colonel, as the keynote speaker.

“This is a somber event but one in which we should take great pride,” he said.

In addition to veterans, Seroka honored their families’ sacrifices.

“It’s a team effort,” he said. “It is a family effort. They all sacrifice.”

Seroka also encouraged everyone to honor those veterans who were gone by leading their lives with character and moral courage, as well as being agreeable with everyone, including those with whom they did not agree.

Saturday’s ceremony included placing wreaths for each branch of the military, the Merchant Marine, prisoners of war and those missing in action. In addition to remembering those veterans, the placement symbolized the passing of the torch to the younger generation through participation by military cadets, active service members and retired service members.

Cemetery superintendent Chris Naylor said 5,022 wreaths were donated this year, which was over 1,000 more than in 2017.