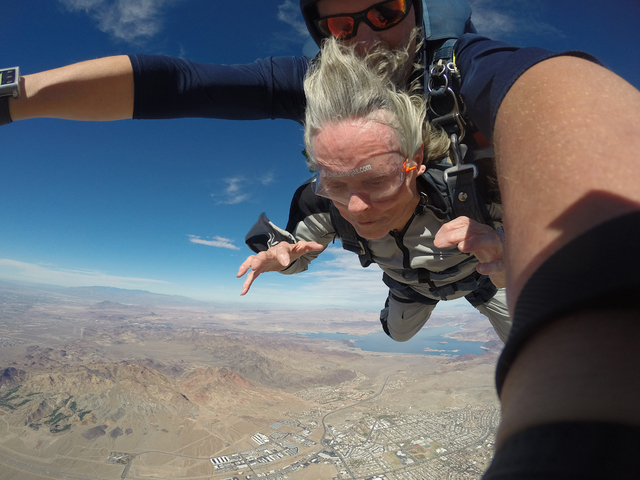 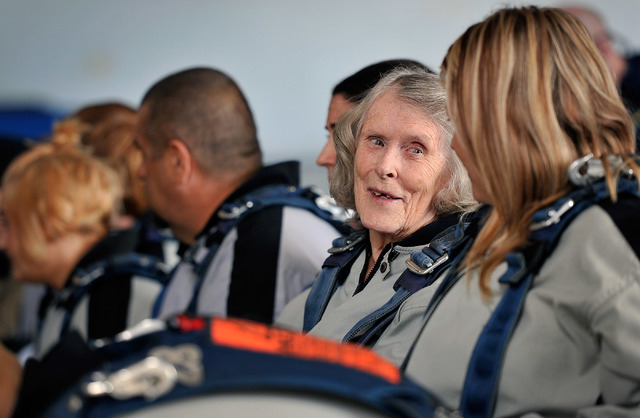 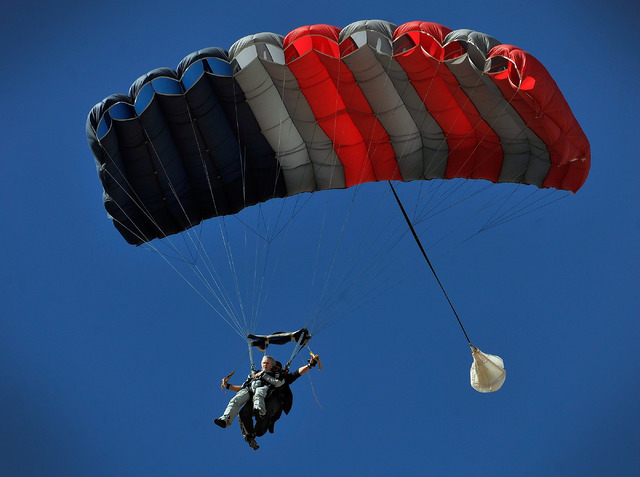 “It was every bit and more (as much fun as I remembered),” said Katherine “Dolly” Hetrick of Las Vegas, who celebrated her 90th birthday Friday by skydiving — for the fourth time. “You just don’t know how that feels.”

Her first jump was 15 years ago on her 75th birthday. She also jumped on her 80th and 85th birthdays.

Hetrick tandem jumped with Kyle Leseberg, a skydiving instructor with Skydive Las Vegas, based out of Boulder City Municipal Airport. They flew up to about 15,000 feet above sea level, fell about 8,000 feet and then released their parachute before gently floating the remaining 5,000 feet until they reached the ground.

The smile on her face told the story.

“It was good for my hair,” the great-grandmother jokingly told her family and friends who came to watch her dive.

While two of her three children were there to support her, they weren’t necessarily in favor of her skydiving.

“I don’t like it,” said her daughter, Kathy Schuller, of Phoenix. “I didn’t like it the first time. It scares me. To me, she’s so little, so fragile.”

“I have no desire to do it, but if she want to do it … . It scares the hell out of me. That’s why I kissed her on the forehead and left,” said son Steve Hetrick, of Las Vegas.

Still, Steve Hetrick said he has been at every jump to support his mother.

Dolly Hetrick said the view and feeling she gets while skydiving are indescribable and she has tried to get her family to join her.

“I tell all the chickens down there to come with me,” she said.

While she may consider herself a rebel, Hetrick said she isn’t a daredevil. She said she has no desire to try any other sort of adventurous activities, especially those that involve water.

She never learned to swim.

She said she prefers to do crafts, especially quilting, and the rebel in her will admit to running with scissors.

Not one to sit still, Hetrick retired just three days before her 90th birthday after 22½ years with Hancock Fabrics.

While waiting for her to arrive at the jump zone, friends and family began taking bets about how long they thought she would stay retired.

No more than three to six months, they said.