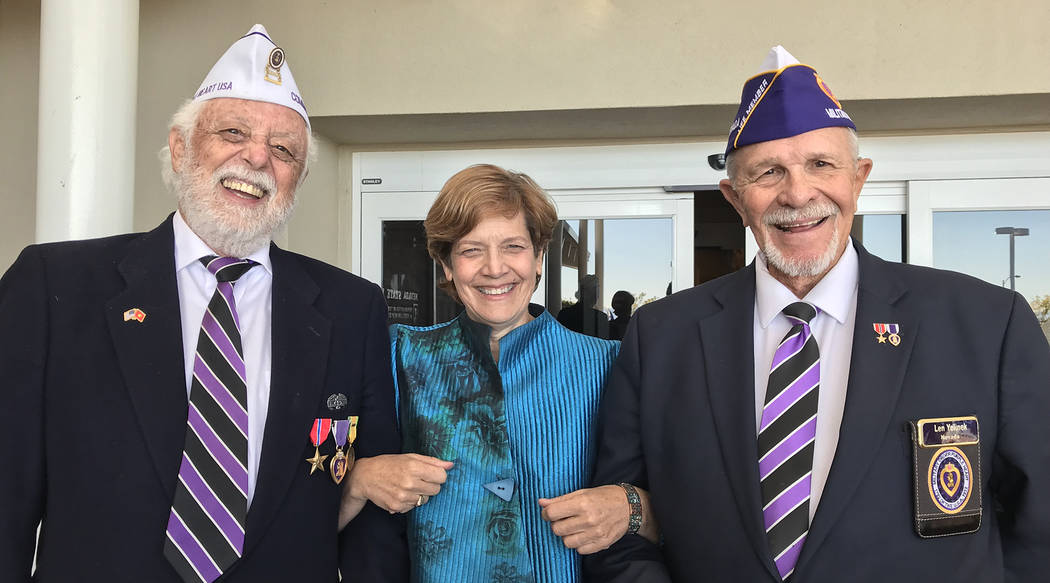 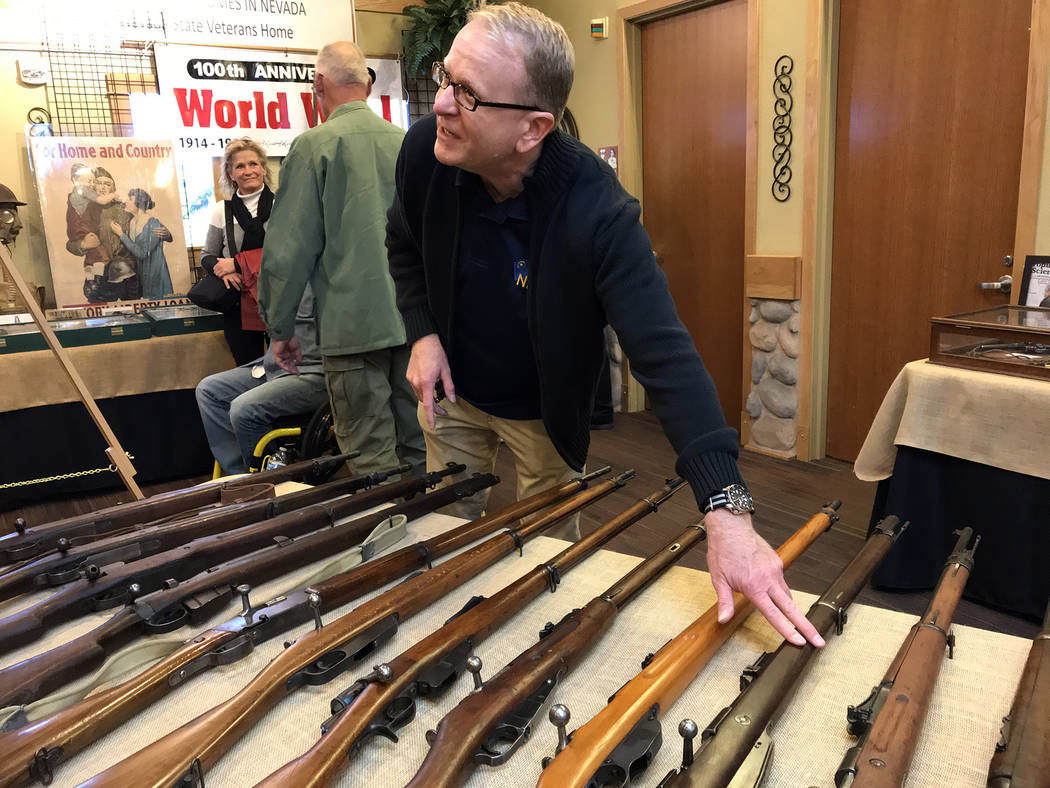 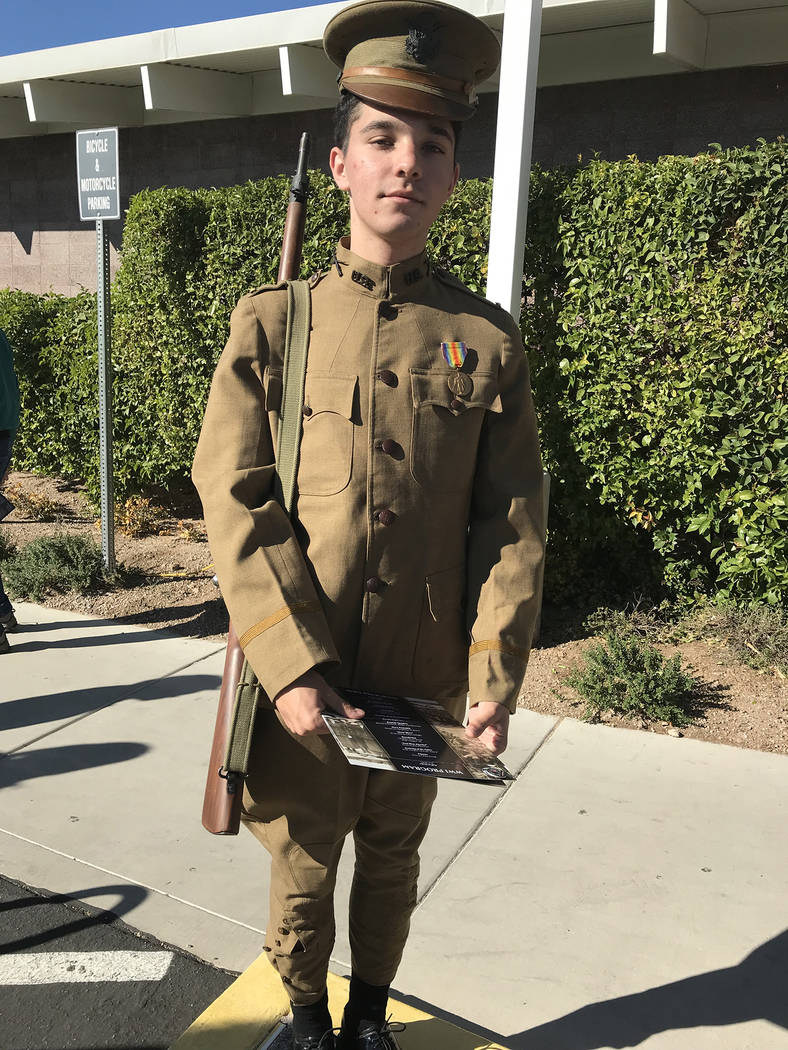 (Hali Bernstein Saylor/Boulder City Review) Dylan Signore, 15, a student at Rancho High School, dressed in a World War I military uniform as the 100th anniversary of the armistice was recalled during Veterans Day ceremonies Sunday, Nov. 11, 2018, at the Nevada State Veterans Home. His grandfather, Joel Forman, is commander of the state American Legion organization. 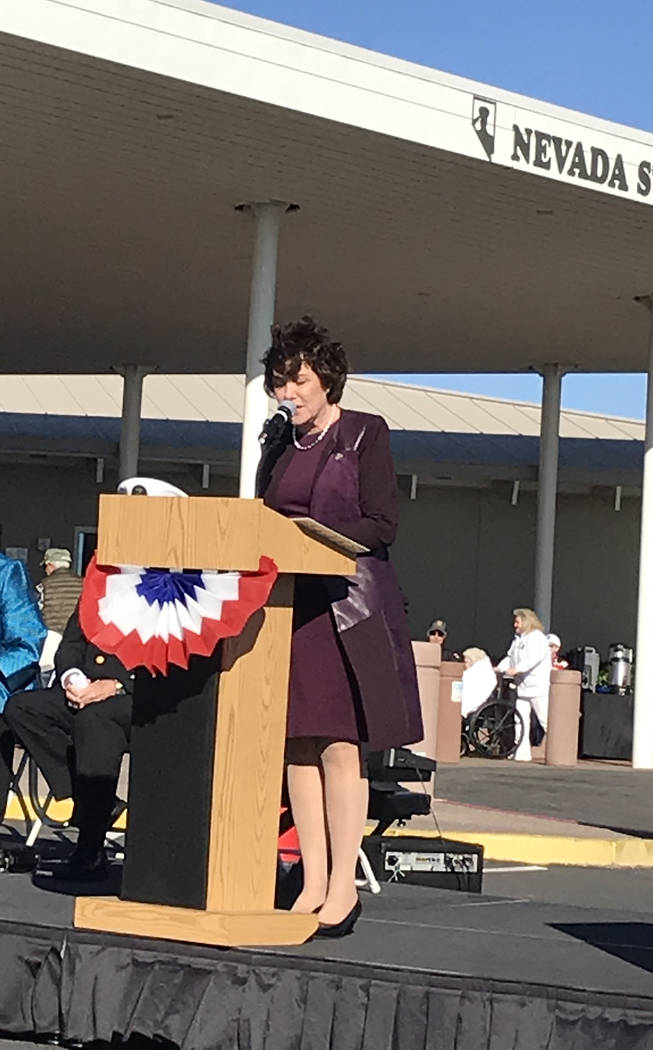 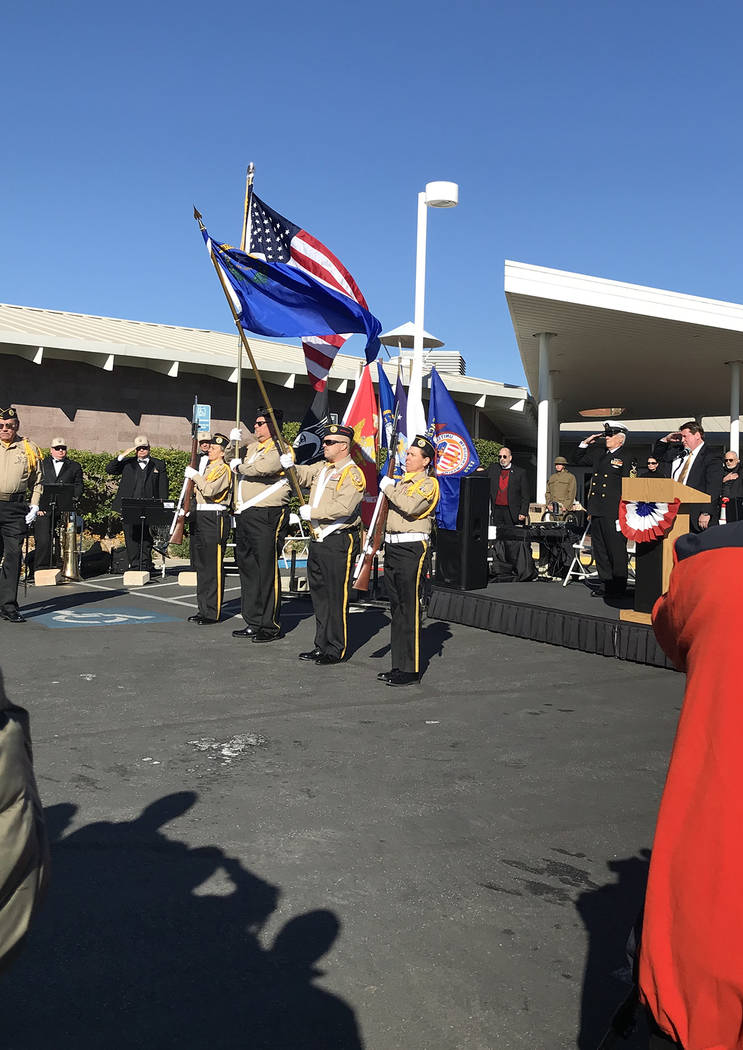 Nearly 100 years to the moment after World War I officially ended, the sacrifices made by those who fought and died in the battle, along with those who served in every war before and after, were honored during ceremonies Sunday, Nov. 11, at the Nevada State Veterans Home.

Kat Miller, director of the Nevada Department of Veterans Services, said the annual observance, held on the anniversary of the end of the war to end all wars, is especially fitting for those from the Battle Born state.

Their memory lived on as a program listing each of their names was distributed to those attending.

A special proclamation issued by Gov. Brian Sandoval honoring the centennial of the armistice was read and each person attending was given a commemorative pin marking the anniversary.

As Miller introduced guests and dignitaries, she said “our most distinguished visitors are not visitors. They are residents of the Nevada State Veterans Home.”

The residents, bundled to protect themselves from the chilling wind, shared their patriotism by singing loudly during a rendition of “God Bless America” and sporting red, white and blue attire.

“We owe (veterans) a debt of gratitude that can never be repaid,” said Rep. Jacky Rosen, who expressed her appreciation for veterans’ service.

“Perhaps the most rewarding part of the trip, … involved meeting the remarkable veterans at the veterans home,” said keynote speaker Patrick K. O’Donnell, a combat historian and best-selling author. “These men and women are living national treasures — they fought in the jungles of Guadalcanal, the frozen tundra of Korea’s Chosin Reservoir, Vietnam and Iraq,” he said.

O’Donnell spoke about his latest book, “The Unknowns: The Untold Story of America’s Unknown Soldier and WWI’s Most Decorated Soldiers Who Brought Him Home,” which tells the story of the war, putting readers in the middle of battles and trenches, as he introduces the eight heroic veterans who were selected by Gen. John Pershing to carry the body of the Unknown Soldier when he was laid to rest at Arlington National Cemetery.

One of those men, Harry Taylor, was from Nevada and served in the Wild West (91st Infantry) Division that helped drive the German across the Escaut River in France, he said.

“Largely made up of Nevada soldiers, this unit took on an impossible objective: to crack a segment of the Hindenburg Line manned by some of the Imperial German Army’s toughest troops — a suicide mission. The Wild Westerners attacked across a mile-long open field, braving hundreds of machine guns, barrages of German artillery and deadly poison gas — and they succeeded.”

O’Donnell, who was embedded with a Marine rifle platoon during the Battle of Fallujah, survived several ambushes and carried a mortally wounded Marine out of a fight with Chechen insurgents.

He said he felt a connection between Iraq War and World War I veterans as both were unrecognized for their efforts, which helped lead him to his most recent book, and he was honored to deliver the keynote address.