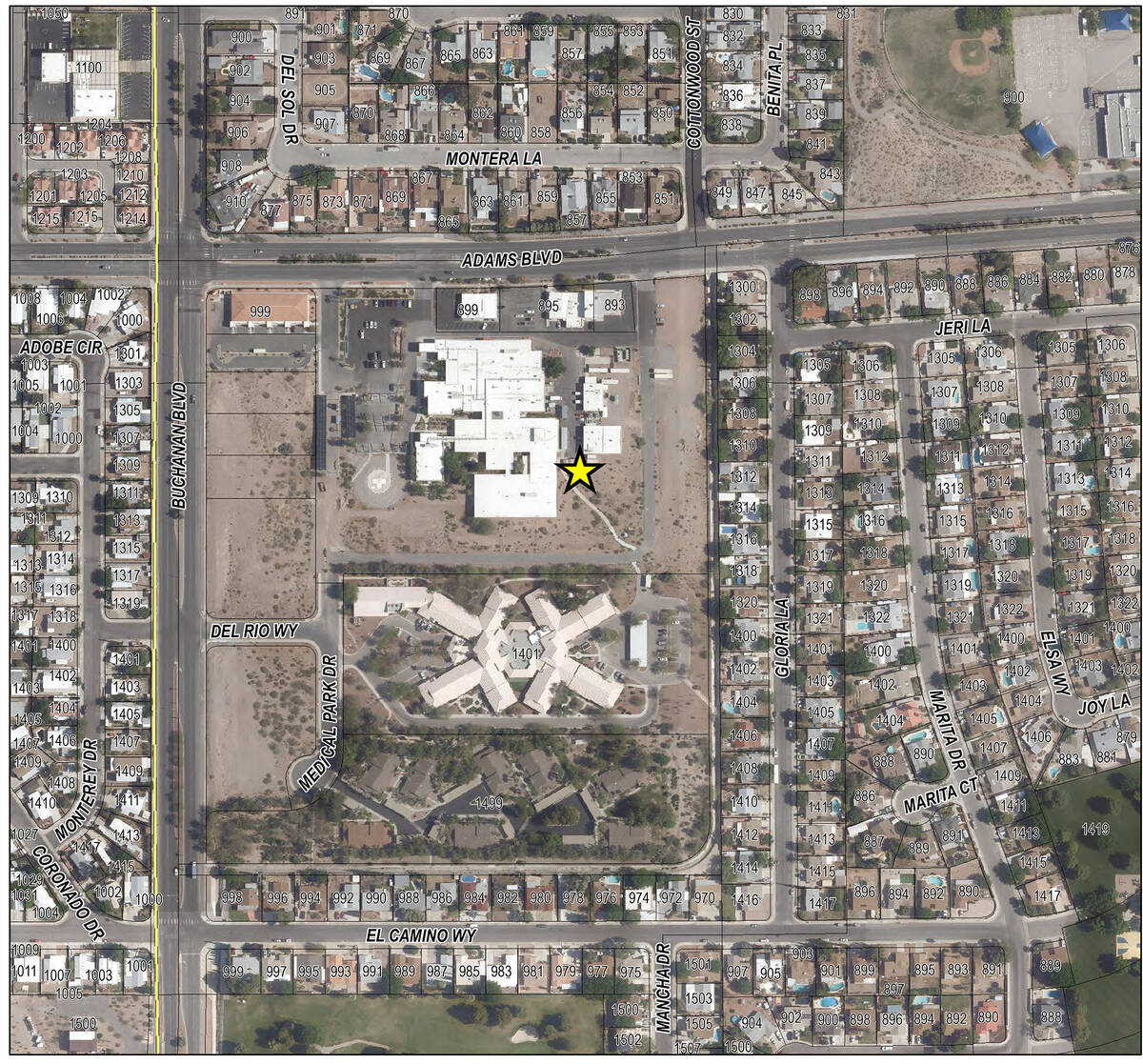 At its Sept. 15 meeting, the Planning Commission approved a conditional use permit for a new wireless communications tower at 901 Adams Blvd. in a 6-1 vote.

The hospital requested the tower and, in a letter to City Planner Susan Danielewicz, Boulder City Hospital CEO Thomas Maher said it would “improve critical coverage and service for the hospital.”

It would also provide better coverage to T-Mobile customers to the south and west of the proposed tower.

“This tower serves two purposes,” said Chris Wener, owner of Spectrum Services LLC, a telecommunications infrastructure vendor. “It’s for the hospital and to cover the rest of those rooftops.”

Spectrum is representing T-Mobile for this application. BCH’s cost for the tower would be paid for through a monthly contract with the company.

Planning Commissioner Tom Marvin asked how the tower would improve communications at the hospital.

Wener said it would improve the communications within the facility because its thick concrete walls and X-ray facilities can block signals inside.

Despite providing better service for the public and for the hospital, some residents said they were against installing the tower at that location.

“I don’t want this thing adversely affecting our property values,” said Russell Nixon, who lives on Gloria Lane near the proposed location. “If someone wants to buy my property, I don’t want to have to worry about people looking out behind and seeing this tower. I just don’t think it’s appropriate.”

“It’s an eyesore for us,” said Bill Ditrapani, who also lives near the proposed tower. “I’ve lived in this house since 1973. It’s been fine … but if this goes in, it’s going to be terrible. … Put it out on the highway, put it out in the desert but not near my house.”

They suggested finding a different location for the proposed tower.

Wener said the current location was the best to serve the residents with poor cellphone service and the hospital. Moving it would take it out of the direct proximity to those residents.

He also said that a lot of times large hospitals use an internal distributed antenna system to improve the signal inside of a building, but that wouldn’t provide coverage outside of the building.

Planning Commission Chairman Paul Matuska asked if the communications equipment could be installed on an existing power line in the area.

Wener said that’s possible, but it would have to be put below the lowest electric conductors on the pole and generally that wasn’t high enough for the signal to reach homes.

He would also need to check with the city’s Public Works Department to see if it was allowed and if the poles were available.

“I do know that this part of the community does suffer from lack of really good cell coverage or even adequate cell coverage to some degree. … So, I think it’s a valid concern for the city of Boulder City,” said Matuska.

He also said it could be a “notable expense” to the hospital to install the internal antenna system.

Planning Commissioner Beth Bonnar said her biggest concern with the proposal was that no information about the number of people who would be helped by the new tower was provided.

“I’m not for this based on what’s been provided so far,” she said.

She also suggested bringing the item back with that information at a later meeting.

Planning Commissioner Matt DiTeresa said he thought it was a situation of aesthetics vs. public good.

“I doubt if we had another hearing that people would show up in favor of a cell tower,” he said. “People just don’t do that. My opinion right now is that I’m in favor of it, and I understand … the residents in the area and their objections. … This is a single, 75-foot cell tower. It’s not a development of radio towers. I don’t think it’s really going to be that aesthetically unpleasing.”

All the commissioners voted for the conditional permit as it was presented, with Bonnar casting the only vote against it.

The permit for the tower will only go before City Council if no appeals against the approval are filed.