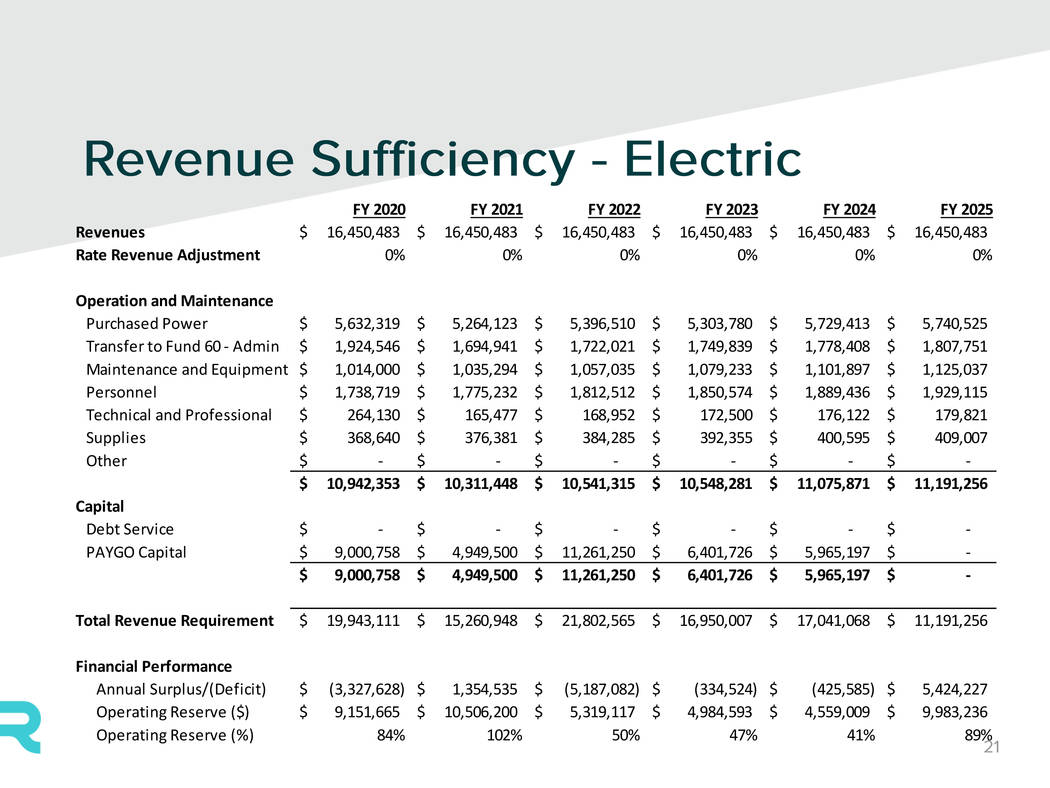 Boulder City In its preliminary report, Raftelis Financial Consultants Inc. said the city's electric fund has enough revenues for its capital improvement projects but that could change depending on the city's needs.

Boulder City’s utility rate study has started and shows there are enough projected financial reserves for its capital improvement projects, but that could change depending on the city’s needs.

Last year the city contracted with Raftelis Financial Consultants Inc. to conduct a study of the city’s utility rates, the cost of serving the utilities and the structure of the funds to support the city, as well as developing a five-year plan for the funds. According to city documents, the work started Sept. 23.

“It means that based on the current CIP (capital improvement plan) there should be sufficient revenues plus available fund balances to cover operating and maintenance as well as the CIP for the electric utility,” Utilities Director Dennis Porter wrote in an email. “This is assuming that the current CIP does not increase, which it likely will, and that the utility continues to receive land sale subsidies through at least FY (fiscal year) 2023.”

The required operating reserve is at least 20 percent of operations and maintenance.

According to the preliminary report, the five-year projection of those revenues will keep the electric fund’s operating reserves at a surplus through fiscal 2025. The surpluses are projected to range from 47 percent to 102 percent.

Committee member Eileen Wilkinson asked if that meant the city had more reserves than it needed.

“Need is a relative term,” she added.

Boulder City Finance Director Diane Pelletier said she recommends keeping a higher level of reserves because the city pays as it goes for its projects.

“There could be some major problem that we don’t know about at this time, and because Boulder City is a ‘paygo,’ pay as you go city, we need to have higher reserves than the normal entity,” she said. “If they have a problem, they can go out to bond and have that cash to fix it. So just keep that in mind when you’re looking at the cash balances.”

Pelletier also said the cash balances may look higher, but it could because they are based on the city’s needs for the next five years.

“We don’t know if some major incident could occur and all of a sudden we need cash,” she added.

“It is an industry best practice to maintain certain reserves for a number of reasons such as rate stability, emergencies — catastrophic or otherwise — or debt service coverage,” added Porter in an email. “As an example, if there were to be an earthquake or some type of natural event like that, it could significantly damage portions of our infrastructure and the reserves would go a long way in addressing the damage as quickly as possible.”

Raftelis representative Tom Beckley said the reserves will be drawn down because of the projects in the capital improvement plan.

“When you look at (the reserves) in four years, we’re going to be down to 41 percent,” he said. “Yes, that’s still a lot more than 20 percent, but it’s certainly nowhere near 102 percent.”

He also said the extra reserves do not mean rates should be reduced.

“Well certainly, you could say, ‘We can lower rates 20 percent this year,’ ” he said. “You could, and then you’re just going to have to raise them 20 percent next year because you would draw down all the reserves.”

The initial study also found that the city’s utility rate structure is different than other cities.

With the electric rates, Beckley said the nonresidential rates are higher than the residential ones, and usually it is the opposite. Additionally, the cost to distribute the power is 70 percent of the overall cost, and the electricity itself is 30 percent. Usually, those costs are reversed.

No reason for the difference in structure was given.

Porter said the project is a “work-in-progress” and the next step will be a cost of service analysis that will be presented in March.