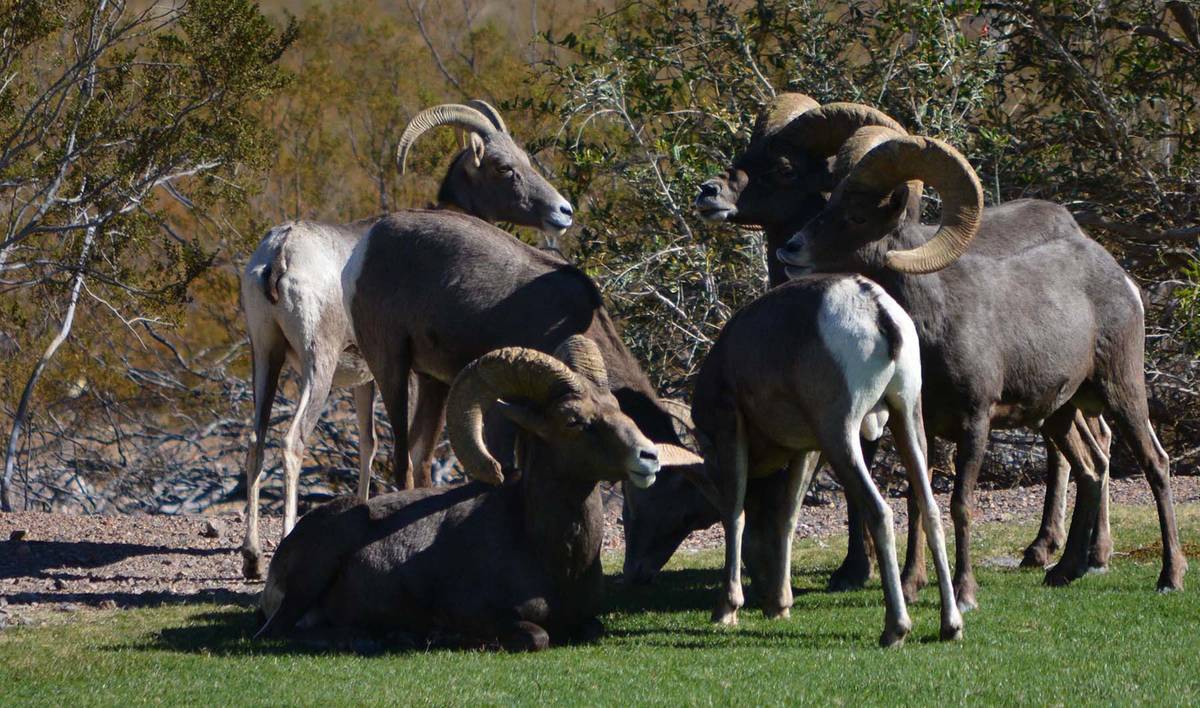 (Pernell Bryant/Special to the Boulder City Review) Bighorn sheep, seen at Hemenway Valley Park on Nov. 10, will be tested by the Nevada Department of Wildlife in April to check on their health, looking specifically for pneumonia, which has had a significant impact on the species in the River Mountains.

According to the city, sometime in April, NDOW biologists and the state wildlife veterinarian will do diagnostic testing of 10 to 12 female sheep. Disease surveillance is the primary goal of the testing, especially as pneumonia has had a significant impact on the species in the River Mountains.

They also plan to remove identification collars from as many as seven sheep. To do this safely, the sheep will be tranquilized for a short amount of time.

“We will use a dart rifle with a safe tranquilizer that will cause the sheep to sleep for a while so that they are immobilized,” said Pat Cummings, game biologist for NDOW. “Our objective is to obtain blood samples, oral-phyrangeal nasal swab samples and through diagnostic testing, we’ll be getting some baseline information on the health status of the herd.”

Testing and work should take about a half hour per sheep and they will be given an antidote that will allow them to wake up like nothing ever happened. NDOW staff will use the gazebos in the park as a working area.

Staff will be driving marked vehicles and wearing NDOW uniforms. The department is asking residents to be cautious and keep their distance as staff completes the testing, helping to keep the environment unchanged so it doesn’t scare off the sheep.

NDOW did similar testing in May 2016 and put multicolor identification collars on several sheep.

“We were looking at the longevity of the female population and wanted to see if we could reliably discern which ewes had an attendant lamb,” Cummings said. “Now, years later, the collars no longer serve a purpose. We’ve also heard from residents presuming that the collars are too tight. We assure you that is not the case, but we would like to remove them so we can alleviate the concerns of residents.”

For more information about the testing, contact Doug Nielsen at dnielsen@ndow.org.