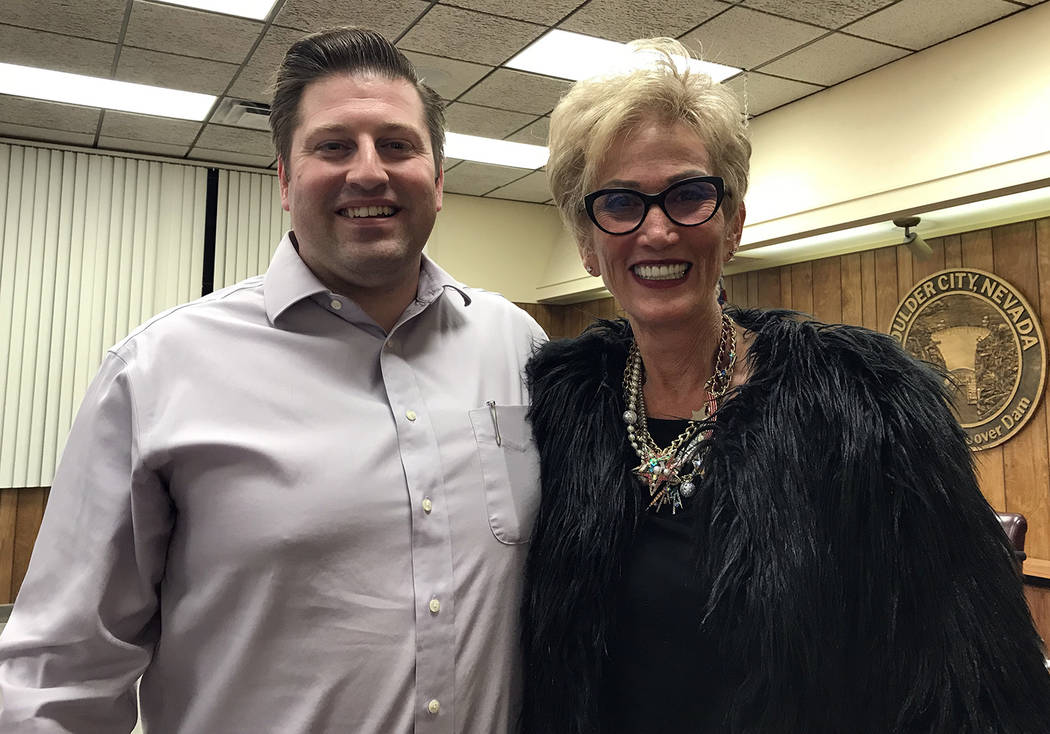 Outgoing Boulder City Planning Commissioners Fritz McDonald and Cokie Booth said they will miss serving the community as part of the city’s leadership. They are pictured here after the January 2018 meeting when they were elected charmain and vice chairman of the group.

Boulder City’s two outgoing planning commissioners intend to stay busy with the community despite no longer being a part of the local leadership.

Chairman Fritz McDonald and Vice Chairman Cokie Booth attended their last meeting Dec. 18, as their terms end in January and neither was reappointed by the City Council.

“I’ll keep myself busy because I hate not being busy. … I don’t like to sit still,” said Booth, who has been on the Planning Commission since 2006.

“I’ll miss being able to serve my community and the friendships I’ve made at the city,” she added.

Booth has lived in town for 30 years, owns a local business and is president of the Boulder City Community Club.

“I think you should be a diverse group … . It bothers me that there is no diversity on the City Council,” she said. “I feel like they are all part of the alliance. The diversity is male and female, but that’s it.”

The Boulder City Community Alliance is a closed Facebook group that endorsed Mayor Kiernan McManus, Councilwoman Claudia Bridges and Councilman James Howard Adams before the 2019 election. The two new planning commissioners, Matt DiTeresa and Beth Bonnar-Kaczmarski, are an administrator and moderator of the group, respectively, and McManus, Adams and Councilman Tracy Folda, who is also a co-founder, are members.

Additionally, Booth said she plans to represent the business community and work with Nevada Rep. Glen Leavitt about making off-highway vehicles street legal. She said they are allowed be driven on some streets in Arizona and Utah, so why not bring that revenue into Nevada?

“You license a moped … what’s the difference in licensing them?” Booth said. “They’re street legal.”

Additionally, she said, it will reduce the number of people cutting through the desert to get places on the OHVs, as well as give tourists more to do when they visit town.

McDonald, who has been a commissioner since 2015, said he is looking forward to spending more time with his family.

He also said that he can’t sit still and plans to continue serving the community in some capacity.

“I’m always happy to serve,” he said. “I don’t have any concrete plans, but nothing is off the table.”

McDonald said he is most proud of working with local businesses and helping find avenues for the city to be friendly to them by being a part of a group of people who knew there were rules and regulations but at the same time were able to flex them as needed to improve economic vitality.

For Booth, she said she is most proud of helping create an ordinance that requires a certain percentage of residents’ yards to be landscaped. Prior to that, it was permissible for homeowners to put gravel in their front yards and park their cars.

“It sounds cheesy, but I will miss being a change for good,” McDonald said. “Whether for an individual or an organization, you know you’ve done something good in someone’s life.”

At the Dec. 18 meeting, McDonald also said that during his time on the commission he sought to have people serve who were different from each other.

“I fought through the City Council for years to adopt people and keep people who actually do have a difference of opinion because I think it’s more important we all come with different backgrounds rather being a bunch of yes men — so at times we may butt heads or vote differently, but I think that’s what Boulder City needs and it’s been wonderful.”

He also had some words of wisdom for the two new commissioners.

“To the folks who’ve been appointed to fill our seats, we wish you the best of luck,” he said. “I challenge you to continue to fight the good fight, but don’t get too comfortable in those seats.”