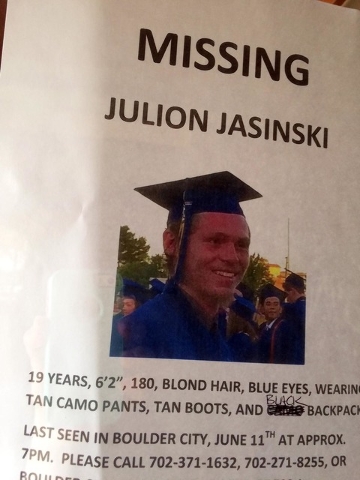 Julion Jasinski, 19, who was last seen on June 11, has still not been found 10 days later.

Jasinski was last seen in Boulder City at 9:45 p.m. on June 11 at the Panda Express on Nevada Highway. According to the Boulder City Police Department, he was seen jumping into a white pickup truck and leaving the area.

Jasinski ran off at 7 p.m. the same night after a fight with a friend, according to his mother, Danni Maxon.

The police department and Jasinski’s family have searched for him in Boulder City for the past 10 days but have been unable track his whereabouts.

According to the family’s missing person flyer, Jasinski is 6 feet 2 inches tall, weighs 180 pounds and has blond hair and blue eyes. He was last seen wearing tan camouflage pants, tan boots and a black backpack.