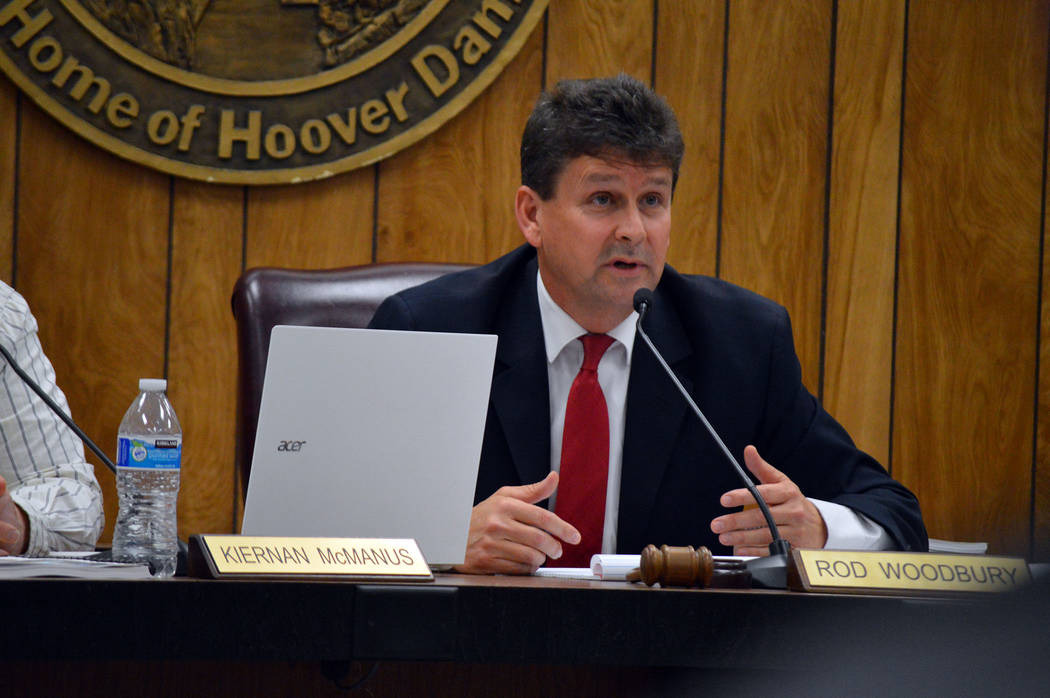 Boulder City is consolidating the management for its two golf courses, unanimously approved a contract allowing Schaper Golf Corp. to oversee both properties.

City Contract Manager Brok Armantrout said the city wanted to consolidate its two contracts to one. He said Andy Schaper of Schaper Golf Corp. approached him and said he wanted to try managing both facilities, including their restaurants.

“I’m really excited to move some of the great things at Boulder Creek to the municipal course. … We have two beautiful facilities and get to show people every day how beautiful Boulder City is,” Schaper told council members.

The new contract is for 10 years at $660,000 annually. That amount will go up between 2 percent and 4 percent each year based on the reported Southwest region’s consumer price index that comes out in September.

Schaper will be responsible for merchandising, including all items sold at the courses, along with food purchases and sales. The city will receive 8 percent of gross sales.

The contract also includes two five-year extension options that can only be exercised if both parties agree to it, as well as a termination for convenience clause, allowing either party to end the contract for convenience with a 90-day written notice.

Councilman Kiernan McManus said after he had talked to Schaper he did not think people realized how successful he was at getting good tournaments at the Boulder Creek Golf Club.

“I would like to see us get that word out a little more,” he said.

Councilman Rich Shuman thanked Fiorintini for his work at the municipal course.

“He deserves a lot of credit with building the foundation of golf in Boulder City,” he said.

Additionally, Shuman said Schaper had done a good job at the Boulder Creek Golf Club and said he couldn’t think of a better guy to run both courses.

Councilman Peggy Leavitt thanked Schaper for reaching out individually to all the council members and said she was impressed with the contract.

“I like that it’s uniform now between the two courses,” she said.

The new contract will start Jan. 1.

Also at Tuesday’s meeting, council approved moving forward with the city’s capital improvement plan in a 4-1 vote, with McManus voting against it.

The plan is for the next five fiscal years and includes 154 projects. Staff was requesting council approve the first year of projects, which totals approximately $33.9 million.

McManus said he wanted more time to review the document because he thought the original timeline allowed for it. When the plan was initially presented, staff wanted to have council approve it on or before Dec. 11.

Finance Director Diane Pelletier said there really haven’t been any changes to the document and it can be amended in the future.

McManus also requested that funds coming into the city from other sources like the Regional Transportation Commission of Southern Nevada be shown for each item.

“It’s a vast improvement over what we’ve seen in the past,” he said about the plan.

Leavitt agreed that the plan was better than in previous years.

“In my time on the council this is the soonest the CIP has been done,” she said.

Woodbury thanked the staff for their hard work and completing the project earlier than expected.

“You really have a gift, I think, for making things short and concise,” he told Pelletier.

He also said the project is fluid and council can revisit it if changes need to be made.

■ Approved an amendment to the city code that established minimum financial reserves of 20 percent for all the city’s funds, not just the general fund. Additionally, it set aside money in an emergency reserve in case of a catastrophic event.

■ Approved a nonexclusive easement with DesertLink LLC for a transmission line from the Harry S. Allen substation to the Eldorado Substation. DesertLink will pay the city $66,000 each year for the easement. That amount will escalate 3 percent annually starting Jan. 1, 2020, for the life of the easement.

■ Reappointed Randy Schams to the Combined Board of Appeals in a vote of 4- 1. McManus voted against the reappointment.