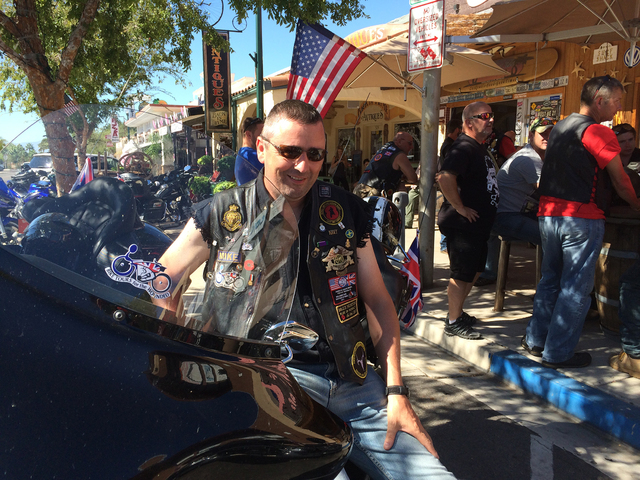 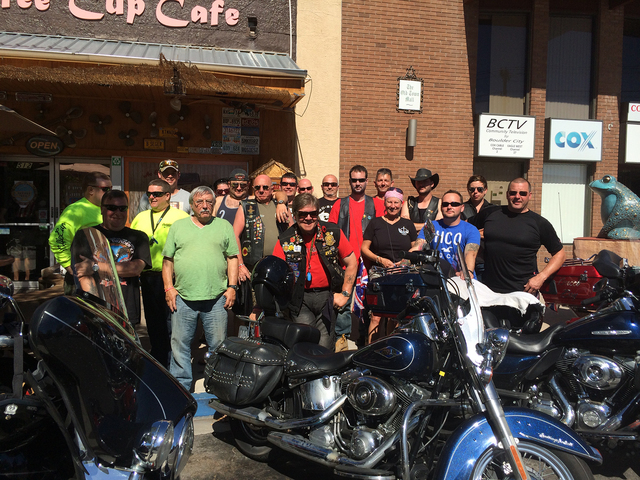 Traveling along Route 66 can be a life-changing experience. It’s the Mother Road, one of the first highways built in the United States and passes by some of the nation’s most recognized landmarks.

But is is more than just a road, especially for the approximately two dozen motorcycle riders and passengers of Bike Tours for the Wounded from the United Kingdom.

The group, which stopped in Boulder City last Thursday for breakfast at the World Famous Coffee Cup, returns today with a new group as part of the back-to-back nine-day tours.

Al Stevens, owner of the Cup, said he was introduced to the group about three years ago. One of the ride’s organizers called him to make arrangements for the group to stop by for breakfast and help set up the route.

“We struck up a rapport,” Stevens said, adding that he and his son have even joined the riders on their journey to Williams, Ariz.

The group has been visiting ever since.

“It’s my favorite place on the tour to eat,” said Mark Lamplough, who runs the tours along with Darren Clover.

Lamplough said Bike Tours for the Wounded visits the United States twice a year, each with two tours. They start in San Diego and travel through Arizona and Nevada before heading to Los Angeles, where they turn around and do the route in reverse.

The warriors, or pillions (the British term for the seats passengers sit on), have a variety of injuries, ranging from limb amputations to burn scars to post-traumatic stress disorder. Lamplough said anyone who has had a career-changing injury or disorder who served or is serving in the British army, navy or air force qualifies for the free trip. Riders pay their way, and the majority are veterans who want to give something back.

Among the warriors they have brought on trips were two people with cancer, who “are no longer with us,” Lamplough said.

According to Lamplough, PTSD is typically the more difficult injury to deal with.

“Amputees are easier to deal with; they know they are not getting their leg back,” he said.

Mike Hemming, who was making his third trip with the group and planned to stay for his fourth trip, talked about one warrior on the trip who was suffering from the disorder.

According to Hemming, the man was in tears when he first arrived for his tour. “Two days ago he was on a stage singing.”

Another man had not left his home for four weeks before leaving for a bike tour. When he returned home, his wife asked what happened to her husband because he was like a new man.

“He never returned home from America,” Lamplough said adding that the man is coming back as a rider.

The bike tours also help instill a greater sense of independence for the wounded warriors, Hemming said. The amputees who have wheelchairs refuse to use them, except to transport their luggage.

“They are so bloody independent, especially the amputees,” Lamplough said.

As a result of these dramatic changes, Lamplough said they are able to go to personal rehabilitation units and convince officials that the bike tours are not just “a vacation in Las Vegas. They really help with recovery.”

“Seeing the difference in the wounded guys from Day One to Day Eight” is what keeps Hemming involved.

After taking his first trip last May, Hemming, who has two home- and kitchen-renovating businesses, returned for the September trip and joined the organization’s board of directors. And he’s already agreed to return in May.

“It’s what we do for these guys that keeps them (riders) coming back,” Lamplough said.

The need for the trips continues to increase as for every one service person killed another 16 are injured, Lamplough said.

Hemming added that statistics also are showing that more servicemen and veterans suffering from PTSD are committing suicide than being killed in combat.

For more information about Biker Tours for the Wounded, visit www.bt4tw.co.uk.