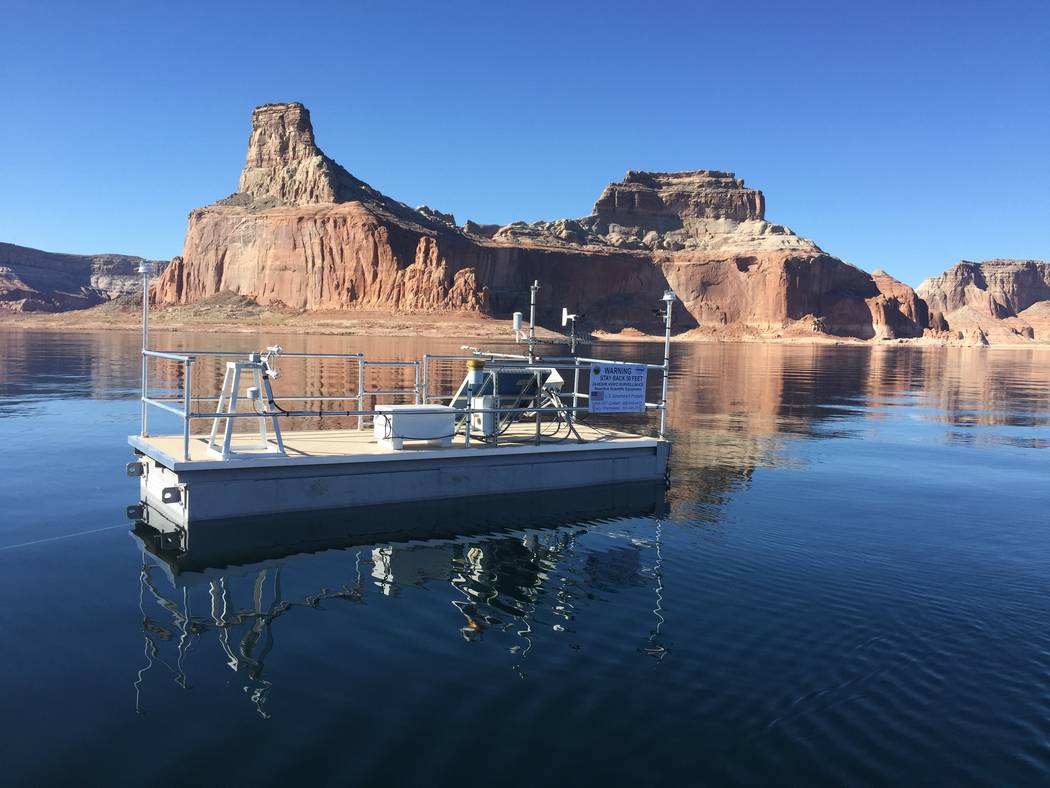 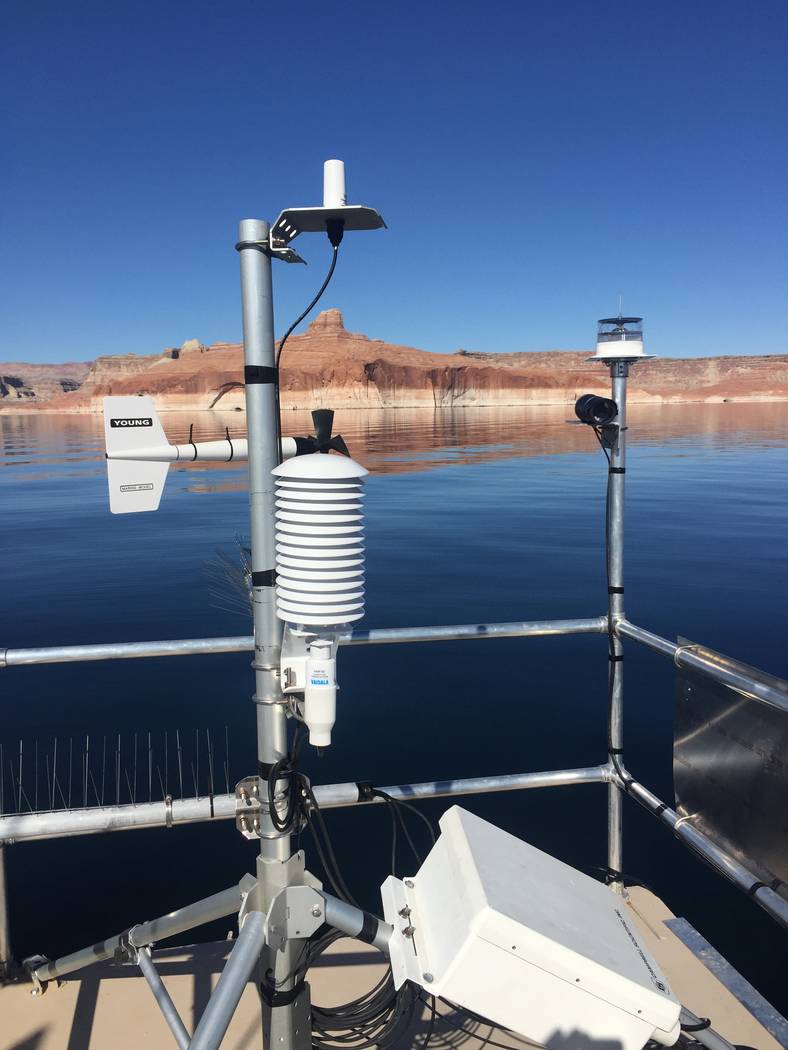 (Desert Research Institute) Instruments on a floating platform at Lake Powell will spend the next two to three years collecting data on water temperature, weather conditions and other variables used to estimate evaporation. 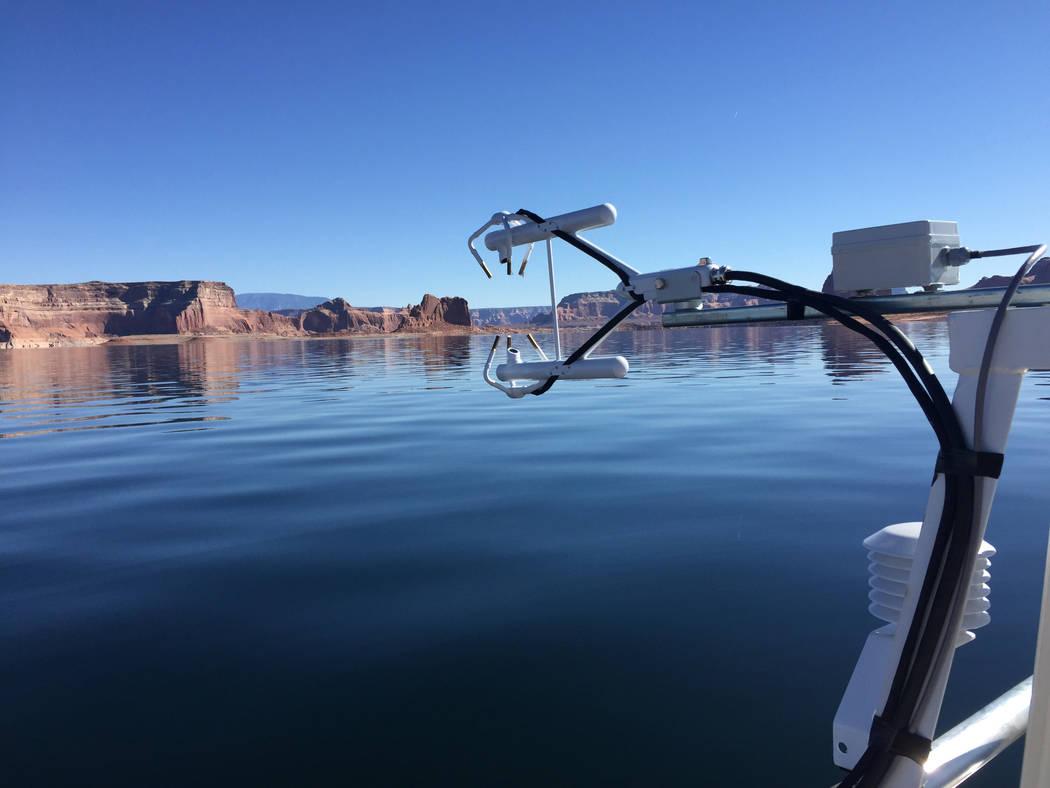 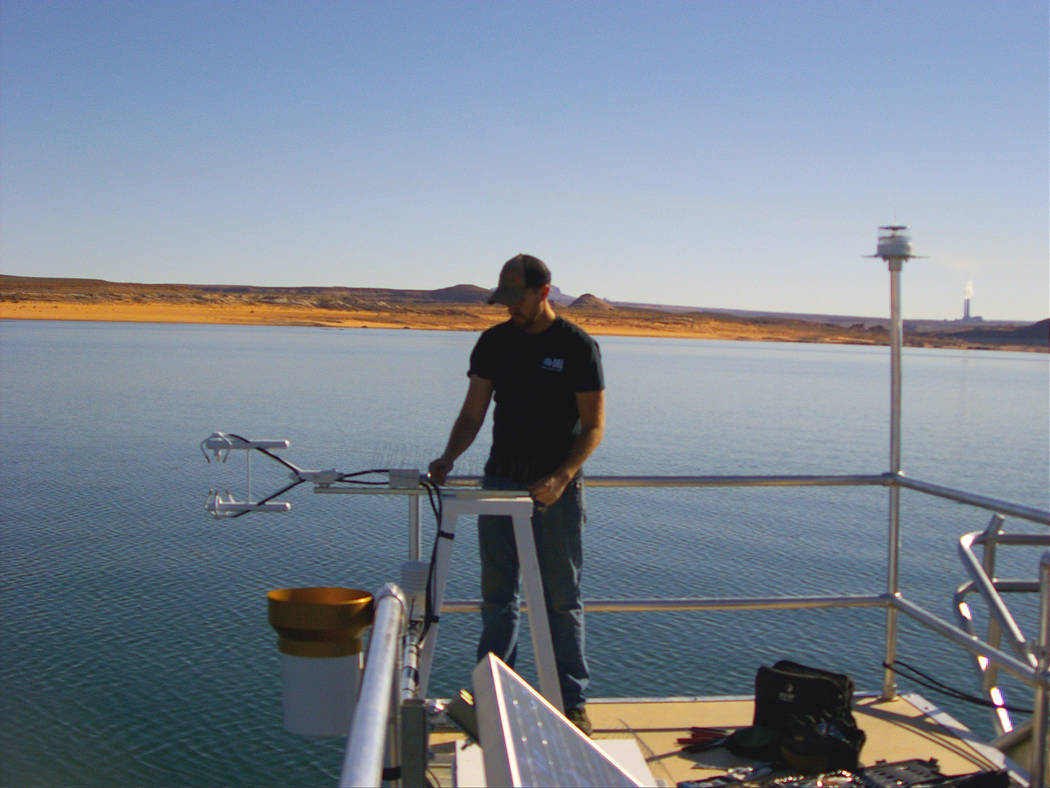 (Chris Pearson/Desert Research Institute) A researcher adjusts equipment during installation of a floating evaporation station at Lake Powell on Nov. 7, 2018.

Precious water is vanishing into thin air at the Colorado River’s two largest reservoirs, and scientists are only now learning the true scale of the problem.

Building on ongoing research at Lake Mead, the U.S. Bureau of Reclamation and Nevada’s Desert Research Institute have teamed on a new study using remote sensors on floating platforms at Lake Powell to pinpoint how much water is lost to evaporation.

“It’s a difficult number to measure,” said Chris Pearson, assistant research scientist of hydrology at the institute in Reno. “It’s not just a Lake Powell problem. It’s a science problem.”

Pearson and the rest of the team began receiving real-time data in November from two floating evaporation stations they deployed in different parts of the lake. The platforms are equipped with instruments for measuring water temperature, weather conditions and other variables used to estimate evaporation in a variety of ways.

During the next two to three years, the researchers hope to collect enough data to not only produce a more accurate evaporation estimate for the reservoir but also help determine the best method for measuring rates elsewhere.

Leading the study alongside Pearson is Jed Parker, a hydrologic engineer with the Bureau of Reclamation in Salt Lake City. He said the current method of estimating evaporative losses at Lake Powell has been in use for roughly 40 years and is “not considered very representative” of what’s really happening on the reservoir.

Researchers are testing a new technique known as eddy covariance to see if it can produce more accurate, real-time measurements.

Pearson said the old way of estimating evaporation could be off by 20 percent or 30 percent from reality. That’s significant in a lake as big as Powell, where even a 1-foot change in the water level represents a difference of tens of billions of gallons.

“I’d say the current estimates have a lot of uncertainty in them,” he said.

Last year, evaporative losses at Lake Powell were estimated at about 386,000 acre-feet using the old calculation. That’s roughly 30 percent more water than Nevada is allowed to take from the Colorado River each year.

Evaporative loss estimates for Lake Mead range from about 600,000 acre-feet to as much as 875,000 acre-feet annually. One acre-foot is enough water to supply two average Las Vegas Valley homes for just over a year.

Local residents rely on the Colorado their water supply, but two decades of record drought have sapped the overtaxed river. The water level in Lake Mead is now about 130 feet lower than it was in 2000, and combined storage in Lakes Mead and Powell has slipped below 45 percent.

Though there’s really nothing water managers can do to stop evaporation from such large bodies of water, Parker said more accurate measurements should lead to better water budgeting and more certainty on the river, which supplies water to some 40 million people in seven Western states.

“That’s why we’re spending the money and trying to refine the method,” he said.

The U.S. Geological Survey launched a similar study at Lake Mead in 2010. During the first few years, researchers recorded significant differences between their measurements and the bureau’s projections for the lake. Observed evaporation was 4.5 percent higher than the official estimate in the first year and 5.3 percent lower than the official estimate in the second year.

The research at Lake Mead also suggests that the bureau dramatically overestimates evaporation in July and August and underestimates it in October and November, when latent heat stored in the reservoir is released.

Parker and Pearson anticipate the same sort of thing at Lake Powell.

The Bureau of Reclamation is paying for the ongoing study, which has a projected cost of about $670,000.

Accounting for every drop of water in the system has never been more important, as river users prepare to take voluntary cuts under an interstate drought agreement recently approved by Congress.

Then there is climate change, which scientists warn could further diminish the Colorado by raising temperatures and increasing evaporation.

In the long run, Pearson said, access to accurate, real-time data might lead to new management strategies designed to minimize evaporative losses by moving water around and storing it in different places at different times of the year.

“But that’s really far down the road,” he said.