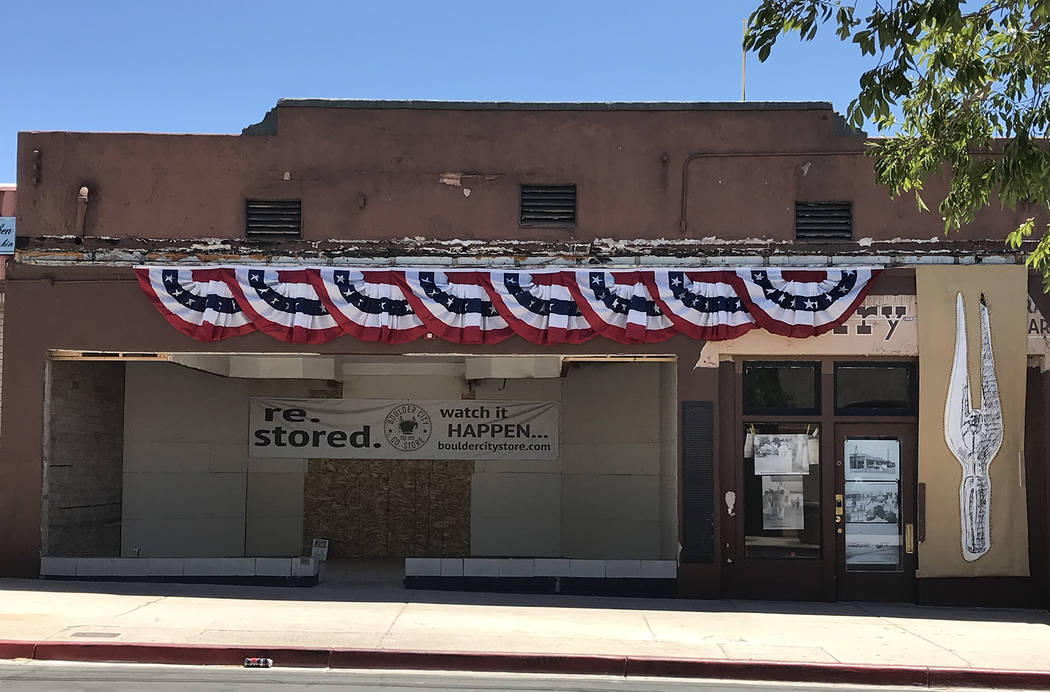 (Hali Bernstein Saylor/Boulder City Review) Tara and Troy Bertoli, owners of a Boulderite Holdings LLC, received a $27,458 grant from the city’s redevelopment agency Tuesday, July 9, to remodel and convert the former Antique Depot at 525 Avenue B into the Boulder City Co. Store.

At its meeting Tuesday, July 9, the board approved a $27,458 grant for Boulderite Holdings LLC to remodel and convert the former Antique Depot at 525 Avenue B into the Boulder City Co. Store

The renovations include restoring the storefront to the original men’s store, exterior paint, making it compliant with federal American with Disabilities Act guidelines and new storefront glass and signage.

Owners Tara and Troy Bertoli are designing the store to be like it was in the 1930s when it was operated by Six Companies for Hoover Dam employees.

It will feature Boulder City-branded items that are similar to products used in the city’s early days, such as tin coffee cups and Mason jars. Also, logos and images that Tara Bertoli researched in the Boulder City/Hoover Dam Museum will be featured on T-shirts, hats, towels, blankets and more.

According to RDA documents, Boulderite Holdings LLC’s total investment for the project is approximately $82,000.

Raffi Festekjian, the city’s economic development coordinator, said the RDA fund has $180,000 in it this fiscal year and no money has been disbursed.

Board member James Howard Adams said he was happy to see the storefront return to its historical roots.

According to documents in the RDA meeting packet, owner Dawn Wengert is seeking the funds to remove and replace existing cracked asphalt at the front entrance with concrete, which will help improve the aesthetics of the business and surrounding area.

The RDA board consists of City Council members.