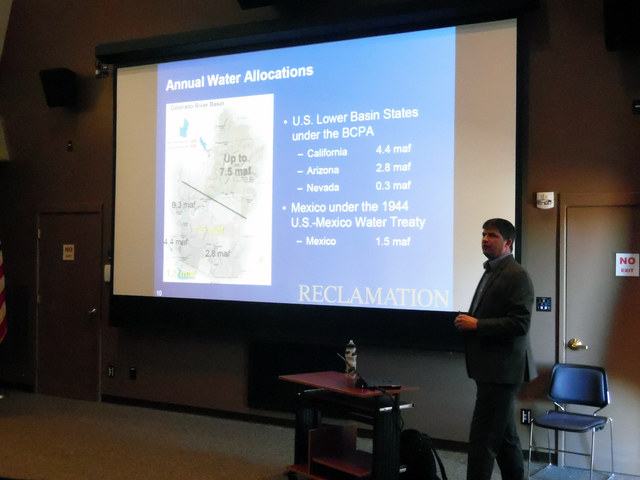 Climate change and sustainable energy were in the forefront Saturday at Lake Mead National Recreation Area as rangers and local experts came together for a presentation focused on exploring the evolving environment and energy needs in the Southwest.

Daniel Bunk of the Bureau of Reclamation spoke about the drought that has been plaguing the region since 2000 and discussed the impact it has had on Lake Mead, as well as the Colorado River.

The Colorado River delivers water to seven states, from Wyoming to Arizona, as well as Mexico, and because of the drought, in order to meet that demand, the lake is losing between 12-14 feet per year, according to Bunk. Lake Powell, which straddles the border between Utah and Arizona, acts as a buffer, but Lake Mead is still losing 3-4 feet per year and is less than 10 feet above shortage levels, he said.

“I hope people leave with an understanding of why Lake Mead had been declining and the seriousness of the drought as well as what we’re actually doing to find solutions,” Bunk said.

Sky McClain, an interpretive specialist at Lake Mead, said a major goal of the day was to emphasize the power of energy and the forces of nature that shape the country. In addition, water is tightly linked to any discussion about the changing climate as well as energy production, the lake and the dam.

“I thought it made sense to engage the local university and feature local specialists who can really talk about these issues in depth,” McClain said. “I hope people can take away a role they can play in the use of water and energy. There are things we can do on a personal level to reduce our impact and respect our resources.”

Johnny Faerber stays on the lake during the winter and came to learn more about the lake and the looming possibility of a water shortage.

“I thought it was really interesting,” Faerber said. “Everybody’s talking about how we’re low on water, but I think the problem is the demand. There’s just so many people in need of it. Water is life, more precious than gold. If we run out of water, we can’t make more water.”

According to Rhee, the panel was a great opportunity to speak with the public about the effects of climate change and the renewable energy options available to the state.

It’s a difficult prospect, weaning off of carbon in a fossil fuel-dependent society, according to Rhee, but there are things we can do to make then change, and we don’t really have a choice.