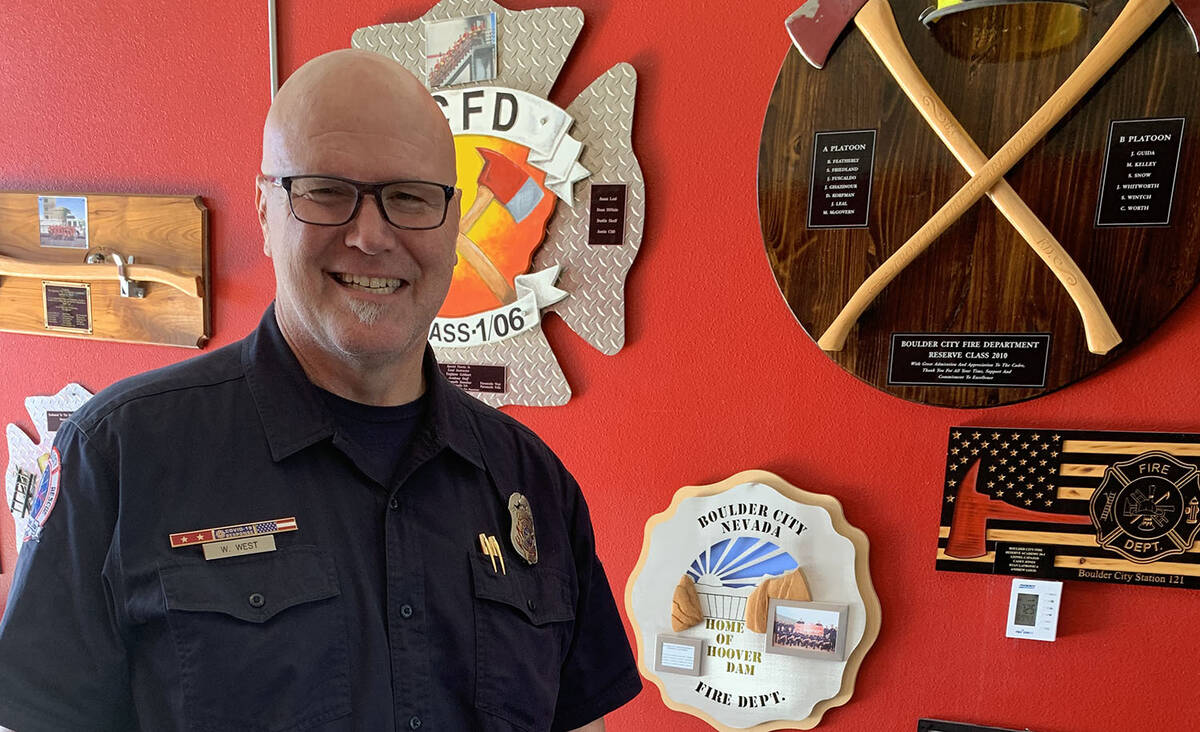 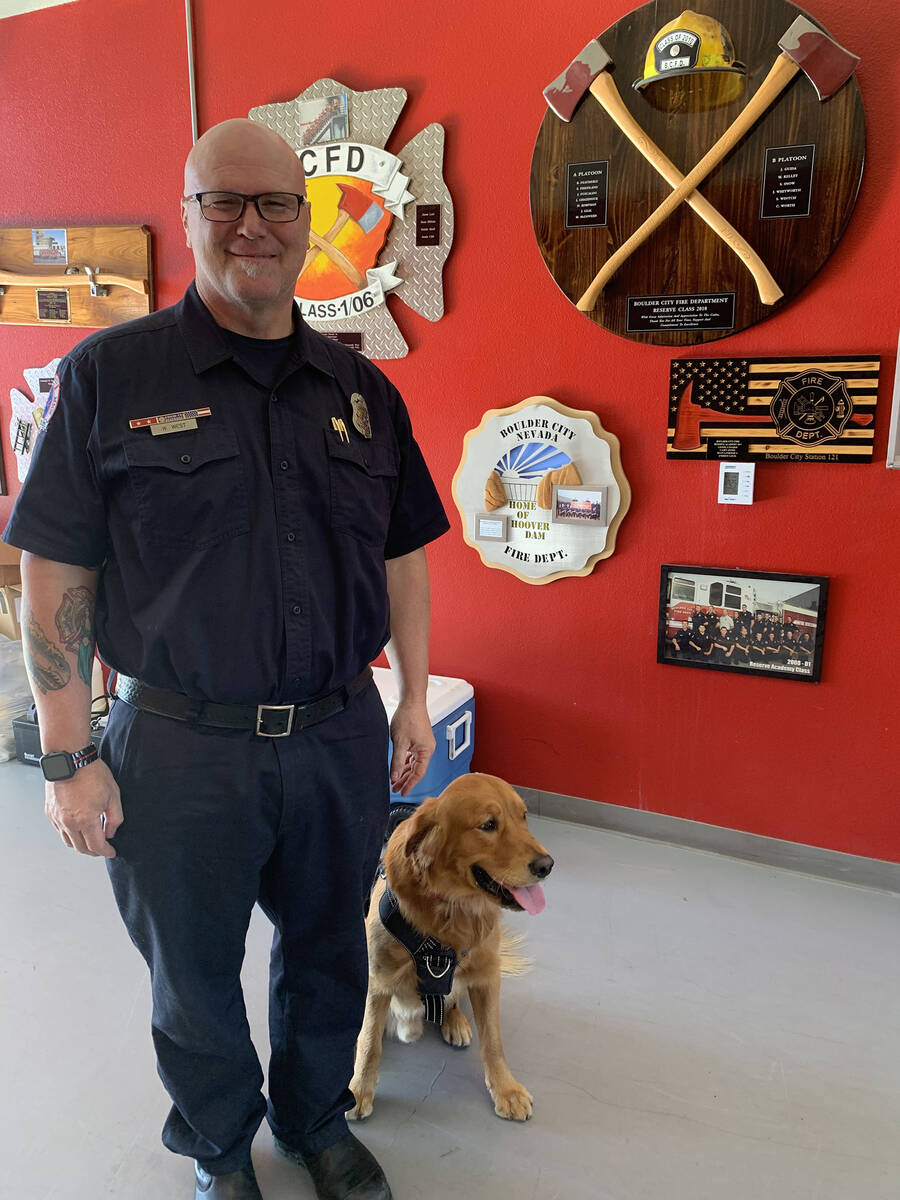 That sentiment expressed by cartoonist Charles M. Schulz is just as true today as it was on April 25, 1960, when it first appeared in the comic strip “Peanuts.”

And the firefighters, paramedics and reservists who work at the Boulder City Fire Department would be among the first to agree.

Earlier this year, Ryno, a golden retriever, came to live at the station whenever his owner/handler Walt West is on duty.

But more than just bringing happiness, Ryno is a certified therapy dog whose presence helps reduce stress and anxiety among the firefighters and paramedics.

Stress is a serious issue and mental health issues have been overlooked in the fire service, said Boulder City Fire Department Chief Will Gray.

“Firefighters across the country have seen an uptick in (post-traumatic stress disorder) and suicide.”

In 2021, the Federal Emergency Management Agency presented a report about the rate of firefighter suicides, noting that only six on-duty firefighter deaths have been reported by the United States Fire Administration since the Firefighter Fatality Program began in the 1970s. It also notes that other organizations report that there are around 100 firefighter suicides each year and that the national program is greatly underreporting the number.

According to the CDC, first responders, including firefighters and paramedics, are at increased risk for suicide because of their work environment. The stress they feel can come from a specific incident or accumulated over time.

“Occupational stress in first responders is associated with increased risk of mental health issues, including hopelessness, anxiety, depression, post-traumatic stress, as well as suicidal behaviors … . Even during routine shifts, first responders can experience stress due to the uncertainty in each situation. During emergencies, disasters, pandemics, and other crises, stress among first responders can be magnified,” it writes on its website.

“The goal of this program is to help offer a soothing presence when firefighters return from a difficult incident,” Gray said. “Research seems to point to these dogs being able to recognize a difference in the firefighters.”

According to the Alliance of Therapy Dogs, having a therapy dog at a fire station allows the staff to relax and decompress from the tragedies and rigors of their job.

The alliance cites studies that show interaction with therapy dogs has mental and physical health benefits including the release of hormones that help elevate moods, lower anxiety, reduce loneliness and slow breathing.

Additionally, it cites a study by the American Journal of Critical Care that shows that 12 minutes with a therapy dog provided greater neurological and psychosocial improvements in heart patients than a 12-minute visit with a person.

West said petting a dog releases serotonin, which plays a key role in mood regulation, sleep and digestion; dopamine, which makes a person feel good; and oxytocin, which helps strengthen bonds and feelings of love.

“Dogs are the best part of us and have none of the bad,” West said.

Ryno is making a difference. It can be seen on the faces in the pictures that West has on his cellphone.

“… the firefighters seem to enjoy having him there much like people do with their pets at home. He is a big presence at the station, and they treat him like part of the crew,” he said, adding that Ryno hasn’t been at the station long enough to get quantifiable data about how staff benefits from him.

Until more information about how having a therapy dog at the station is obtained, there are no plans to add additional dogs to cover the shifts when West is not working, Gray said.

“This is a program we will watch closely and determine if it should grow, stay the same or be eliminated in the future.”

West said he had been wanting to bring a therapy dog to the station for several years, but was delayed because of the pandemic and finding a permanent replacement for former chief Kevin Nicholson, who resigned suddenly in September 2019.

He had spoken to several other fire departments about their therapy dogs and modeled Boulder City’s program after the one in Colorado Springs, Colorado.

He began training in October and completed it in April, going through basic and advanced obedience as well as becoming a canine good citizen.

Ryno’s role as a therapy dog is primarily for the firefighters and paramedics. He stays at the station when they are out on a call.

“He has a bed and a kennel that he goes and lays in. I have seen him a time or two waiting in one of the recliners for the crew to return,” Gray said.

That doesn’t mean he is without friends outside the station. West has a TikTok account dedicated to Ryno that has more than 5,000 followers. He also takes him to the Southern Nevada State Veterans Home, Boulder City Hospital, area schools and the library, where he participates in a reading with children program.

Like the police department’s mounted unit, all of the expenses to care and train Ryno are West’s responsibility. However, the fire department does have a donation account to help with those costs.

Anyone wishing to help can send donations to the fire department, with a notation of “Ryno Care.”

Gray said the “funds will be transferred into the appropriate account and used exclusively to care for him.”

If you’re thinking about suicide, or are worried about a friend or loved one, help is available 24/7 by calling or texting the Lifeline network at 988. Live chat is available at 988lifeline.org.