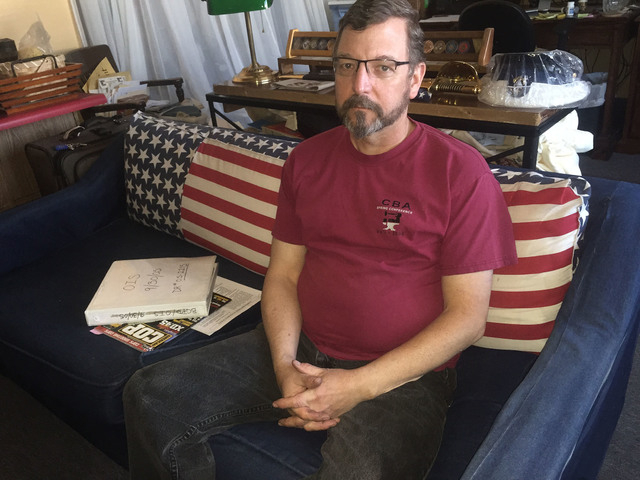 Mike Barth knew that something was off about that red Pontiac Grand Am he pulled over on Nevada Way, a few yards away from the Boulder Inn & Suites.

It was a Friday night — Sept. 30, 2005. Quiet Boulder City was bustling with people for the Art in the Park weekend. The homecoming football game was being played less than a mile away.

The passenger of the Grand Am, 32-year-old Jeffrey Dean Martindale, was overly nice when Barth, a five-year veteran of the Boulder City Police Department, started talking to him. He immediately noticed a large, blue tattoo on Martindale’s chest, which he described as a “prison-type” tattoo.

Barth then asked the female driver for her license, registration and proof of insurance. She already had it in her hand, he said, another indicator that something wasn’t right. After the two began telling him different stories as to why they were in Boulder City, Barth asked Martindale for his identification.

Martindale told Barth he did not have any, and he didn’t know his Social Security number.

Sensing that something was wrong, Barth went back to his patrol car, ran the information through dispatch, and asked for backup when Martindale’s information didn’t come back.

Barth said it only took his fellow officers a couple of minutes to arrive, although it felt like an hour. Shortly after arriving, he told officer Scott Pastore to have Martindale step out of the vehicle.

The situation quickly went from bad to worse.

“At that time, I really did not think gun,” Barth said, putting emphasis on the words “did not.” “I thought drugs. I thought warrants. I thought other things, but I never thought gun. Never even crossed my mind at that particular moment.”

Martindale, who was 5 foot 10 inches and weighed 200 pounds, then got out of his car, brandished a handgun and told the officers to get back. A struggle ensued, and shots were fired.

“It happened in about 10 seconds, just in the blink of an eye,” Barth said.

Barth, along with officer Mike Daniel, returned fire and shot Martindale three times. Barth’s police car and Daniel’s flashlight case were hit in the crossfire, although all three officers escaped without serious injury.

Martindale, a white supremacist from Pahrump on the lam for attempted murder, was airlifted to University Medical Center where he later died.

Thankful to be alive, Barth said his brain was running 100 mph when it all went down.

“Your first thought is, ‘Wow, what just happened?’ And then you’re elated that you’re alive,” he said. “You get this huge adrenaline rush, because it’s fight or flight. And, of course, it’s fight, because cops are the ones who willingly run into bad situations instead of running away.”

But the effects of the shooting took their toll on Barth. He experienced physical reactions, including insomnia, fatigue, hyperactivity and headaches. He also went through an emotional roller coaster where he experienced flashbacks, excessive jumpiness, irritability and anger.

The symptoms he experienced are all too common for police officers involved in shootings, according to the U.S. Justice Department, and when Barth heard about the police shooting on March 29, his mind immediately went back to that fateful night.

On March 29, Boulder City police officers Alan Nutzman and Armando Salazar shot and killed 54-year-old John Allen after he fired at them outside his apartment.

Barth said he didn’t know much about the March 29 shooting, Boulder City’s first officer-involved shooting since 2005, but he wondered how the officers were coping with it.

“You really feel for the officers because it’s such a tragic event to have to take a life like that,” he said. “At first you don’t want to talk about it. You don’t want to do anything. I wouldn’t have had this conversation five years ago. No way. It took me a couple of years after I left law enforcement to kind of get normal again.”

Barth, who left department in 2009, said it’s important not to rush Nutzman and Salazar back to work.

“They need time to heal. We got counseling, and these officers are going to get counseling,” he said.

Police Chief Bill Conger, who worked as a supervisor with Las Vegas police from 1982 to 2005, said support is the key to improving the situation.

“Our focus is to get our officers back to work where they can put it behind them the best they can,” Conger said. “The biggest key is the support of the department. It’s officers supporting each other in these events. Our job as a police department is to support them and give them the resources they need.”

While in counseling, Barth said he learned that the brain can’t comprehend certain details during a traumatic event. He found out it could take days, weeks or even years to remember different pieces of his shooting.

It wasn’t until about two years ago, eight years after the shooting, where he was finally able to remember everything. Even now, watching scenes and hearing sounds from the TV show “Blue Bloods” takes him back to that night.

It’s part of the reason why he’s kept all the paperwork related to the shooting. In a thick binder, Barth has saved everything from autopsy photos and personal files of Martindale, to different articles written about the shooting.

He still has the dash cam video on his laptop. He’s watched it countless times.

He doesn’t keep it as a form of torture, constantly reminding himself of a night that could’ve resulted in the loss of his own life instead of Martindale’s. He uses it as a coping mechanism, showing it to those who have dealt with similar situations, sharing a bond with one of his own, albeit through a life-or-death situation.

He shows it all to up-and-coming officers in the academy, allowing them a chance to see how to properly handle the situation if they ever experience one.

That’s why he got into law enforcement in the first place.

“It’s really to help the officers,” he said. “I’d explain it to them, and what I thought was … if there’s one thing they remember on one stop that saves their lives, then it’s all worth it.”