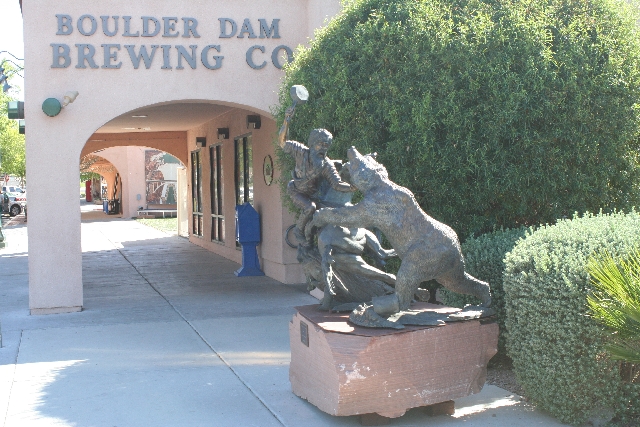 No, you’re not crazy. That statue on the corner you just noticed has not always been there.

The sculptures were installed in conjunction with the nonprofit Art Scape’s seventh annual art walk and reception Saturday at the Boulder Dam Hotel.

The event includes an award ceremony for the pieces of public art that are sold or returned to the artist after a year of display, and also a walking tour of the newly installed pieces.

However, “People were very complimentary of the statues that came in this year,” she said.

Every year Art Scape takes, on loan, about a dozen pieces of public art and displays them throughout downtown. The artists are paid a $400 honorarium for the use of their art.

In seven years, 32 artists have exhibited here. About half have been from Southern Nevada, but they’ve come from as far away as Georgia, Burk said.

Several artists have exhibited multiple years, but Henderson resident John Banks, whose piece “Star of Dancing Triangles” is near the Brewing Co., is the only artist who has exhibited for seven years.

“It’s been great. It’s given me an incentive to do new stuff every year,” he said.

Every May, pieces can be purchased at the reception.

Often, the pieces are purchased by private buyers and donated to Art Scape, which in turn donates the pieces to the city for permanent display.

“It’s not costing the city anything, its just helping to beautify the city,” Burk said.

A benefit of donating pieces is that Art Scape does not have to carry insurance on them, as it does with the loaned pieces, Burk said.

Burk said Art Scape also purchases pieces itself, when it can afford to. This year it purchased “Second Love of a Child,” located near Wells Fargo.

Art Scape operates through donations and fundraisers, and by keeping a percentage of the sale prices.

The main fundraiser is Taste for the Arts, an auction in November, Burk said.