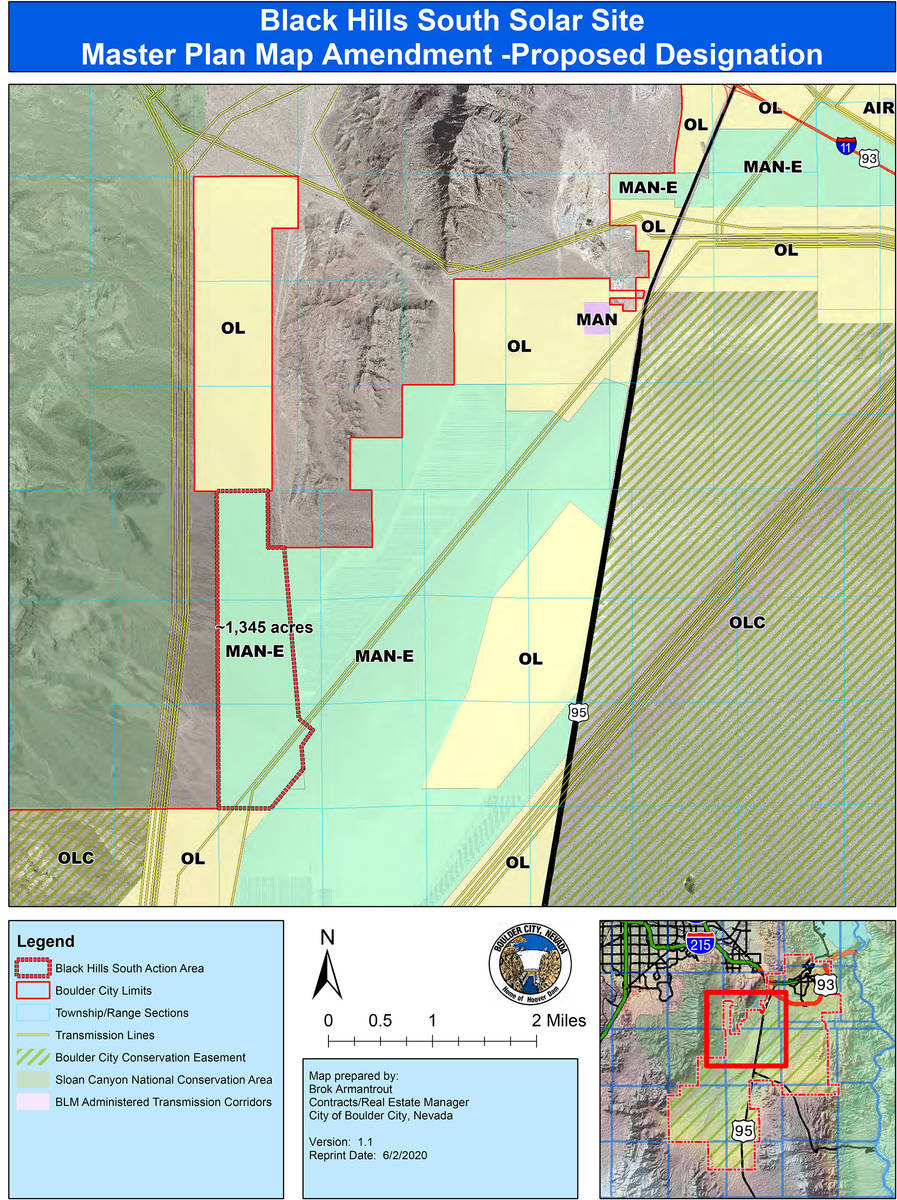 Boulder City Planning commissioners are recommending the future land use for a 1,345 parcel of land in the Eldorado Valley be changed from open lands to manufacturing-energy. It will allow for a new solar development site, Boulder Flats. The parcel is the one surrounded by dotted red lines.

Another solar development project could be coming to the Eldorado Valley after the Planning Commission approved recommending amendments to the city’s master plan and zoning map.

The proposed area is approximately 1,345 acres of land west of U.S. Highway 95, which is currently zoned government open space. The city has a pending option/lease agreement for the parcel, Black Hills South/Boulder Flats, to allow utility-scale solar energy development.

At the regular June 18 Planning Commission meeting, Commissioner Paul Matuska asked how this portion of land being used for solar development would affect off-road vehicle usage.

“I’m just wondering, has the off-road community been contacted in any way specifically as this appears to really start to cut into or maybe terminate access down that valley that … begins at Dutchman’s Pass?” he asked.

Brok Armantrout, Boulder City’s contracts/real estate manager, said it would not impact off-road vehicles because the primary access road has to be there due to easement agreements.

“The primary access road that goes through Dutchman’s Pass won’t be affected,” he said. “That will always remain open because it has to. It’s also the gas line service road.”

Commissioner Ernest Biacsi said he was supportive of the project but was concerned they were still choosing to “piece-meal the master plan.”

“We’re coming in with an amendment, taking out a piece of it and just by virtue of the participation we’re having here … . The community is not aware of what’s going on,” he said. “Again, I support it. It’s a great approach, but what I don’t support is coming in with pieces of an amendment and we don’t involve the community.”

The commissioners unanimously approved recommending the amendments to City Council. They will be introduced at the July 14 meeting and a public hearing will be held Aug. 11.