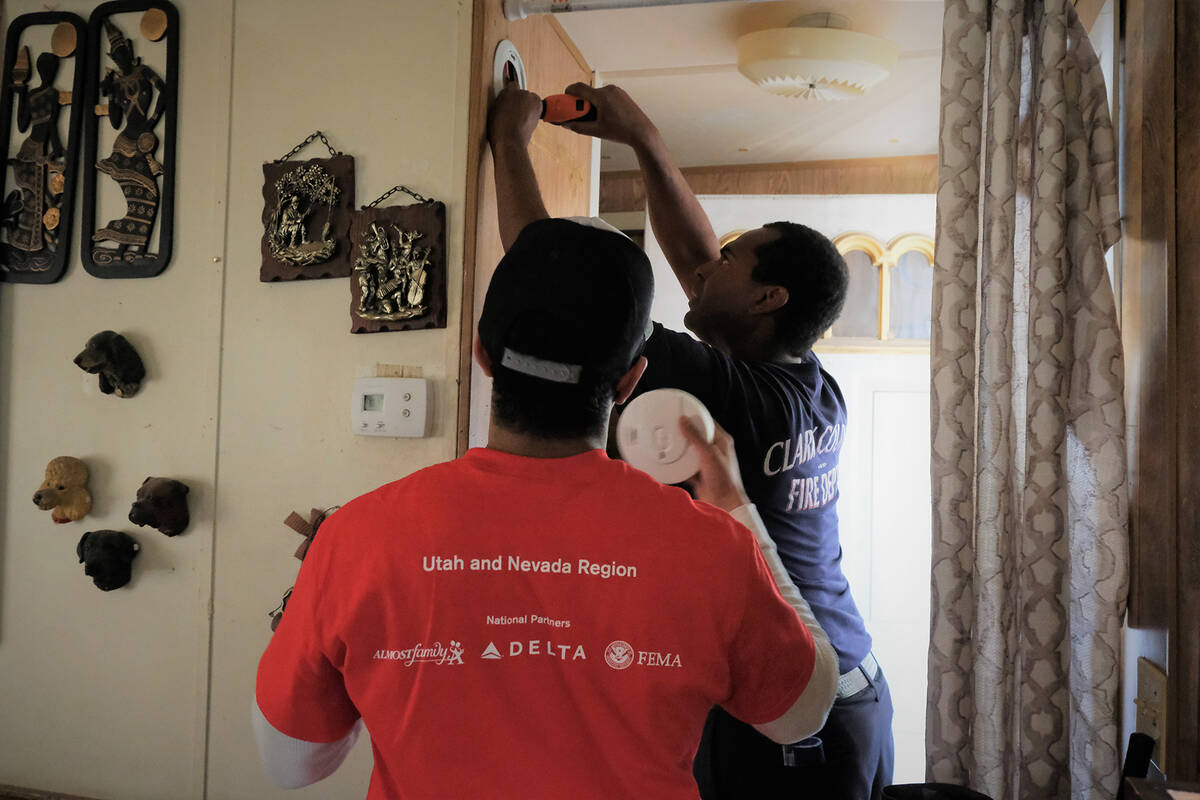 (Photo courtesy Southern Nevada Red Cross) Sound the Alarm is a program sponsored by the American Red Cross that installs free smoke detectors in homes of those in need. More than 100 will be installed in Boulder City homes that were built in the 1930s on Saturday, Oct. 15, 2022.

On Saturday, the more than 100 alarms are scheduled to be installed in about 25 homes that were built in the 1930s and don’t have fire alarms.

“This event impacts the area of Boulder City to ensure early detection abilities and overall knowledge in case of a fire,” said Rachel Flanigan, executive director of the Southern Nevada Red Cross chapter.

The Red Cross will also educate residents on emergency evacuation plans, based on the structure of their home, during the Sound the Alarm event, according to Flanigan.

Additionally, volunteers will help test existing smoke alarms and change out batteries, said a representative from the Rotary club.

The fire alarms were donated to the American Red Cross primarily by the Boulder City Fire Department, Flanigan said.

The Rotary club is one of many of the organization’s nationwide partners. Club members visited 50 homes to help determine the need for smoke alarms and/or their installation.

“We don’t want people that shouldn’t be on a ladder, on a ladder,” Flanigan, 41, said. “Sometimes these homes are low income, have seniors, or even overwhelmed (residents) that can’t get to (installing fire alarms).”

“We had a family in Southern Nevada that recently had a fire,” she said. “The smoke alarms went off and they were able to save six lives.”

The American Red Cross had recently installed the alarms, according to Flanigan.

“We respond to fires every 18 hours,” she said. “If we can reduce the poor outcomes, that’s all we want.”

When fire alarms are installed, residents are alerted by the danger and can get to safety faster.

“Last year in Clark County, Red Cross staff and volunteers helped more than 1,200 people whose homes were destroyed or damaged by fire,” said Flanigan. “Most people don’t realize they only have two minutes to escape a home fire or that smoke alarms need to be replaced every 10 years. Taking action with this knowledge can be the difference between survival and tragedy.”

A home should have at least three alarms: in the kitchen, living area and hallway, according to Flanigan. If a smoke alarm is yellow it needs to be replaced.

Sound the Alarm events such as the one on Saturday are an important part of the Red Cross’ Home Fire campaign. Since 2014, the Red Cross has worked with community partners to save more than 1,300 lives nationwide by educating families about fire safety, helping them create escape plans and installing free smoke alarms.

In addition to helping with home fires, the Red Cross’s Disaster Team offers assistance in the case of earthquakes, floods and plane crashes, Flanigan said.

Those who missed this week’s installation event, can still request assistance and a free smoke detector at Soundthealarm.org/nevada or at 702-697-1707. On the website there is also a link for Spanish speakers.

Anyone who would like to assist with the project can meet from 8 a.m. to noon in the parking lot of The Tap, 704 Nevada Way.