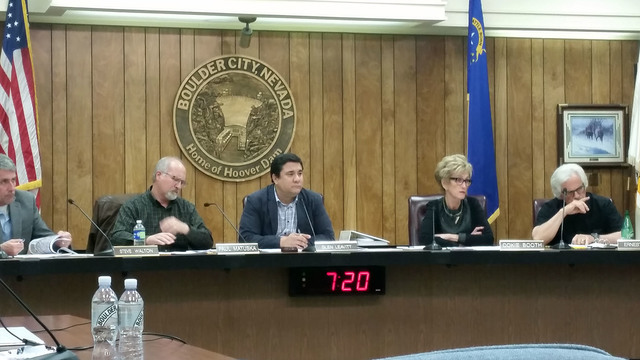 Boulder City’s zoning ordinance could be changing, as the Planning Commission is recommending a new research and development zone for approximately 50 acres of city-owned land in the Eldorado Valley.

The land is currently zoned government open space and is part of the approved drone test range on city-owned land.

According to City Planner Susan Danielewicz, in 2013 the Federal Aviation Administration designated Nevada as one of six states authorized to test commercial drone technology and Boulder City as one of three cities approved for it within the state.

In 2016, Boulder City partnered with The Aerodrome LLC to develop a world-class public airport for unmanned aircraft systems on property in the Eldorado Valley, she added in city documents.

“The proposed droneport will be setting the standard for droneports nationwide,” Community Development Director Brok Armantrout told the planning commissioners at their monthly meeting Feb. 15.

“All activities there point to joint projects for development,” Danielewicz said at the meeting. “We need to create a zone that represents it.”

The scope of the proposed zone is to allow and promote the development of research and development facilities as needed through public and/or private ownership. The uses permitted through the zoning classification include, but are not limited to, energy generation, technology development and ancillary facilities.

“The reason for the relative lack of detailed zoning regulations is because the intent of this zone, like the ER (energy resource) zone, is that activities in the zone will be subject to leases on city-owned land,” Danielewicz wrote in a staff report.

Several planning commissioners expressed concern because of its proximity to the municipal airport.

“What has been done to prevent air traffic issues with the airport?” asked Planning Commissioner Steve Walton.

“It’s quite distant, well beyond the airport and overlay requirements,” answered Danielewicz. “There’s no conflict.”

“Well there’s no conflict on the map,” responded Walton, who added that as a pilot he has knowledge of it, as well as knowledge of schools that use it.

“I think there is a large area of potential conflict,” he said. “Have there been any conversations with the airport?”

Planning Commissioner Ernest Biacsi also suggested the city talk with the FAA about its requirements for drone usage near an airport.

“They should talk to the FAA because they are the ones that have jurisdiction,” he said.

In response to these concerns, Armantrout said the FAA has been involved with the project since the beginning, and the airport has been briefed to the extent of its authority, which stops at the airport.

Conflicts between drones and planes would also fall under FAA protocol, and in those situations the pilots have been briefed about what to do.

“We’re on the map, and this would be a great opportunity for not only us but also the state of Nevada,” he added.

Commissioners approved 5-1 the recommendation to add the new zoning classification, as well as amending the master plan and the rezoning for the 50 acres.

Commissioner Jim Giannosa voted against the recommendation, and commissioner Fritz McDonald was absent from the meeting.

In other actions, commissioners:

■ Held a public hearing and approved a recommendation for the City Council to give public service funds from the Community Block Grant to Emergency Aid of Boulder City and Lend A Hand of Boulder City.

■ Held a public hearing and approved a variance for 597 Malaga Court, which allows a recreational vehicle garage to be partially located in the front yard.