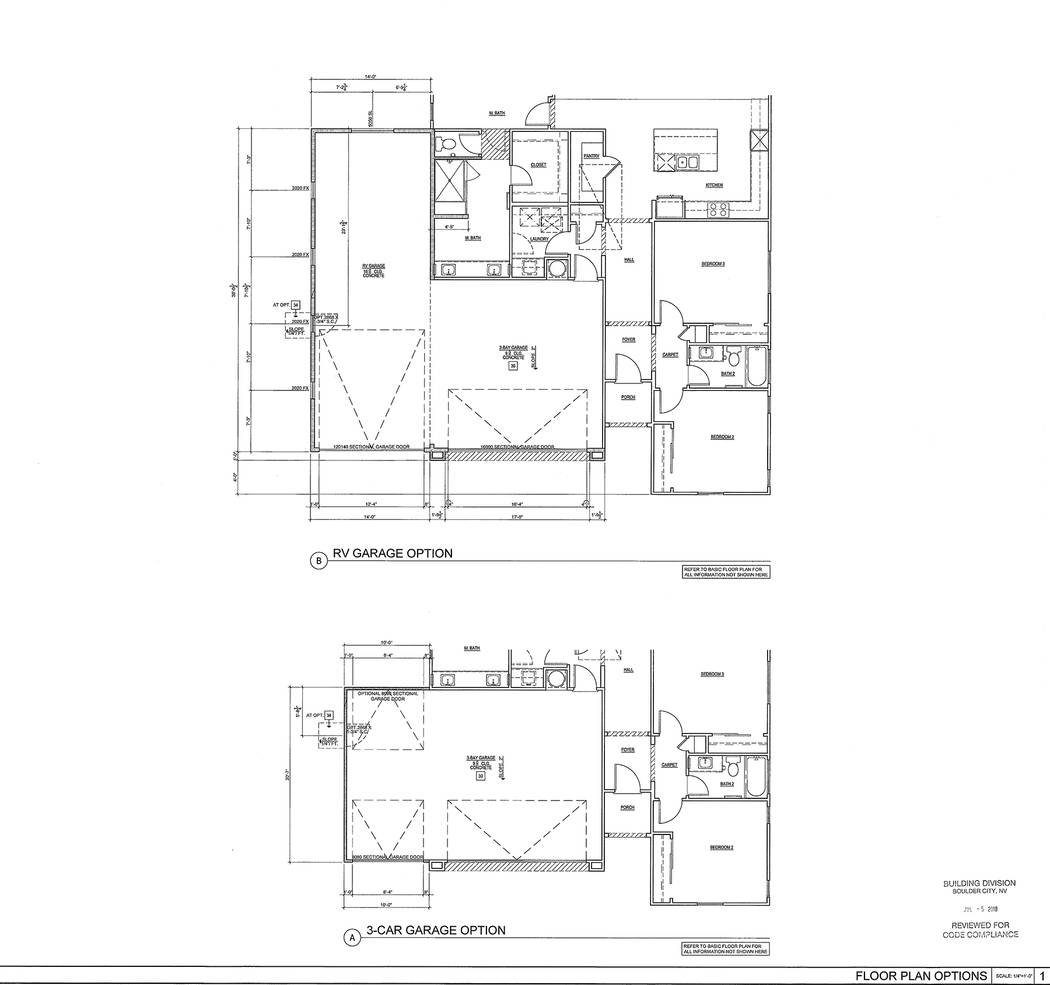 Boulder City StoryBook Homes' proposed Plan 2 for its Boulder Hills Estates neighborhood at Adams Boulevard and Bristlecone Drive shows the RV garage option. The builder requested a variance for a reduced side setback to allow for construction of the garage.

Planning commissioners approved a resolution that will allow StoryBook Homes to build RV garages on two of the five models it plans to offer at its new Boulder Hills Estates subdivision being built near Adams Boulevard and Bristlecone Drive.

The resolution grants StoryBook a variance allowing a 16-foot combined side setback between houses where city code requires 20 feet.

Additionally, in his last act as a planning commissioner, about 24 hours before he died, Tom Clements added conditions to the resolution that would prohibit StoryBook from including sewer cleanouts and RV electrical outlets in the garages. His concern was that those features could allow homeowners to turn their RV garages into guest bedrooms or rentals.

The amended resolution was approved 3-2, with commission chairman Fritz McDonald and Jim Giannosa voting against the proposal. Commissioners Ernest Biacsi and Paul Matuska were absent.

McDonald questioned how this variance differed from the 15-foot side setback the builder requested in September 2017 that was denied by the Planning Commission and City Council. He also didn’t want to give StoryBook “carte blanche” that would allow the smaller setback on all remaining properties and would have preferred a cap on the number of lots.

He said he struggled with his decision because he did feel it would be better to have RV garages that matched the homes.

Giannosa said he felt the builder had plenty of time to come up with a design for an RV garage that didn’t require a variance since they were still in the development phase.

Both also said the request didn’t meet the city’s five requirements to issue a variance.

She said the likelihood of all homebuyers selecting either of those plans and wanting an RV garage was small.

Danielewicz also said that before the current code was put into place several decades ago, the city only required a 15-foot combined side setback.

Cokie Booth said she preferred the option of letting homeowners build enclosed garages rather than relying on open shade structures to store RVs on the sides of their homes.

“We have to look at what’s best for the community and that’s enclosed garages,” she said noting that many houses in Boulder City are second homes and residents buy here because of the proximity to recreational activities.

Commissioner Steve Walton agreed, saying that although he wasn’t in favor of granting the variance he felt the alternatives for RV storage were “less than desirable.”

Janet Love, president of StoryBook Homes, said they were seeking the variance because they had received numerous requests from potential buyers who wanted an RV garage. She also said this variance differed from the builder’s earlier request for a 15-foot setback because that one was for living space within the home.

Love said they hosted a neighborhood meeting in July to gauge interest in their proposal and there were not many negatives.

“We’re just looking to an enclosed use already permissible by code,” she said.

The variance request also included the ability to cover as much as 60 percent of the lot when an RV garage was built instead of the 40 percent maximum now allowed.

Residents Glenn Feyen and Judy Dechaine spoke against granting the variance, citing it didn’t meet the criteria for issuing a variance, was similar to what had already been denied and was just a way for the builder to make a greater profit.

Ross Johnson, spoke in favor of the variance, stating he wished there were enclosed garages in his neighborhood so that RVs didn’t have to be parked on the street or in the front yard.

“I don’t suspect that 60 percent of the people will want an RV garage and be willing to pay the extra money,” he said.

The meeting concluded with a short presentation by Community Development Director Michael Mays about the city’s strategic plan, Envision 2020, which will be updated later this year.