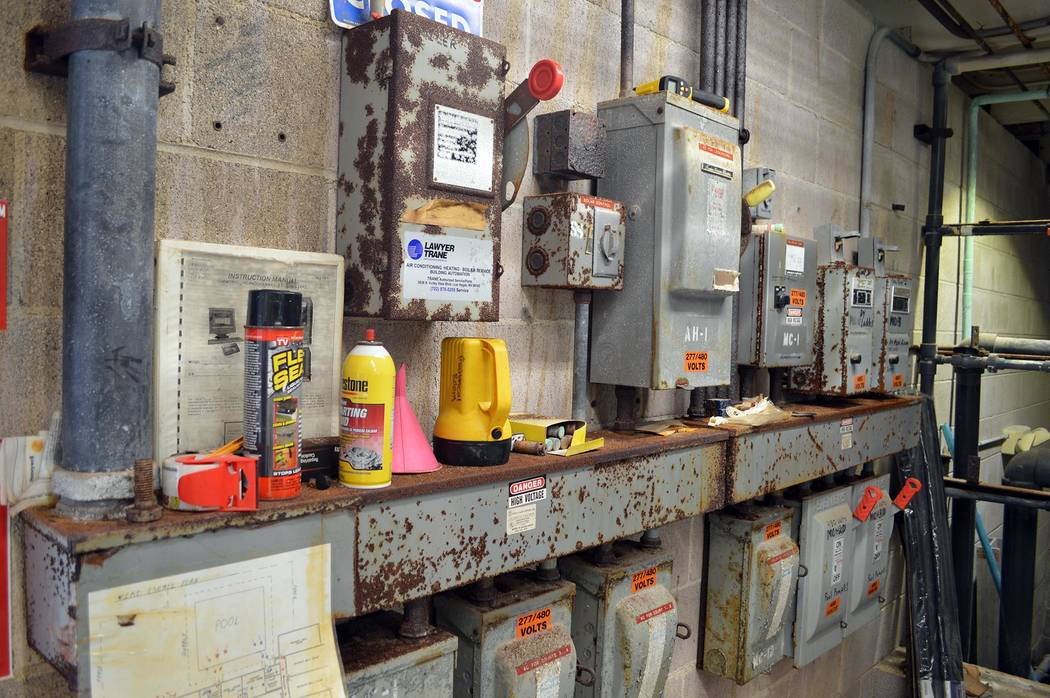 The city has drafted a financial plan to raise funds to repair or replace the municipal pool, which has outdated and rusty equipment in the mechanical room.

A new funding plan recently drafted by city staff may allow Boulder City residents to enjoy a new or upgraded pool without having to pay more taxes.

Finance Director Diane Pelletier unveiled the plan, which stemmed from the ad-hoc pool committee meetings. It would allow the city to start saving for a new or renovated aquatic center without having to raise taxes for residents while details of the project are being determined.

The municipal pool is about 40 years old and in need of extensive repair, and must be brought up to current code or replaced altogether. In 2019, a ballot question asking whether the city could authorize issuing up to $40 million of general revenue bonds to pay for a new aquatic center failed. Issuing those bonds may have caused a tax increase.

“This plan is different,” said Pelletier. “It involves five steps, none of which requires a tax increase.”

According to Pelletier, staff is hoping these steps provide the city with at least $23 million in available funds for the pool.

She said the first step, or milestone, is using the $1.34 million anonymous donation to the pool that was received in June 2019. It has been put into a separate account and is accruing interest.

The next step is to ask City Council to pass an ordinance that will allow all unbudgeted excess revenue after expenditures from fiscal years 2019-2022 to be put into an aquatic center project fund.

“We hope this step generates about $5 million,” Pelletier said.

The next step is to have two questions on the November ballot that will provide money for the project from the capital improvement fund.

The first question would allow a one-time $7 million withdrawal from the fund and the second would allow for a $1 million yearly withdrawal until the pool construction starts.

The fourth step is a third ballot question that will ask voters to reappropriate land sales proceeds from Tract 350 toward the aquatic center project. Pelletier said that step is expected to bring in $10 million.

At its Feb. 11 meeting, City Council directed City Attorney Steve Morris to draft the three ballot questions and have staff work on a sunset clause for the yearly $1 million withdrawal from the capital improvement fund.

“Concurrently, we will be drafting the code amendment for approval by council sometime this spring,” Pelletier said.

If needed, the final step would be to ask the residents to approve a 10-year bond issue that would cover the balance needed for the project.

“The first four mile markers accumulate cash,” Pelletier said. “The final step … would ask voters in June 2021, or when final cost estimate is known, to authorize a medium-term bond, 10 years or less. This type of bond does not require a tax increase.”

“That’s certainly going to be attractive for the community that it would be done without a tax increase,” said Mayor Kiernan McManus during Pelletier’s presentation.

“I am very very happy with the staff,” Councilwoman Judy Hoskins said. “I think they’ve done such a fantastic job in figuring out a way to arrive at this, and I’m also very proud of the pool committee because they have tried to find alternatives for something that I think is very valuable for our children and for our seniors.”

Added Councilwoman Claudia Bridges: “… I feel like this is going in the right direction. … I like the idea of having to come up with a savings plan for that.”