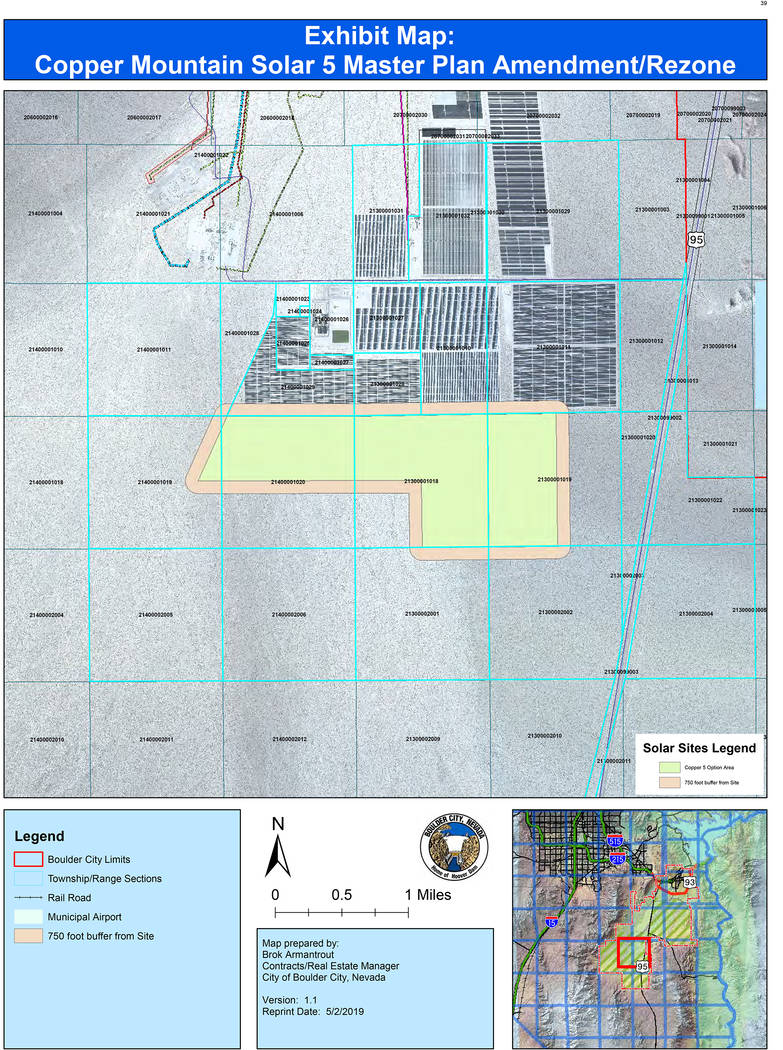 (Boulder City) The Planning Commission is recommending more than 1,000 acres of the Eldorado Valley be rezoned to allow for a solar energy facility, Copper Mountain Solar 5. A larger conservation area will also be created through the proposed change.

The Planning Commission is recommending an amendment to the city’s master plan and a zoning change that will provide a larger conservation area and more solar development in the Eldorado Valley.

At its May 15 meeting, commissioners unanimously approved recommending that the City Council approve the changes. Both the amendment and rezoning are part of an option agreement to lease approximately 1,150 acres of the Eldorado Valley, south of the existing Copper Mountain lease areas, for Copper Mountain Solar 5. The parcel of land includes a desert tortoise easement and was originally zoned for open lands-conservation.

With the agreement, the Boulder City Conservation Easement would have to be adjusted to remove the parcel as well as include new land west and north of the substation complex for conservation. It will also be zoned for energy manufacturing.

“In exchange for allowing these 1,150 acres to be removed from the desert tortoise easement, the city is agreeing to add approximately 1,900 acres to the easement northwest of this site near the Sloan Canyon NCA (National Conservation Area),” said Community Development Director Michael Mays. “As part of the evaluation of the land swap, an evaluation of ecological resources was conducted in 2018. This study determined that the replacement land was equal to and in some ways better for tortoises and other area wildlife.”

Chairman Fritz McDonald said he is recommending the amendment and rezoning because “it seemed like a win, win, win” scenario.

He said the city wins because it gets money from the solar project, the desert tortoise and other wildlife win because they get a better and larger area for conservation, and desert area enthusiasts win because the area can still be used for recreation.

Commissioner Cokie Booth said years ago that area was almost developed into a landfill.

“Consequently, I will always vote for solar in that area because it’s better for the community than a Class 4 landfill. It’s good growth for the city,” she said.

The boundary easement change will need to be approved by the Clark County Board of Commissioners before it is finalized. Mays said he expects that to happen in June. Additionally, the City Council is scheduled to introduce two resolutions for these changes at its meeting Tuesday, May 28.