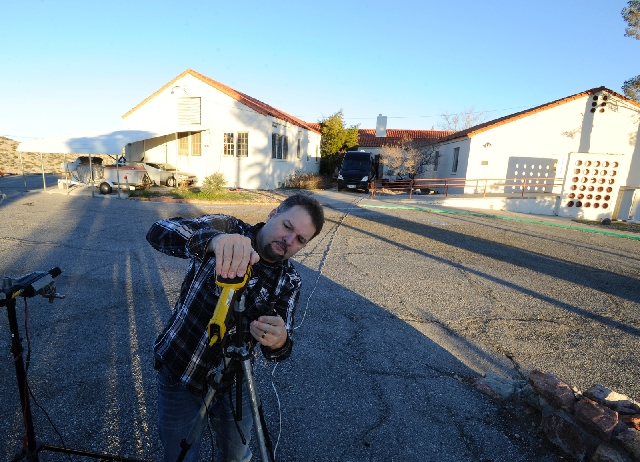 But they were among the reports of strange phenomena at the old Boulder City hospital that were enough to intrigue Jason Hawes.

“I’ll be honest, some (of the claims) were really far-fetched,” says Hawes, founder of The Atlantic Paranormal Society and star of Syfy’s “Ghost Hunters.” “You know, at one point I’m hearing some people claim to see what appeared to be angels descending into the building. And, of course, all I can do is roll my eyes on that one.

“There have been claims that have gone on there for an extremely long period of time. And I think, over time of course, they’ve been hyped up, and things have been added to it.”

Hawes, a plumber by trade, says he’s been contacted about the former hospital numerous times. And with 1,000 to 1,500 new case requests flooding his email each day, he can afford to be choosy about the ones he and his team investigate.

Still, when he and his “Ghost Hunters” colleagues found themselves in the vicinity looking into other reports, he says, “We figured we’d stop in and see what was going on.”

The episode finds Mona Young, president of I Am Free Inc., which had moved into the former hospital, wondering if the building is safe for her organization’s community outreach programs.

She discusses people who’ve heard “groanings and moanings.” Others report lights turning on, doors opening and new flashlights that stop working. And a young resident of the facility recalls waking up one night after feeling her toes being tickled and seeing “two shadow figures.” (Regardless of your beliefs in the paranormal, surely everyone can agree that if ghosts do exist, there’s something seriously wrong about them spending their nights tickling little girls’ toes.)

“They had some neat claims as well of shadow-type entities, of seeing full figures of people, of children hearing voices, objects moving,” Hawes says. “And that was what drew us there. Of course, I didn’t go there because of the claim of angels descending, that’s for sure. And a claim like that is definitely, it’s far out there. It really is.”

He also dismisses any chance that bringing his Rhode Island-based team into the backyard of Las Vegas’ “Ghost Adventures” crew and its Travel Channel series could start some sort of East Coast-West Coast paranormal turf war. “Oh, no. Come on. Gimme a break,” Hawes says. “I don’t know them from a hole in the wall.”

For the episode, the “Ghost Hunters” team covers the grounds with cameras, sensors, electromagnetic field monitors and something called a shadow detector. They then spend the night creeping around in the dark, trying to interact with any spirits that may have stuck around after the hospital closed its doors in 1935 with the completion of Hoover Dam. It reopened in 1943 and operated for 30 years until the current one at 901 Adams Blvd opened.

After a brief history lesson, they turn most of their attention to Boulder Dam workers who may have been maliciously diagnosed with pneumonia despite actually suffering from carbon monoxide poisoning.

Like any good host, the “Ghost Hunters” crew is engaging, asking plenty of questions and trying to strike up conversations. But whatever’s inside the former hospital isn’t terribly chatty.

Hawes hears what sounds like a female voice coming through his two-way radio, even though none of them are in use at the time.

Tech manager Dave Tango gets rattled when a door opens by itself and he hears footsteps “loud as can be,” referring to it in the episode as “one of the craziest experiences I’ve had in a very long time.”

Those are just a couple of examples of what the team encountered during what Hawes terms “just a great time, a great experience.”

“It was a lot of neat things that really showed up,” he adds.

So how did their Boulder City Hospital investigation rank among the nearly 200 they’ve lived to tell about during the show’s nine seasons?

“It’s definitely one of the better ones, ’cause over 80 percent of our investigations we’re able to debunk or figure out what’s truly going on has nothing to do with the paranormal.

“So anytime we’re able to get experiences which seem to be true paranormal experiences, then of course it definitely goes to the top of the list.”