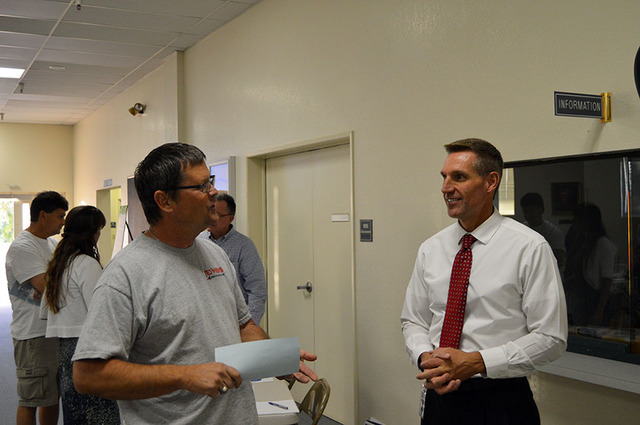 Max Lancaster/Boulder City Review Boulder City resident Dennis Maring, left, talks to Public Works Director Scott Hansen about utility rate increases at a public workshop on Oct. 5. Maring said he does not trust that the city will competently use the revenue from the new rates.

The city’s implementation of higher utility rates caused concern and confusion among many Boulder City residents, leading city officials to set up a utility workshop Oct. 5 to ease some of the tension.

The two-hour event was packed with residents seeking clarity on the rate hikes, with questions ranging from how much their bills would increase to how the extra money in the utility fund will be used to help the city.

City officials set up seven stations to help residents understand each aspect of the increases to electric, water and sewer rates. Residents will see the new rates on their November bills.

The City Council in May approved a 17 percent increase in water and sewer rates and 16 percent in electric, with subsequent increases planned.

City Manager David Fraser said the workshop was an opportunity for residents to learn more about their upcoming bills. The public’s perception of the workshop and the rate hikes was mixed, with residents’ emotions ranging from acceptance to frustration.

“I don’t have a problem with the rate increases,” Prestwich said. “They are a good way to pay for a new electrical system, which we desperately need.

The city’s six electrical substations have an average age of 45 years, according to a 2012 study on Boulder City’s power grid by Science Applications International. The study recommended a utility rate increase because the rate of depreciation of the utility system was increasing faster than the city’s ability to afford the necessary repairs.

The city is setting up a 10-year plan that, if completed, will replace all the old transformers and substations, according to Public Works Director Scott Hansen.

Prestwich was not the only resident who said the city was doing the right thing by increasing rates.

Douglas Gerwitz said people who want a modern utility system have to pay for it.

“Maintenance costs money and without the new rates we are not going to have enough money to fix the problems with our systems. The city is just responding to a community need,” Gerwitz said. “Everyone I know who was complaining about the rate increases was not at this workshop and they were not at any of the council meetings about it, so they really have no reason to complain.”

Not everyone in attendance was happy about the rate increases. Dennis Maring said he did not trust the City Council and city officials to properly use the income generated by the higher rates.

“These people don’t know anything about running a utilities company,” Maring said. “We are supposed to trust the council when we have no money for utilities on reserve and no one to regulate the council?”

The city is working on a plan to put money into a utilities reserve fund and currently has a small amount on hand, Hansen said.

Many residents worried that the extra money in the utility fund was going to be used to pay for increased consumption by potential new-home developments in areas like Bristlecone Drive near the golf course, which would add 200-plus homes to Boulder City, or the 640 acres in Eldorado Valley that developer Randy Schams hopes to develop.

Hansen said he does not think the new homes will increase costs because the city estimates no more than 1 percent growth over the next 10 years.

“The 200 homes on Bristlecone are not that much to increase costs and when we created our plan we estimated little to no growth in the city,” Hansen said. “Our plan is to fix our utilities and that is what the money in the utility fund will go to.”