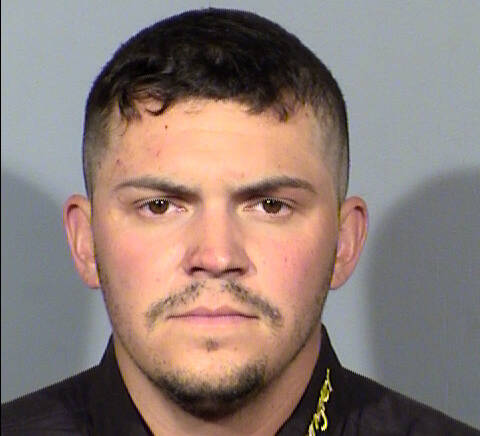 Joshua Buckingham agreed to a guilty plea of felony reckless driving in the March 2019 crash that killed Randy Reiner, 58, of Las Vegas. He is set to be sentenced Nov. 15.

Joshua Buckingham, who was driving more than 100 miles an hour when it struck a pickup truck on Boulder City Parkway in 2019, killing its driver, has agreed to plead guilty to a felony reckless driving charge.

Under the plea agreement, Buckingham will be sentenced to one to six years in jail and fined between $2,000 and $5,000 as well as forfeiting any weapons he may own.

Additionally, he agreed that if he fails to appear at any future hearings in this case or there are new criminal charges against him for reckless driving or DUI, the state may consider him a habitual criminal and has the right to increase his sentence between five and 20 years, life without the possibility of parole, life or a 25-year term with the possibility of parole after 10 years.

The agreement was submitted to the court on Aug. 18 and waives his right to a jury trial. He is scheduled to be sentenced at 9 a.m. Nov. 15.

According to the amended indictment issued as part of the plea agreement, Buckingham was traveling more than 100 miles per hour “with willful or wanton disregard” for the safety of others or property when the sedan he was driving struck the pickup and killed Randy Reiner, 58, of Las Vegas.

The Nevada State Railroad Museum and Friends of Nevada Southern Railway have been awarded an $11,000 grant from the Union Pacific Railroad to replace its aging mobility lift. This grant ensures all who visit the museum will continue to have equal access to our trains and exhibits.

“Union Pacific is proud to partner with the Nevada State Railroad Museum on a project that will help ensure everyone has access to learning more about the rich historical legacy of railroads,” said Francisco Castillo, senior director of public affairs for Union Pacific Railroad. “Through our Community Ties Giving Program, Union Pacific is working to help improve the quality of life for individuals with disabilities, as well as supporting communities where our customers and employees work.”

The Clark County coroner’s office has identified the body of a drowned man found at the Lake Mead National Recreational Area.

Travis Williams, 44, was found near the Cottonwood Cove area in Lake Mohave, according to the coroner’s office.

Williams’ body found around 11 a.m. Sept. 3, according to the National Park Service.

He was seen the afternoon of Sept. 2 struggling to swim back to his boat, according to the park service. A dive team searched the area that night until heavy winds forced them to suspend the search until the following morning.

In celebration of America Recycles Day on Nov. 15, Nevada’s kindergarten through 12th grade students are invited to showcase their creativity and commitment to protecting our planet by participating in the Nevada Division of Environmental Protection’s Nevada Recycles Poster Contest. The contest is open now through 5 p.m. Oct. 13.

To participate, students will need to create a poster that highlights this year’s theme: “Refuse It or Reuse It.” The poster should promote ways to reduce waste by refusing to take something you don’t need or reusing items that you might otherwise toss in the trash. To submit a poster, go to https://bit.ly/3q4IU6z.

The contest will be split into four categories for judging: kindergarten through second grade, third through fifth grade, sixth through eighth grade and ninth through 12th grade. Three winners from each category will be selected.

To view past poster winners and learn more about this year’s contest, go to NevadaRecycles.nv.gov.