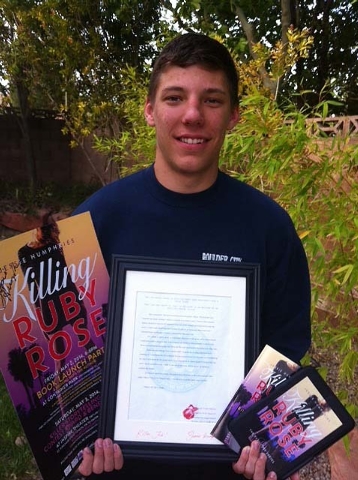 According to National Park Services spokesperson Christie Vanover, the man and two other adults were swimming at Boulder Basin when the winds began to pick up. As wind gusts increased to 30 miles per hour, the three men drifted from their boat, Vanover said.

Two men made it back to the boat, while the other man, whom Vanover said wasn’t wearing a life jacket, did not return. Eight people were onboard the pontoon before the three men went swimming, she said.

The National Park Services and Department of Wildlife began searching for him about 4:45 p.m. Saturday, but called off the search later in the evening because of high winds, Vanover said. They resumed their search Sunday.

As the third-place winner, Edlund received a framed copy of his entry signed by Humphries, a bound book of the top 10 finalists’ stories and a custom Kindle with a downloaded copy of “Killing Ruby Rose,” Humphries debut novel, and the original song written for the book’s launch.

His entry was submitted by Molly Spurlock, who teaches AP English language and composition at the high school.

More than 7,000 entries were received.

The contest was designed to encourage high school students to submit the first page of a story that would grab a reader’s interest, creating a hook, sense of intrigue and reason for the reader to want more. Students were expected to write and revise their entry which was limited to a maximum of 250 words.

BCHS student Carlee Blumenthol was a top 10 finalist in the contest.

Edlund is the son of Brent and Kris Edlund of Boulder City.

The grant will primarily benefit the institute’s Green Box program. Each Green Box contains all of the necessary tools to conduct several weeks’ worth of activities addressing environmental issues and emphasizing sustainable practices. They provide curriculum and materials, which include hosting hands-on training and workshops, and facilitating class field trips and guest speakers — all at no cost to the teachers.

The Keyser Foundation’s latest grant is the second $100,000 donation GreenPower has received. This allows DRI’s GreenPower Program to increase the reach of its program throughout Nevada. With the EPSCoR’s Nevada NASA Space Grant, one of DRI’s scientists, Henry Sun, is creating a desert astrobiology Green Box. For use in the first-through sixth-grade classrooms, the curriculum will explore microscopic organisms, specifically cyanobacteria, which inhabit the soils of the desert Southwest and the critical functions they provide.

More than 35 Green Boxes have been checked out this academic school year, reaching about 5,000 students. Because of their growing popularity, more than 18 new Green Box topics including natural gas, wind and geocaching are in development and will be available to check out later this year.

Along with Green Boxes, the GreenPower Program provides professional development opportunities for educators such as the sixth annual teacher training that was recently held in Las Vegas and Reno.

For more information about the Green Box program, visit http://www.dri.edu/greenpower or call 702-862-5332.