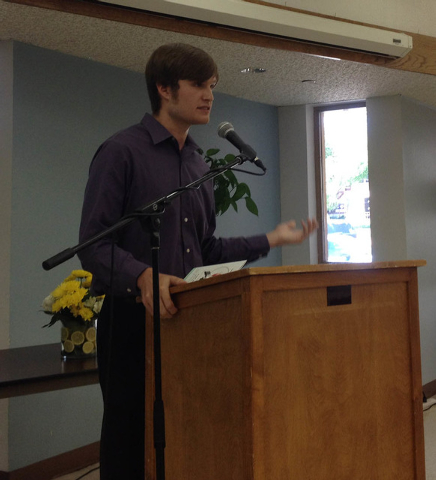 Fiddlesticks quilt shop will close at the end of the month, according to owner Merry Summey.

Summey, who has owned and operated the shop on Arizona Street for 19 years, said she regrets having to close Fiddlesticks but needs to move to Texas, where her husband, Paul, has been working for nearly 1½ years.

“He’s been living in a hotel and eating fast food,” she said about the decision to join him.

Summey said she tried to find a buyer for the store before making the decision to close it.

She said she believes the owner of the building has already found new tenants for the two spaces Fiddlesticks occupies.

A quilter for about 30 years, Summey said she loves Boulder City, and they will keep their home here. She said she hopes to visit periodically.

Lend A Hand of Boulder City is one of 18 finalists of the 2014 Governor’s Point of Light Awards, the highest honor bestowed on a volunteer in Nevada.

Finalists will attend the Governor’s Points of Light Award Ceremony Sept. 18 at Bally’s Las Vegas where the award recipient for each category will be announced. Winners are selected by a panel of leaders in business, government and nonprofit groups from across the state based on how their volunteerism exemplifies achievement, need, innovation, mobilization and endurance.

Finalists were announced Aug. 1 by Nevada Volunteers, the Governor’s Commission on Service.

The first was recovered Friday after officials received a call at 4:52 p.m. about a man’s body floating near river mile 44 on Lake Mohave. A 53-year-old Las Vegas man was reported missing near this area after jumping off his boat to go swimming without a life jacket.

The Clark County coroner’s office will confirm the victims’ identities and determine cause of death. Both incidents are under investigation.

Thompson said that shortly after graduation he traveled to Namulanda, Uganda, to work as a missionary at an orphanage. He and a number of other recent graduates lived in the remote town and were exposed to the ravages of malaria firsthand. Not only were the locals heavily infected, he and his colleagues also were infected with the disease, including one who did not recover.

Thompson’s presentation was part of an educational program about malaria that the local church supports. Imagine No Malaria is a global initiative from the United Methodist Church and has raised more than $62 million toward a goal of $75 million to eradicate malaria from Africa.

Unlike many diseases that are awaiting a cure, malaria was eliminated from the U.S. in the 1950s. However, in sub-Saharan Africa, malaria kills one person every 60 seconds.

The Boulder City church has raised more than $1,200 to support the initiative. Donations can be made at http://imaginenomalaria.org/.

The 29 days of training provide professional training and evaluation in military life, administration and logistical support. Although continued military training and leadership development is included in the curriculum, the primary focus of the course is to develop and evaluate each cadet’s officer potential as a leader.

Cadets in their junior and senior year of college must complete the leadership development course. Upon successful completion of the course, the ROTC program and graduation from college, cadets are commissioned as second lieutenants in the U.S. Army, National Guard or Reserve.