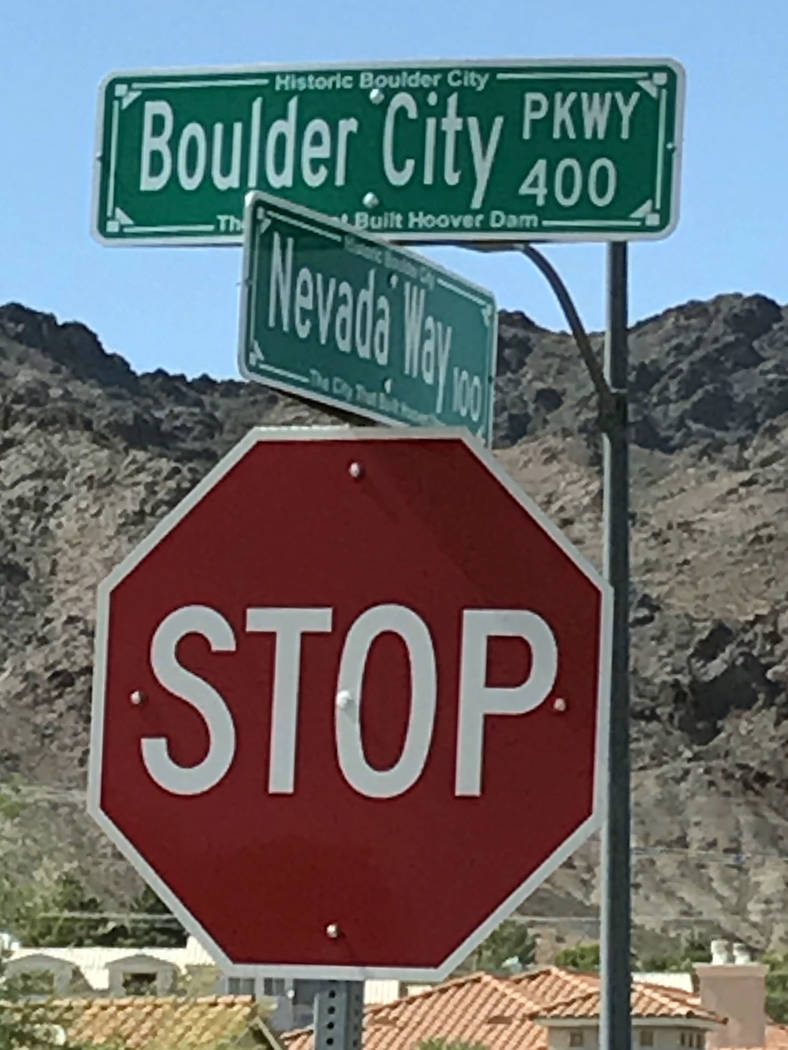 Boulder City This is a rendering of the new street signs the city's public works department installed along what used to be Nevada Highway and is now Boulder City Parkway.

The main road headed into Boulder City has received a new name, and the city is in the process of changing its street signs to reflect it.

With the opening of Interstate 11, Nevada Highway is being changed to Boulder City Parkway. The name was changed to bring more visibility to the city and increase the number of visitors who stop by.

“The name change just impacts the four-lane highway through the city,” said Acting City Manager Scott Hansen. “The change does not impact downtown.”

According to Hansen, the public works staff has replaced all of the signs along the main route through town, which includes Gingerwood Street, Yucca Street, Madrone Street, Lakeview Drive, Lake Mountain Drive, Ville Drive and Pacifica Way.

“The lighted signs at the two traffic signals will be changed out soon,” he said. “Some of the traveling public will notice the new signs.”

In addition to the new signs, businesses have to make some changes to accommodate the new name.

Cokie Booth, owner of B.C. Real Estate, said the new road name means she has to change the business’s address with the state of Nevada as it is a real estate company in addition to updating all her business materials.

“That’s where the cost comes in,” she said of those materials. “It will cost a couple of thousand dollars to do all that.”

The reason it will cost that much for new things like business cards and stationery is because she has to pay an artist to create them again. She estimated changing the address with the state to cost about $20.

“I don’t think it’s going to be a big deal for anybody, but there is some cost involved,” she said.

Ken Schultz of the Boulder City Water Store at 1311-A Nevada Highway also said this name change is going to cost him time and money because he has to change it with every person and vendor with whom he does business.

“I have to change my address with probably 50 vendors,” he said.

“The post office has also been notified of the change,” Hansen said. “Businesses may contact the post office for more information regarding how this may impact their deliveries.”