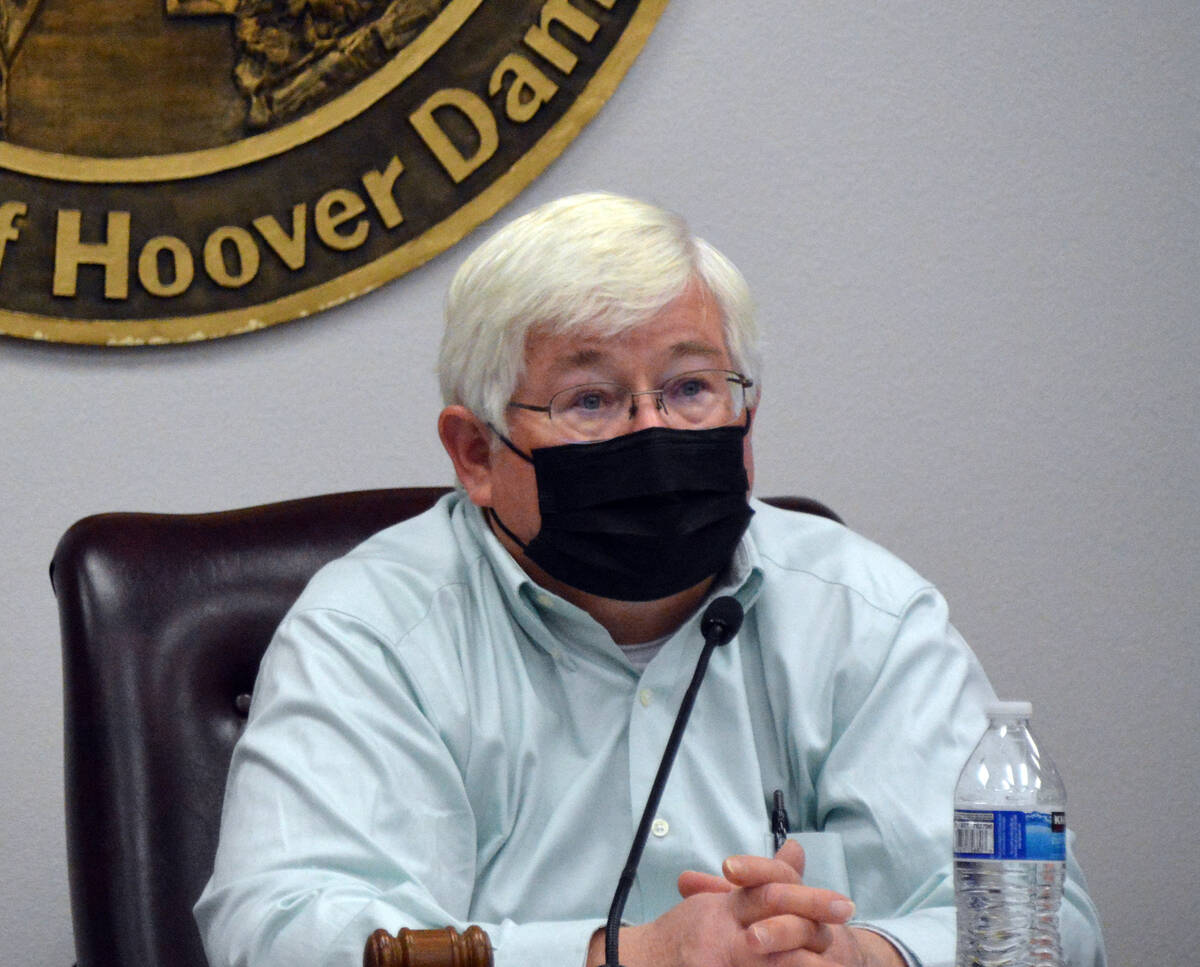 (Celia Shortt Goodyear/Boulder City Review) Mayor Kiernan McManus’ request for staff to research creating a special improvement district for the soon-to-be-developed Tract 350 failed at the Tuesday, Jan. 11, City Council meeting when it did not receive a second by another council member.

Tract 350 is a 45-acre parcel adjacent to the northeast portion Boulder Creek Golf Club and south of Adams Boulevard. It was approved for sale by voters in 2010, and council recently approved moving forward with selling it to luxury home developer Toll Brothers. The city stands to bring in approximately $28.5 million in revenue over the course of the project.

At Tuesday’s, Jan. 11, City Council meeting Mayor Kiernan McManus put an item on the agenda to discuss having staff research creating a special improvement district to pay for the installation of a storm drain system near the land. The storm drain is necessary for the project to be completed.

“The fact is that this channel is going to benefit the residents in that area,” he said. “It is certainly a common thing that occurs that these types of assessment districts are created so that the landowners or the people who become the landowners are going to be responsible for the infrastructure that allows for development of that area.”

In its request for proposal that was approved by council at a Nov. 30 special meeting, Toll Brothers included options for installing a storm drain. The project is estimated to cost $1 million to $1.5 million. If they made the improvements, they would pay approximately $1 million less for the land or $20,000 less per acre.

McManus said that meant “that the residents of Boulder City are down a million dollars in revenue” if the sale went forward in that manner.

“Whether it’s the developer taking less money or the city going ahead, it’s the residents of Boulder City who lose this revenue unless the future property owners have an assessment placed on their properties to pay for this project,” he said.

City Attorney Brittany Walker said if council moved forward with a special improvement district, it would still cost the city money and could delay the improvements and the project.

“When I say it would delay, it’s because we’d have to create the special improvement district to begin those improvements whereas the developer right now could just go ahead and make these improvements,” she said.

She also said they would have to make sure Toll Brothers was still comfortable moving forward with the sale. If they weren’t, the city would have to do another request for proposal.

“I believe this is contrary to the … offer that came in from Toll Brothers,” said Councilwoman Claudia Bridges. “I know it was discussed that we would accept or consider the option that it would be a million dollars less and they would pay for the improvement.”

Additionally, Bridges said the property owner would pay for these improvements no matter what because Toll Brothers would likely incorporate those costs into their sale prices of the homes.

Councilman James Howard Adams said he is always open for information on what creating a special improvement district “looks like” but he saw no reason to do it if the majority of council wasn’t in favor of it.

He also said creating the district is going to cost the city money and they may not see its return for years.

“We’re talking about 10, 15 years probably down the road before we would even see it realized … . To the point where it might delay or cause us to have to reissue an RFP, that’s something I’m not interested in having to go through again.”

Before making the motion to approve having staff research creating this district, McManus said it was “unquestioned” that if it wasn’t created, Boulder City residents would never recoup the $1 million.

“We will simply be giving it up for some land to be developed and we’ll get some income from that, but we will never recover the cost of building that storm drain at the expense of the residents of Boulder City,” he said.

His motion failed when no other member of council seconded it.

Currently, staff is finalizing a sales agreement with Toll Brothers for Tract 350 and getting an independent appraisal for the land.