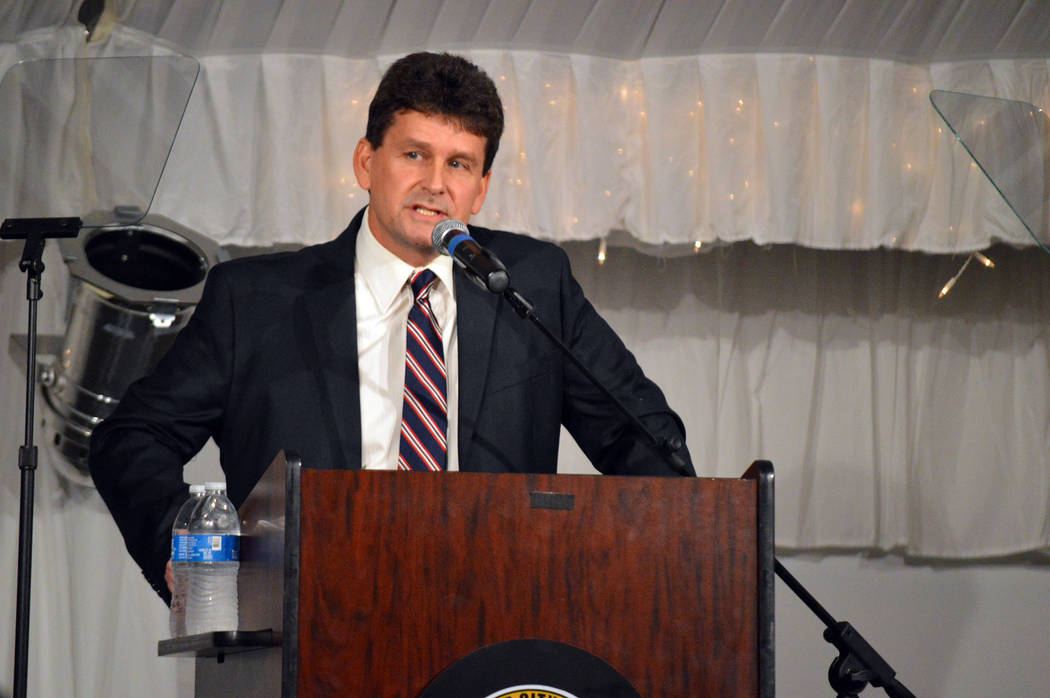 A new energy and positive outlook about Boulder City business and leadership were some of the high points of Mayor Rod Woodbury’s annual State of the City address late last week.

“There’s a new energy and enthusiasm at City Hall,” Woodbury said Jan. 17 at the Boulder Creek Golf Club pavilion. “We hired Al Noyola as our city manager in March. He has brought great ideas to the table and worked hard to rev up staff morale.”

Woodbury praised Noyola and the new staff he’s hired and their work in joining his vision for the city of family and faith first, being business-friendly, having crystal clear communication, keeping the financial house in order and picking up the pace.

“Last year and the year before, I was able to report discernible improvement in most of those areas,” he said. “But this year is the first time that I feel like I can genuinely say that staff at all levels has truly caught the vision and begun to implement it in earnest. In fact, they’re doing it with a very refreshing sense of urgency and alacrity, I might add.”

Woodbury highlighted the staff’s efforts in helping with the city’s new strategic plan as well as working to update the city’s code, getting new digital voting machines, streamlining the building permit process and having a clean financial audit.

He said the city is not in a shutdown or a slow-down mode.

“Instead, we are in high-octane mode, as we should be, moving briskly to get out in front of the issues and opportunities that await us,” he said.

During his speech, Woodbury said that society is suffering from “truth decay,” and he thanked city staffers for their commitment to data.

“Truth matters,” he said. “So I’m thankful to staff for its clear commitment to data-driven solutions rather than giving in to the increasing pressures of ‘truth decay.’ Good inspiration is dependent upon good information. And the best inspiration comes when we have the best information available at our disposal.”

Residents who attended seemed pleased with the mayor’s presentation and what is happening.

“We feel there is a positive energy in town,” said longtime resident Barbara Adams.

She and her husband, Paul, have lived in Boulder City for 51 years and attended many State of the City events.

Paul Adams said it was nice to be on the other side of Interstate 11’s opening.

“I think there was a lot of undue worry about about I-11,” he said. “I think it’s turning out to be a benefit so far.”

“I think Mayor Woodbury is doing a phenomenal job for the city. … I like that employee morale is higher,” he said.

“It was probably the best State of the City I’ve heard,” said the Rev. Sandy Johnson, pastor of Boulder City United Methodist Church, who gave the invocation. “I was encouraged more tonight than at previous ones.”

Johnson agreed that Noyola and his staff seem to be effective at their jobs.

“It’s a package that seems to be working,” she said. “It’s encouraging that we’re not longer moving at a snail’s pace as before.”

Woodbury also touched on the growth of the Breaking the Cycle Rehabilitation Court, the Police Department being fully staffed, the Fire Department renovation and various parks and recreation and public works projects.