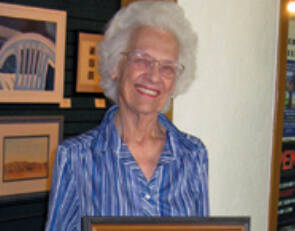 “We had a lot of good times. … We got along well and never had any serious arguments,” he said. “We’d pretty much agreed about how things should be.”

Ken Bandy said his wife suffered a major seizure June 15, 2020, and was in the hospital for 10 days. She had another one in June of this year and then several more recently.

“When she came back from that, there wasn’t much left of Cindy,” he said.

During her 48 years in Boulder City, Cindy Bandy worked as a real estate agent as well as being involved in different community organizations including the art guild.

“Cindy was one of the first artists I met when we moved to Boulder City,” said Patricia Amon. “At that time meetings were held at the tiny gallery on Nevada Way. She held many offices in the art guild over the years and was always one of the first to volunteer wherever she thought she might be able to help.”

She was also involved in local yoga and tai chi classes.

Ken Bandy said he is not planning to have a memorial service. Instead, he said he is going to have a small get-together with her friends from yoga and tai chi to honor her.