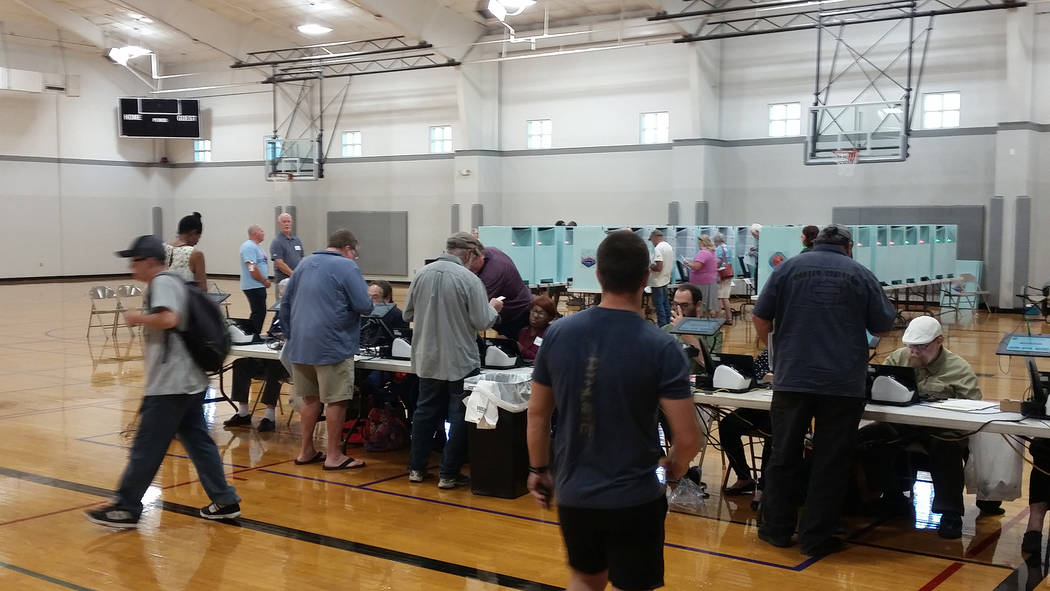 File Boulder City voters will weigh in on a variety of local issues through ballot questions at the June 11 election.

Boulder City residents will be asked to weigh in on several local issues at the polls June 11.

Those issues are whether the city should issue bonds and use capital fund money to help finance a new aquatic center, whether it can refinance its debt with council approval and whether off-highway vehicles should be able to use city streets.

Boulder City ballot Question 1 asks whether the city shall use money from its capital improvement fund toward the design and construction of a new aquatics facility in order to reduce the bond obligation. The funds would be used as they become available and would not exceed $5 million.

The city charter requires all expenditures from the capital improvement fund be approved by a simple majority of votes cast in a municipal election by Boulder City’s registered voters.

A “yes” vote would let the city use the money as it becomes available to the fund in the amount of $5 million toward the design and construction of a new aquatics facility.

A “no” vote would not allow the city to use the money from the fund.

BC Ballot Question 1 by Boulder City Review on Scribd

Boulder City ballot Question 2 asks whether the city’s code should be amended to allow the city and its agencies to refinance existing debt obligations as determined by City Council.

According to city code, Boulder City cannot incur any new debt of $1 million or more without voter approval, and the city’s bond counsel considers refinancing existing debt as new debt.

“Homeowners will often refinance a home mortgage to take advantage of lower interest rates and decrease their mortgage payments. The city debt also can be refinanced to take advantage of lower interest rates thereby reducing the interest paid over the remaining life of a loan,” said Al Noyola, city manager. “… Because of the current city ordinances regarding taking on debt we would need to gain the vote of the residents in order to refinance any amount over $1 million. This process could take months and negate any potential gain as the bond market fluctuates. This ballot question would allow council to direct the city to refinance current debt to take advantage of lower rates. The effect of this would allow for savings of thousands and potentially millions in interest payments over the life of a loan.”

A “yes” vote would allow the city code to be amended to provide the city and its agencies the ability to refinance existing debt obligations as determined by the council.

A “no” vote would not allow the city code to amended to allow for existing debt obligations to be refinanced as determined by City Council.

BC Ballot Question 2 by Boulder City Review on Scribd

Boulder City ballot Question 3 asks whether the city shall be authorized to issue up to $40 million of general obligation bonds for the purpose of acquiring, constructing, improving and equipping recreational projects as defined by state law including an aquatic center.

According to the question, the bonds are expected to require a property tax levy for 30 years. The tax rate will vary by the amount of the bond, up to a maximum of .36 cents per $100, and will be based on the assessed value of a home, not the market value of a home. As an example, the ballot cites a new $100,000 home would pay an average of $126 per year.

“The levy would be based on a home’s net assessed value. A new home sold for $100,000 would be assessed at 35 percent of the home value — much lower that the market value of a home,” said Boulder City Finance Director Diane Pelletier. “That is why it is important for homeowners to look up their property to determine the actual net assessed value. There is a state requirement to use this particular language — based on a new home at $100,000 — in a ballot question.”

Additionally, if this question is approved by the voters, any property tax levied to pay the bonds will be outside of the caps on a taxpayer’s liability for property taxes established by the legislators in the 2005 session. The question does not add to, change or repeal any existing laws. If approved, it will create, generate and increase public revenue.

A “yes” vote would permit the city to issue up to $40 million of general obligations with the expected property tax increase.

A “no” would not allow the city to issue the $40 million of general obligation bonds.

BC Ballot Question 3 by Boulder City Review on Scribd

Boulder City ballot Question 4 is an advisory question asking whether voters support the operation of off-highway vehicles on city streets according to state law.

The result of this question does not place any legal requirement on the city, City Council or any city officer.

A “yes” vote would indicate support for the operation of off-highway vehicles on city streets pursuant to state law.

A “no” vote would indicate no support for the operation those vehicles on city streets pursuant to state law.

BC Ballot Question 4 by Boulder City Review on Scribd

Early voting for the election will take place from May 25 to June 7.