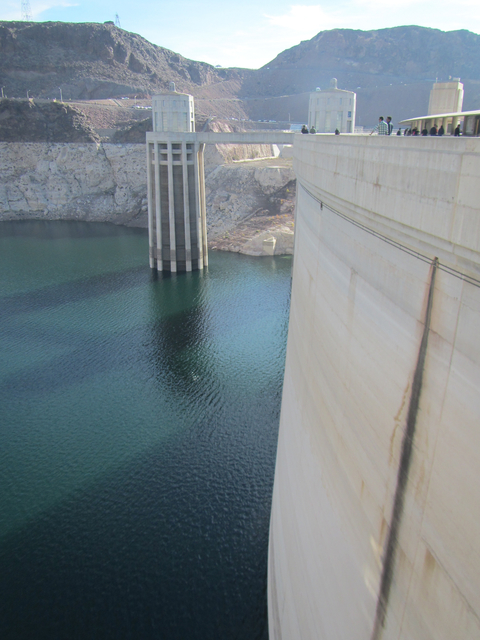 Las Vegas Review-Journal file photo Tourists walk along the top of Hoover Dam earlier this month. The Bureau of Land Management awarded the Bureau of Reclamation $2.7 to improve the dam's visitors center.

The Hoover Dam visitors center is getting a makeover after the Bureau of Land Management awarded $75 million dollars to 30 different Nevada conservation and recreation projects on Dec. 7.

Hoover Dam received more than $2.7 million for renovations and the creation of new exhibits at the visitors center.

Stacy Wade, director of finance for the Bureau of Reclamation Lower Colorado Region, said that they can use the BLM funds by early January and that “the money will be targeted for updating displays and exhibits at the Hoover Dam Visitors Center.”

According to a press release by the BLM, the funding is for “theater level refurbishment,” and is part of the bureau’s capital improvement plan.

Bill Martin, head of recreation for the Bureau of Reclamation, confirmed that some of the money for visitors center improvements will go toward new seating in the theater and that the rest of the money will go to exhibit improvements.

“I am excited to be back in my home state to announce funding for these important community projects,” wrote Neil Kornze of Elko, a BLM director. “These investments will strengthen outdoor opportunities in the Las Vegas Valley and in many of Nevada’s small towns.

Funding for the dam’s renovations was generated through the sale of public land as part of the Southern Nevada Public Land Management Act, which allows the BLM to sell property around the Las Vegas area with proceeds split between the Nevada general education fund, the Southern Nevada Water Authority and a special account for the Secretary of Interior, which is where the money for the conservation projects came from.

According to Jeanette “Rose” Davis, a public information officer for the Bureau of Reclamation Lower Colorado Region, a definitive date for when the visitors center renovations will be completed is still a long way off.

“We are incredibly excited to get the funding,” Davis said. “But right now we have no idea when the renovations and the new exhibits will be completed. We are still trying to figure out what new exhibits are and fixes we want to make.”