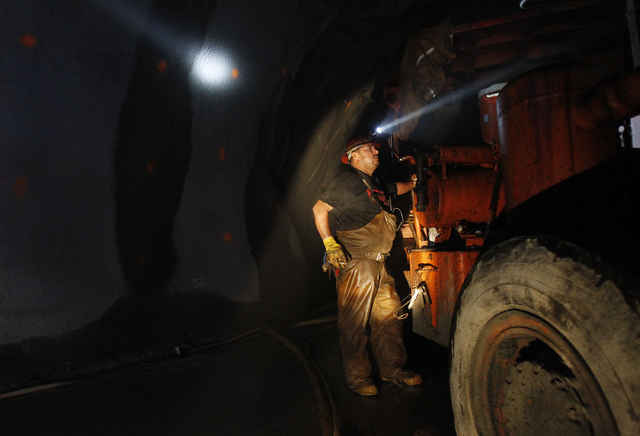 With Lake Mead shrinking and a new deep-water straw still far from finished, the Southern Nevada Water Authority plans to declare an emergency and fast-track a new $12 million construction project aimed at securing the valley’s water supply through next summer.

The proposed tunneling job would extend the life of the oldest and shallowest of two intake pipes and pumping stations that the community now uses to draw about 90 percent of its water from the lake.

Without the work, Intake No. 1 and its pump station could become inoperable if Lake Mead’s surface drops another 40 to 45 feet. Federal forecasters expect that to happen by May or June of 2015, but it could come sooner with another abnormally dry winter on the drought-stricken Colorado River.

The loss of the Intake No. 1 pump station would leave the valley with only one working pipe and one pump station at the lake.

In a memo sent Thursday to water authority board members, General Manager Pat Mulroy said it was “vital” for the new project to start immediately.

“Postponing the work on the connection will jeopardize the water supplies available for the next year,” she said.

The plan will go to the board for a vote on Sept. 26 in the form of a change order to an existing contract with Renda Pacific, a Texas-based general contractor that has spent the past three years digging a half-mile-long, $52 million tunnel to connect the existing Intake No. 2 with a third intake still under construction.

That $817 million project involves building a 20-foot-tall, 3-mile-long pipe beneath the bed of Lake Mead to draw water from one of the deepest parts of the reservoir. Work on the third intake began in 2008 and is already about 18 months behind schedule after several setbacks, including a construction accident that left one worker dead.

The current contract calls for completion in summer 2014, but water authority officials acknowledge that the project won’t be finished by then.

Marc Jensen, the water authority’s engineering director, said, “We can no longer say confidently it will be completed in ’14, but it might be.”

If the board signs off on the new proposal, Renda Pacific would spend about seven months drilling and blasting a 110-foot vertical shaft from the bottom of the Intake No. 1 pump station down to the connector tunnel the contractor now is finishing 400 feet underground near the shore of Lake Mead.

The work will require Intake No. 1 to be shut down, temporarily capped and drained, so authority officials want it done during the winter months when water demand is at its lowest.

“That’s why the emergency,” Jensen said. “Every week is precious at this point if we want to get it done this winter.”

They could wait until winter 2014 to do it, but they run the risk that the lake will shrink enough to shut down Intake No. 1 before work gets done.

“We’d rather not skin it that close,” Jensen said.

Mulroy said the community got by with just one intake and one pumping station for several decades. But, he said, the need for a backup grew as the community began to draw more of our water from the lake and less from the valley’s groundwater table.

In the 1990s, before there was an Intake No. 2, an electrical problem shut down the one and only intake and pumping station, cutting off all access to lake water.

“Thank God it was in the middle of winter,” Mulroy said. “It was a scary three days I’ll tell you.”

Last month, the U.S. Bureau of Reclamation announced that Lake Mead would receive its smallest annual water delivery ever because of a sudden dip in Lake Powell fueled by the second-driest year since drought hit the Colorado River in 2000. The same reduced release is expected the following year as well, barring an enormously snowy winter in the mountains that feed the river.

The move will speed the decline of Lake Mead, which is expected to drop almost 25 feet to a record low by November 2014 and continue to fall from there.

Forecasts call for the surface of the reservoir to hit 1,075 feet above sea level by April 2015, triggering the first federal shortage declaration on the river and prompting water supply cuts for Nevada and Arizona. Within a month or two of that, forecasters expect the lake to drop low enough to shut down Intake No. 1 if the proposed emergency connection isn’t made.

But the $12 million project could end up only buying the authority an extra nine months to a year. If the lake’s surface falls another 56 feet from where it is now, Intake No. 1 and its pumping station will stop working even with the new connection.